A group of alumni and their former faculty mentor who set about to reimagine the vintage analog synthesizer have received a U.S. patent for their innovative digital musical instrument.

During the 2015-16 academic year, Dan Sabatino, associate professor of mechanical engineering, presented a challenge to a multidisciplinary team of seniors—to create a new synthesizer that moved beyond the original technology yet matched its legendary sound quality. Sabatino’s challenge was inspired by a visit with a musician friend in California, who showed off a ’70s era analog synthesizer because he liked the sound quality better than its digital cousin.

Synthesizers went mainstream in the hands of pioneers Robert Moog, who used knobs and switches with an organ-style keyboard as the main interface, and Don Buchla, whose system involved variations of knobs and cables to give the user more intimate control of the music-making. 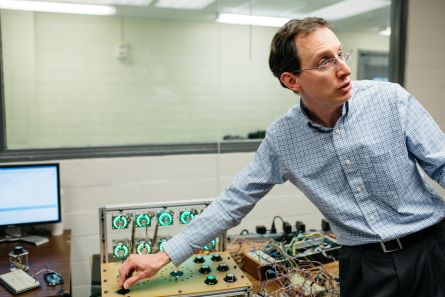 Early synthesizers spanned the pop and classical music spectrum, from the Monkees to J.S. Bach.

Where Moog’s synthesizer had a keyboard interface, “Spirit Guide” comes with an app for your phone or tablet that lets you shape the sound the synthesizer makes graphically. The innovation is that the knobs, patches, and buttons automatically set themselves to give the sound you want.

“Students were interested but had no experience with this equipment and what the industry, which is extremely mature, was looking for,” Sabatino says. “Those technologies matured to the point of obsolescence in late ’70s. To bring them back, in one respect, seemed very risky.” 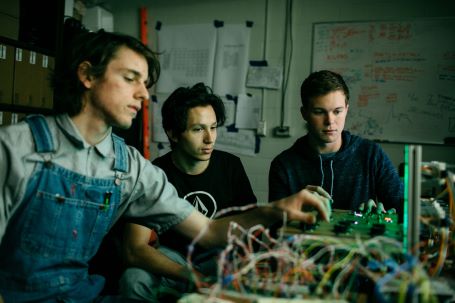 What interested him was placing the students in an area where many people could claim expertise.

“It’s almost instantly self-defeating; it would be easy to say that a contribution can’t be made here,” Sabatino says. “But people get to the point where they see an opportunity, not that they instantly know how to do it, but they believe that it’s possible that they can do something and start working.”

The team saw that opportunity and came up with the idea that kept the analog circuitry using a control system that turned the knobs automatically, creating an interface to build and shape sounds from the bottom up.

Like all inventions, the “Spirit Guide” had no magic behind it, says Sabatino, noting that others familiar with synthesizers also would have recognized that this was a possible innovation. The difference, he says, is that the Lafayette team turned it into a tangible idea that could be marketed and sold.

Their timing coincided with the College’s updated policy on intellectual property, which made it more attractive for students to develop their ideas while still at Lafayette. Patent applications take time and money, and Lafayette generously funded the process, Sabatino says. Lafayette owns the patent and the patent holders — Sabatino, his former students, and the Los Angeles studio that collaborated with them — have opportunities to receive revenue from their invention.

“It’s a nice example of what’s possible at Lafayette,” he says.

The patent also represents a significant accomplishment for a team that crossed into a field many could argue it wasn’t equipped to enter.

“But they worked very hard to deliver something new to a very mature field,” Sabatino says. “No one can argue that they didn’t make a contribution. That patent is the tangible evidence of that.”