The College honored more than 25 alumni and a faculty member at its annual Alumni Volunteer Awards Nov. 2 in Pfenning Alumni Center.

Alumni Association awards and their recipients: 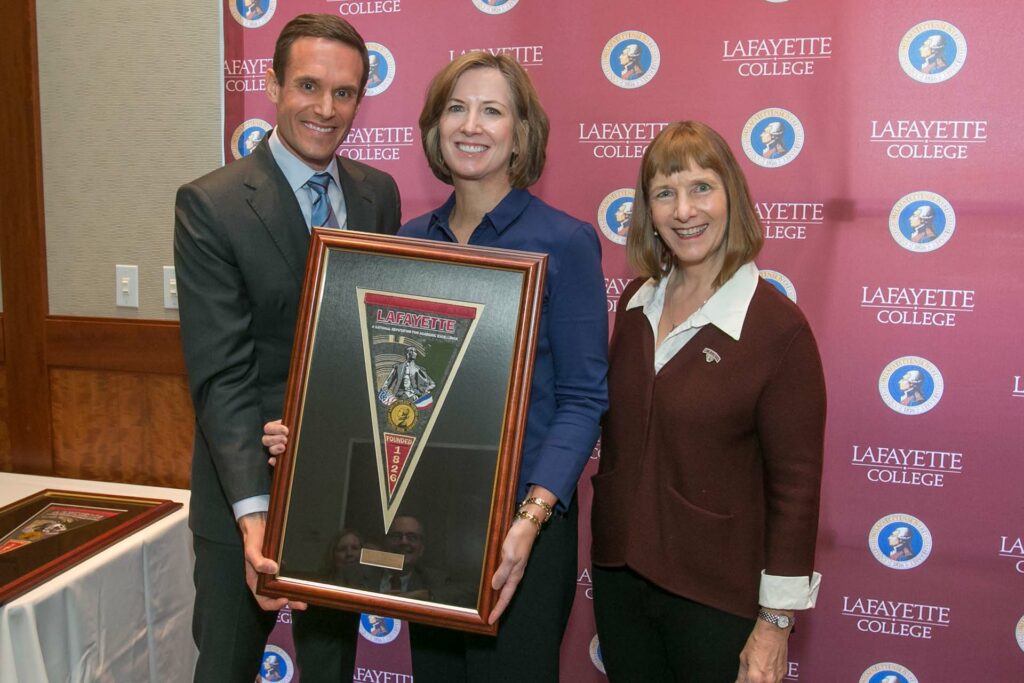 Cornelia “Cia” Buckley Marakovits ’88
Kidd Award. Presented to an alumna or alumnus who has earned distinction in their career without regard to service to the College. Named for Lafayette’s first graduate, George Washington Kidd 1836. 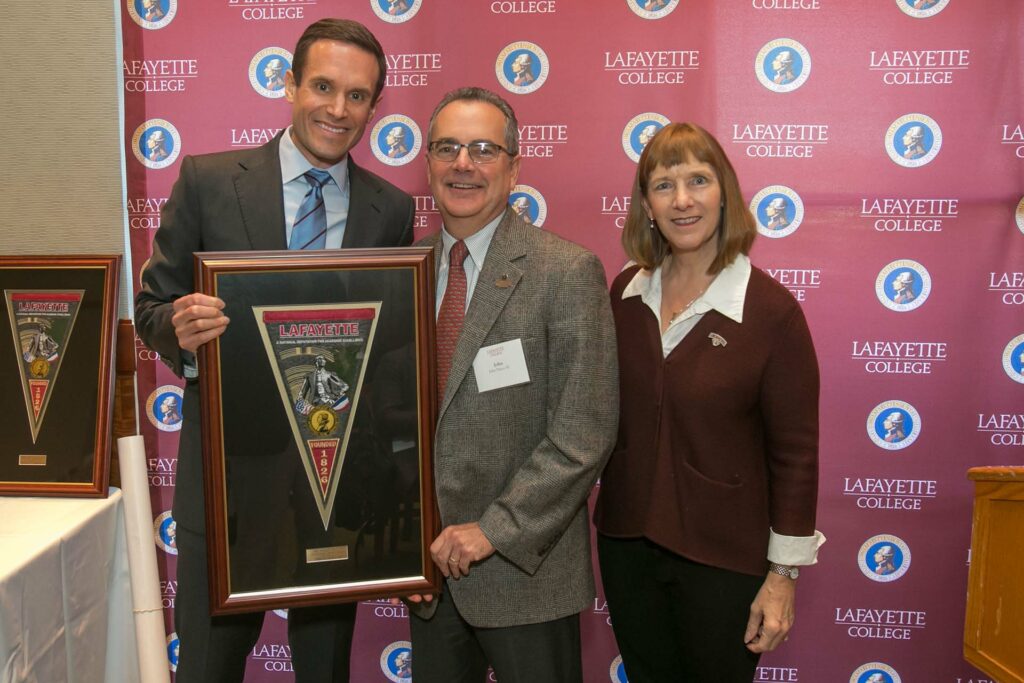 John H. Pierce ’81
Bell Award. Presented to an alumna or alumnus who has given distinguished service to the College or the Alumni Association. Upon his retirement in 1968 as alumni secretary, the award was named for Joseph E. Bell ’28. 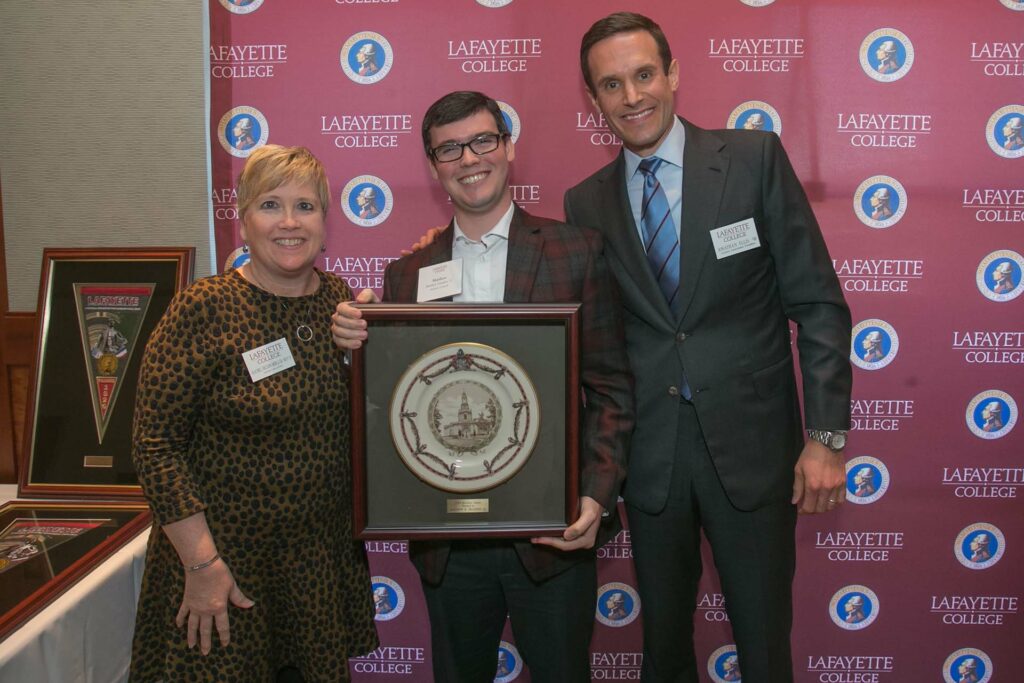 Matt Grandon ’12
Mayfield Award. Presented to a member or members of one of the 15 latest classes in recognition of outstanding service to the College or Alumni Association. Named for Clifton Mayfield 1909. 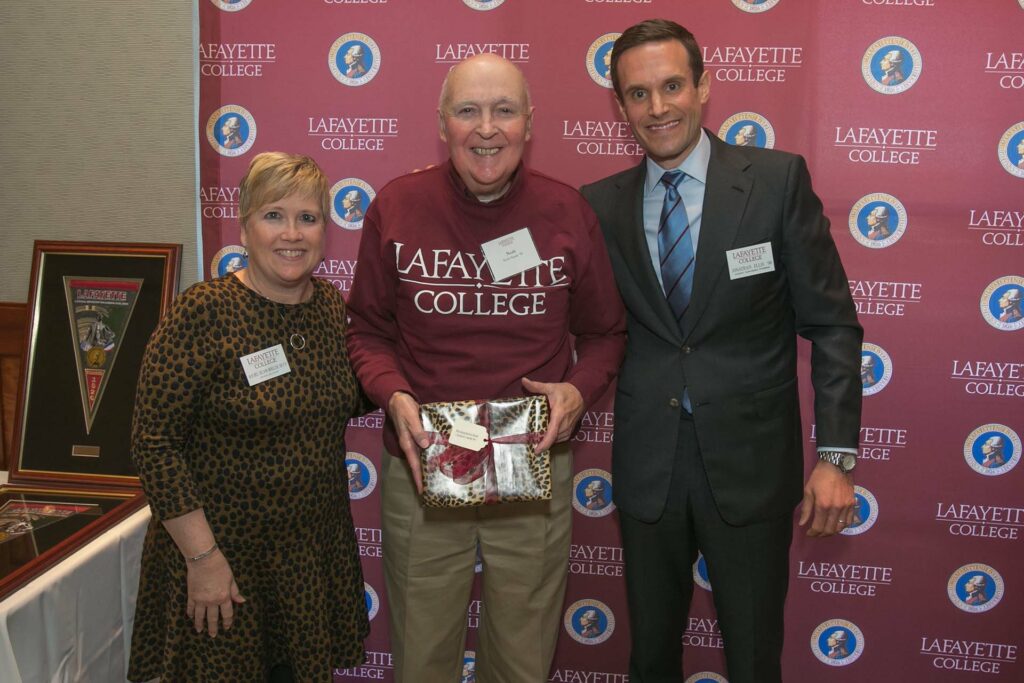 Norb Smith ’59
Woodring Service Award. Recognizes the achievements of a long-term Alumni Association volunteer whose service is both dedicated and effective. Named for George Woodring 1919. 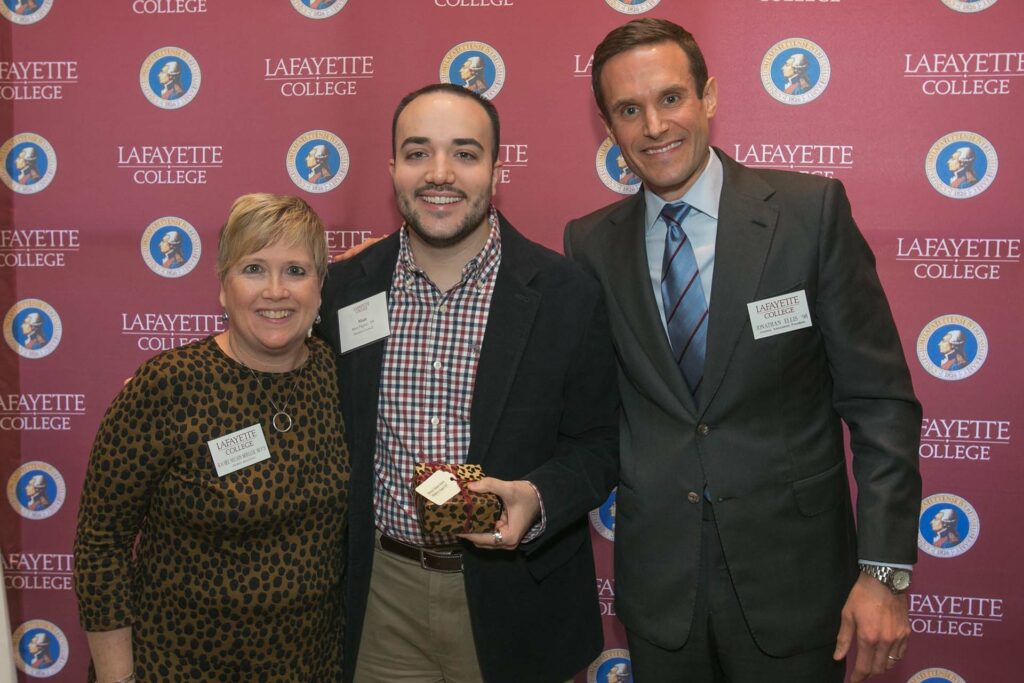 Matthew Pagano ’09
Greenip Award. Recognizes an active alumni chapter officer based on voluntary service achievements “over and above” his or her faithfully carrying out regular officer assignments. It honors the memory of William Greenip ’44, former Alumni Association secretary. 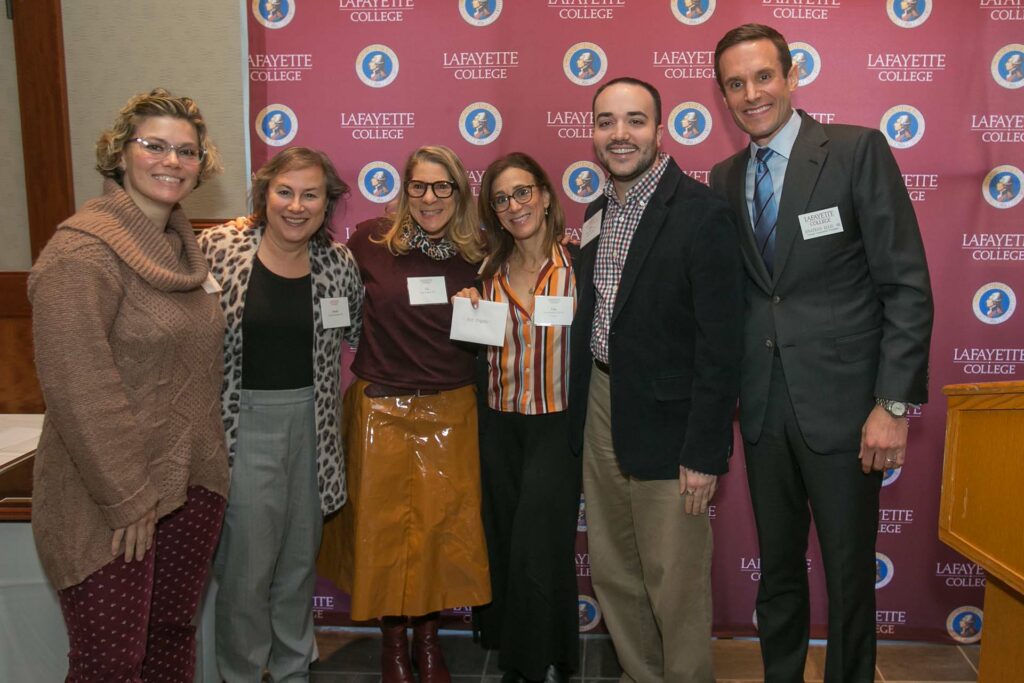 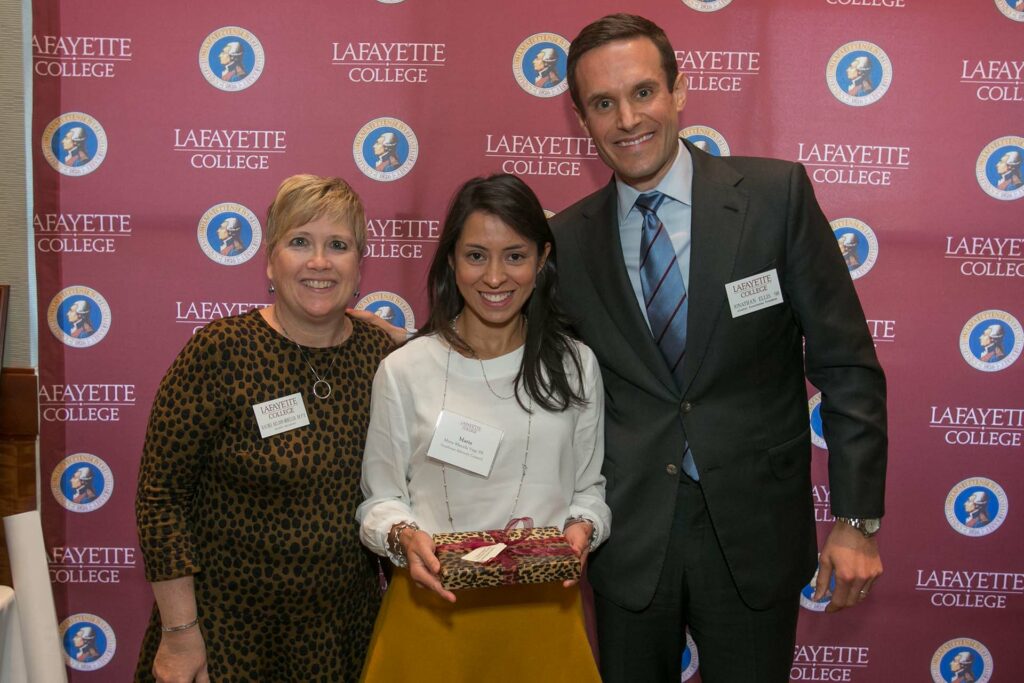 Maria Marcela Vega ’09 and Heather Slugaski Finn ’09 (not pictured)
Chapter Support Person of the Year Award. Recognizes an individual who continually strives to promote alumni activity and interaction within his or her chapter. 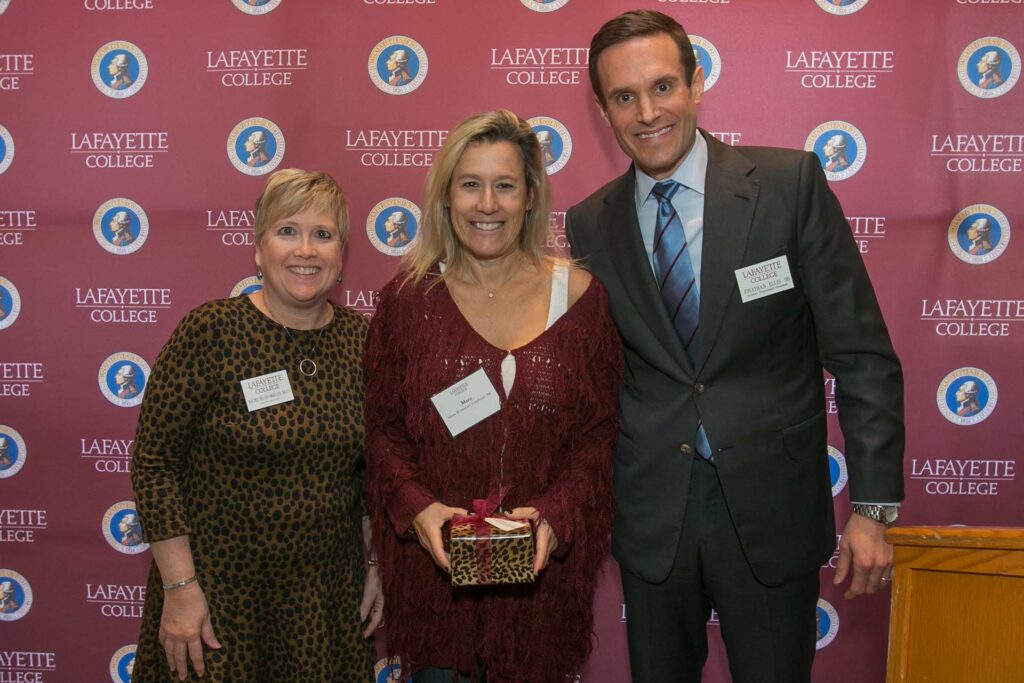 Mara Friedman ’94
Hughes Correspondent Award. Recognizes an effective writer who exercises class leadership through the column and unifies classmates in support of the College. Named for Wilson Hughes ’38. 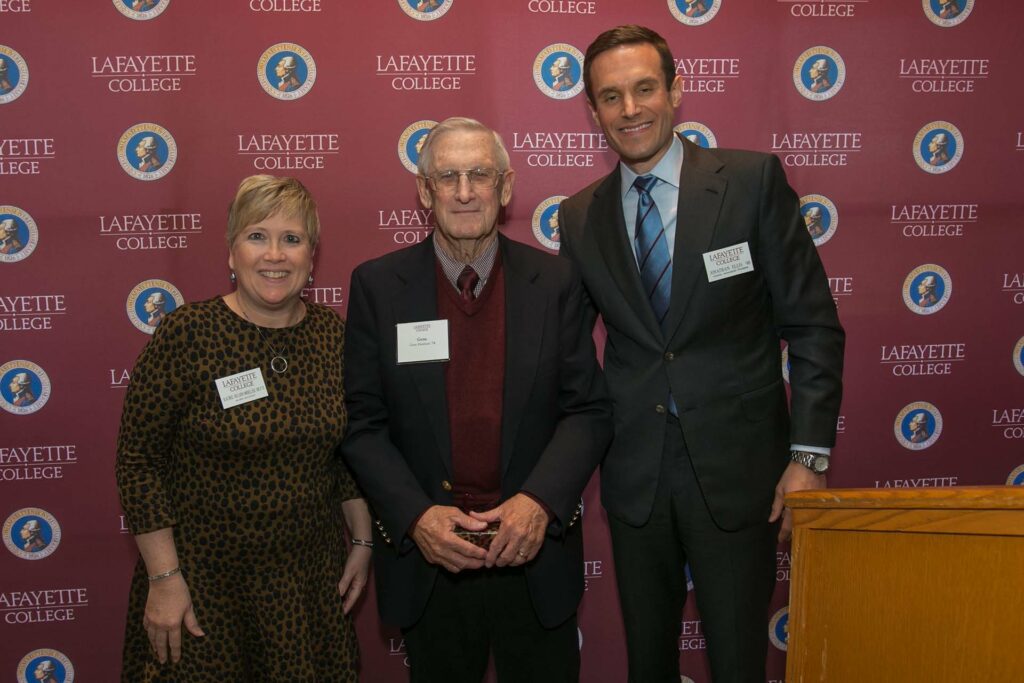 Eugene Harrison ’54
Huhn Correspondent Award. Recognizes a correspondent who actively seeks out and includes in the column many classmates from diverse regions and walks of life. Named for Elmer Huhn ’24. 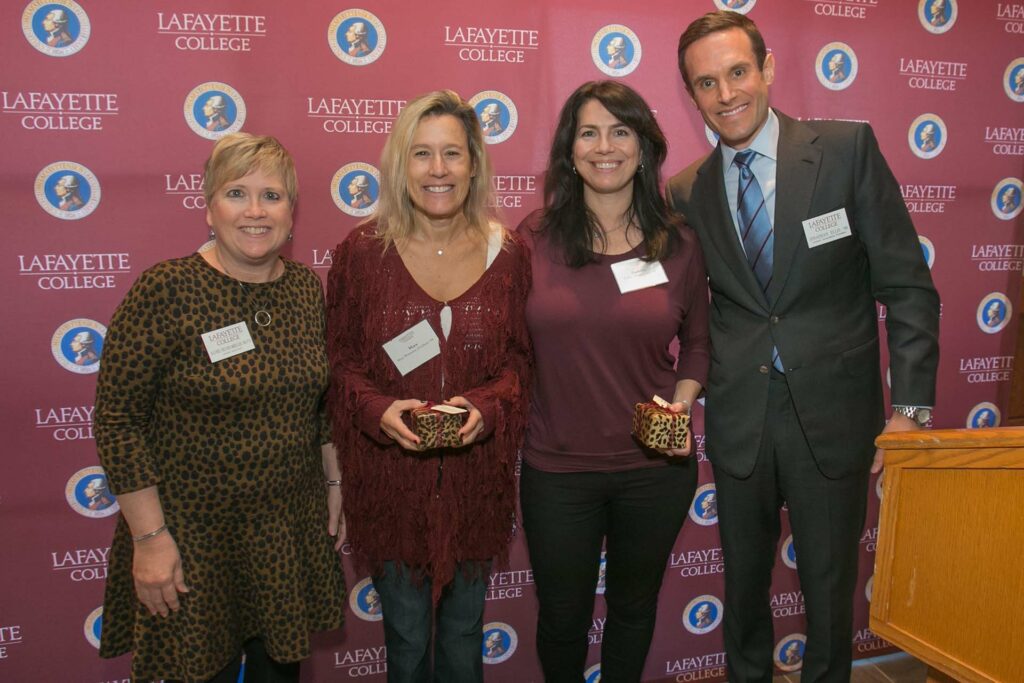 Kathryn Kerge ’94 (right), Lucy Maher Regan ’94 (not pictured), and Mara Weinstein Friedman ’94 (left)
Alumni Association Special Commendation
Presented to a member or members of the Lafayette community illustrating loyal commitment in supporting the goals of the College and Alumni Association.

Rebecca McIver ’15
Chapter Event Chair of the Year Award. Recognizes an individual who exudes leadership in the planning and execution of chapter events. He or she echoes a chapter’s commitment to promote a diverse array of events for alumni, parents, and friends of the College. 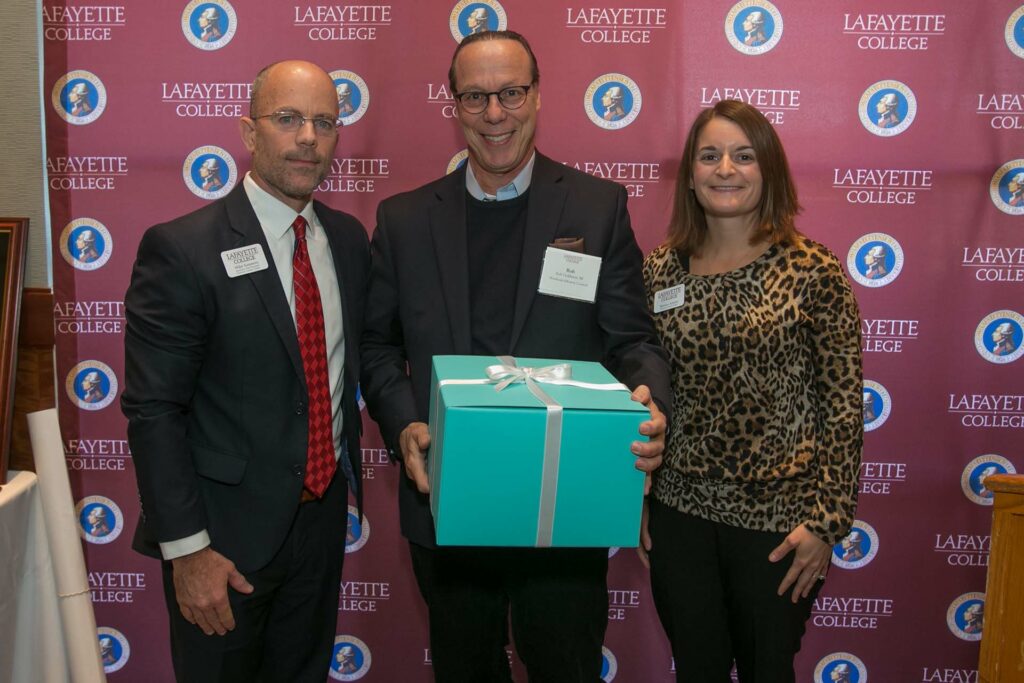 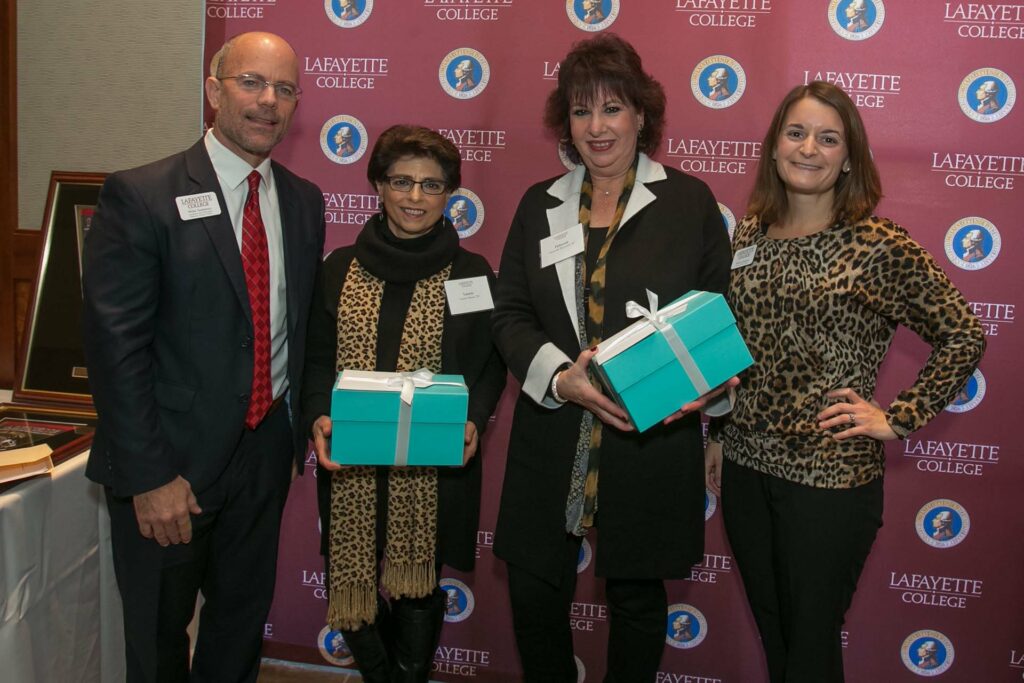 Annual Fund awards and their recipients: 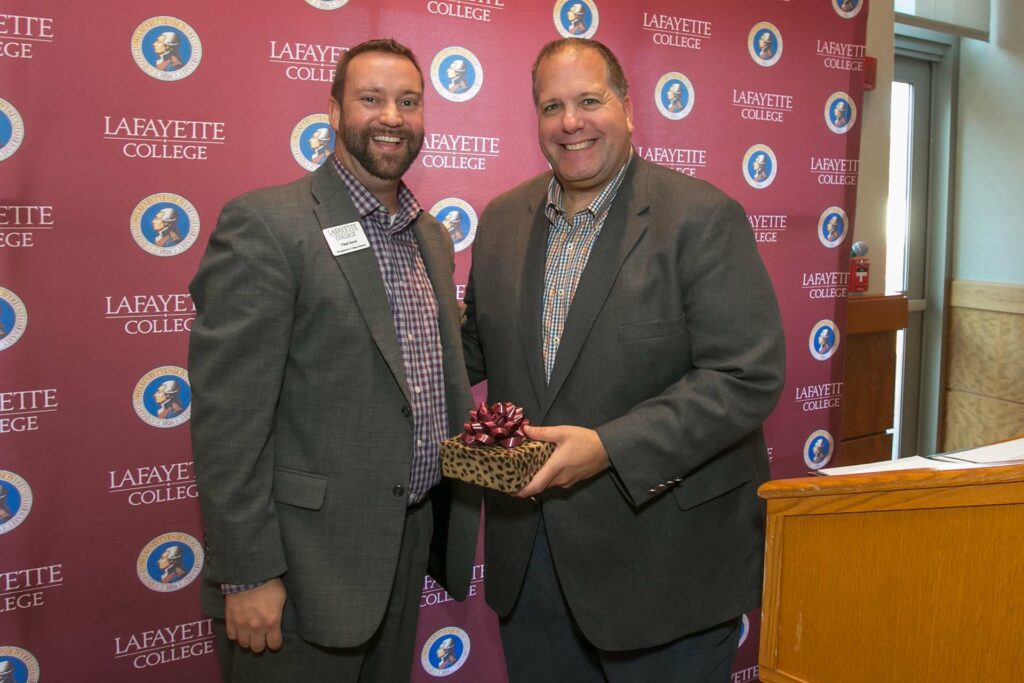 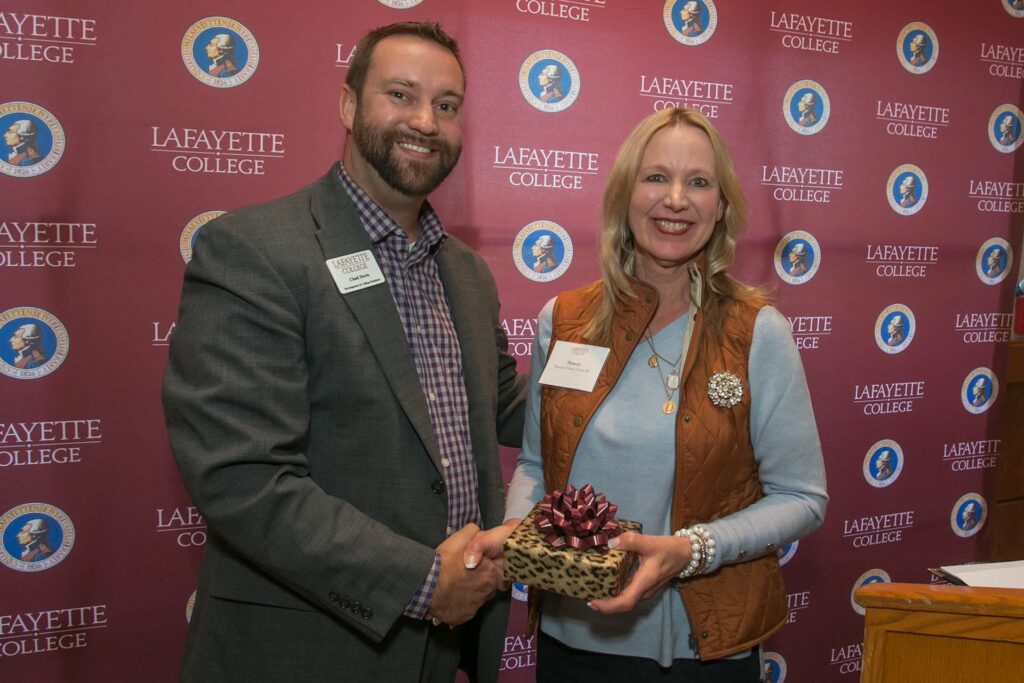 Class of 1969 – David Fraser ’69 and Bram Bluestein ’69
Ernest G. Smith ’94 Award. Honors the class achieving the highest percentage of participation from the 11th through the 50th alumni class. 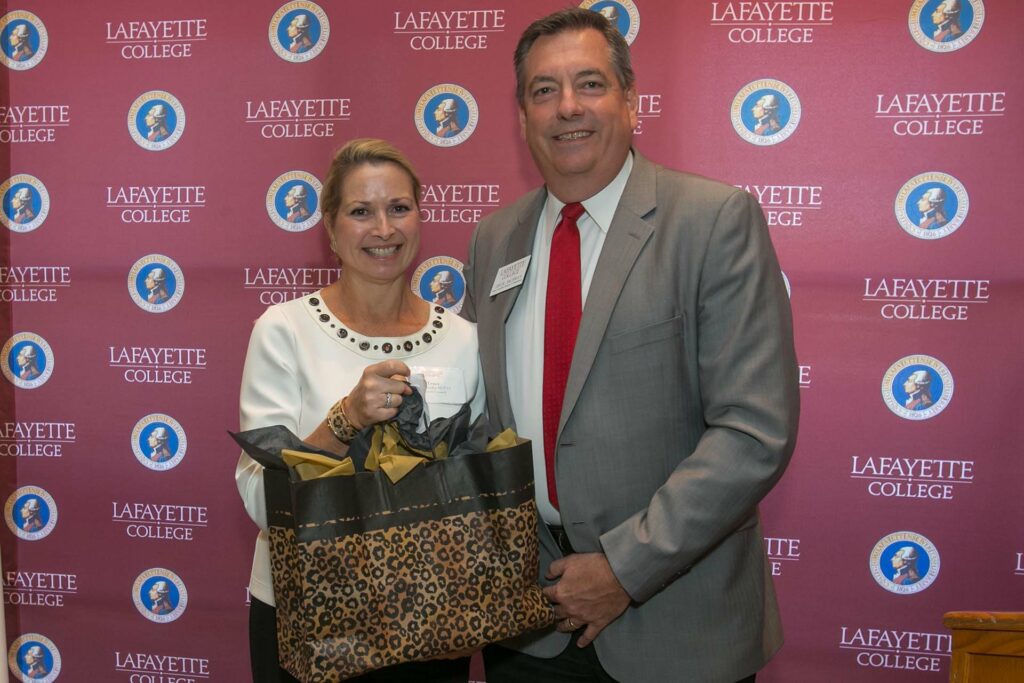 Tracy Hagert Sutka ’82 P’17
William G. Wilson Distinguished Service Award. This is the highest honor that can be bestowed for service to Lafayette through the AAR program. The recipient will have served with sustained distinction, effectively performing all expected duties during a period of several years or more. In addition, he or she will have demonstrated initiative and creativity, and will have inspired others through leadership and example.

Rachel A. Tenney ’18
New AAR of the Year Award. Recognizes a first-year AAR who has, during that initial period, served the College with extraordinary enthusiasm, commitment, and skill.

Jodie Obernesser ’89
Barry McCarty Award. Recognizes an individual who, during the past year, has represented the College through the AAR program with outstanding dedication, reliability, and sensitivity. He or she has creatively and effectively introduced the “Spirit of Lafayette” to prospective students, their parents, and others interested in the College. Named after Barry McCarty, former dean of enrollment services.

Anthony Ruegger ’82
AAR Geographic Outreach Award. Recognizes an AAR whose dedication and effectiveness during a period of a year or more have significantly improved Lafayette’s image and student-recruitment potential in an area outside the College’s traditional tri-state area.