Ten students in Prof. Mark Crain’s senior seminar for policy studies majors have sought experts across campus and the nation to take a deep look at the pervasive reach of artificial intelligence and its moral and existential consequences.

Their research, culminating in video essays on a broad spectrum of AI-related topics that will be broadcast on PBS39 7 p.m. Tuesday, is a continuation of Lafayette’s collaboration with the community-owned station that serves eastern Pennsylvania and New Jersey. Over the past several weeks, senior staff at the station have been working with students to polish their scripts, identify soundbites, and edit their videos. See the program.

Crain, who originated the PBS39 partnership along with Prof. Nicole Crain in 2012, has explored cybersecurity, immigration, autism spectrum disorder, autonomous vehicles, gene editing, and, most recently, imbalances in the local labor market. PBS39 also worked with the Crains on a live two-hour program that covered the 2016 national elections, which received a nomination for a regional Emmy award.

By taking on the vast, uncharted implications of AI, Crain and his students continue to impress their colleagues at PBS39, which produces the Lafayette Lens program.

“No one else is really tackling this subject matter in the way Prof. Crain is going at it,” says Yoni Greenbaum, chief content officer at PBS39. “Among our cohorts in the PBS world, this is cutting edge.”

The staff at PBS39 is there to guide and mentor students in their work, he says, adding that the student videos will culminate in a 60-minute program.

“The enthusiasm we see from Professor Crain and his students is unique,” Greenbaum says. “He’s willing to experiment and innovate in a way that a lot of other professors who I deal with at other campuses are not. We’re happy to tap into that.”

In their exploration of AI, Crain’s students are covering its implications on educational toys for children, gender bias, religion, hiring practices, and law enforcement, among other topics.

“The students’ creativity and progress has been remarkable,” says Crain, William E. Simon Professor of Political Economy and chair of policy studies. “The inevitable megatrend of AI and autonomous and intelligence systems presents a vital opportunity to demonstrate why the bridge between technology and the humanities is so important. Applications of AI technologies raise critical ethical, spiritual, and societal implications. Governments and mediating institutions are not keeping pace with AI innovations. We are going to need future leaders, like these fine students, who can envision where these trends are taking society; what the major challenges will be; and then propose solutions.”

In preparing the video essays for broadcast, Crain says the goal is to illuminate viewers about how AI is quietly affecting daily life.

“Most people are not aware of the ways AI is being used, and the extent to which intelligent systems are making ethical judgments,” he says. “The potential benefits from applications of AI are vast. At the same time, these applications may bring risks and potential pitfalls.”

For her essay on computer worship and the evolution of God, Kathryn Gonick ’20 (mathematics and policy studies) interviewed Jason Thacker, associate research fellow and creative director at the Ethics and Religious Liberty Commission of the Southern Baptist Convention and Rebecca Einstein Schorr, Lafayette’s Jewish chaplain. 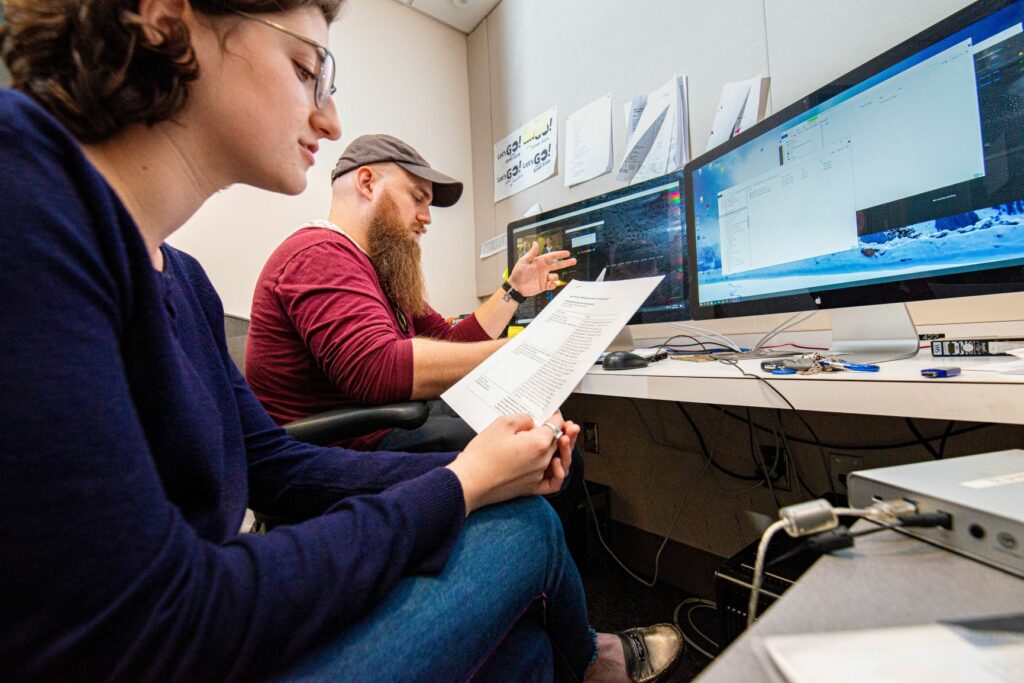 “I focused on how IA has found its way into our faith traditions,” she says. “I was expecting that there would be no expertise, that no one would have serious thoughts about this.”

But in talking with Thacker, she collected his concerns about how lack of awareness among believers and nonbelievers about connections to AI may lead to it making moral decisions.

“Rabbi Schorr has thought about it in the context of whether computers can participate in Jewish practices,” Gonick says. “Can a computer be treated like it’s the image of God in the way that we treat humans as being made in the image of God?”

Gonick has been so immersed in the topic that she’s now leading a program at Hillel Society on what she’s learned about AI and religion.

Tim Barry ’20 (policy studies) sought out Kevin Mandia ’92, chief executive officer at FireEye Inc., a security software firm, and a Lafayette trustee, about how AI is being used in cybersecurity and how companies and governments safeguard systems from cyber threats.

Danielle Thomas ’20 (chemistry and policy studies) interviewed Northampton County Judge Craig Dally ’78 about AI applications in the criminal justice system and found that the same bias exhibited in humans also can be seen in AI as well. 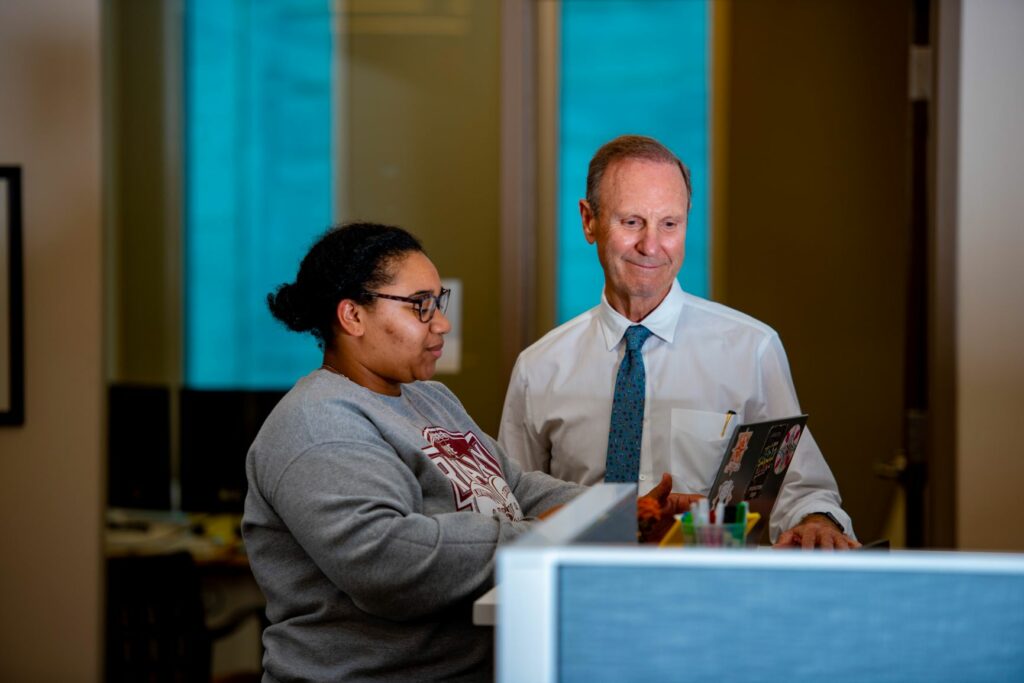 “AI is in our everyday lives without us truly knowing it,” she says. “It is interesting to see how exactly AI impacts our lives.”

Christopher Ambrosio ’20 (economics and policy studies) interviewed Eric Ho, assistant professor of biology, who’s also affiliated with the computer science department, about the context of AI and how humanity has evolved and acclimated itself with the technology. 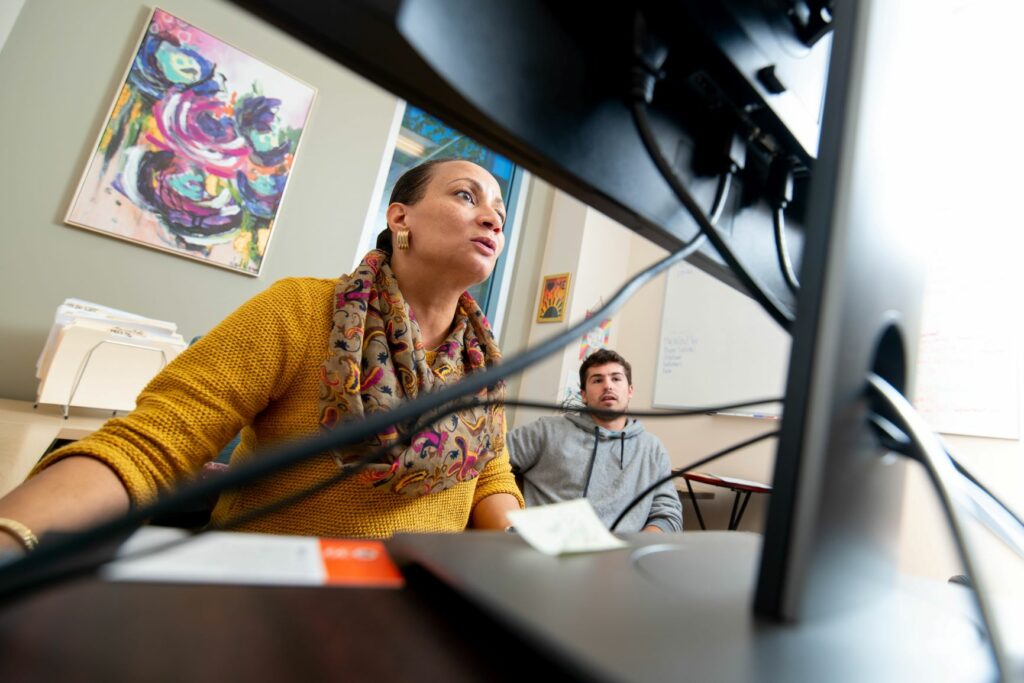 “It’s a slippery slope,” Ambrosio says. “Humans need to be cognizant of the risks of giving up power to intelligent machines.”