President Alison Byerly announced the establishment of a new Entrepreneur-in-Residence program to a crowd of faculty, staff, and students at Colton Chapel Monday evening.

The program was made possible by a lead gift from Don ’79 and Lauren Morel P’18. Byerly made the announcement before Morel delivered the President’s Entrepreneurship Lecture and Resnik Memorial Lecture.

“Tonight, we are especially grateful to Don and Lauren for their generous support to establish the Don and Lauren Morel Entrepreneur-in-Residence Program at the Dyer Center,” said Byerly. “The program will enable Lafayette to bring entrepreneurial leaders to campus to share their knowledge and networks, allowing the Dyer Center to expand to future industries.” 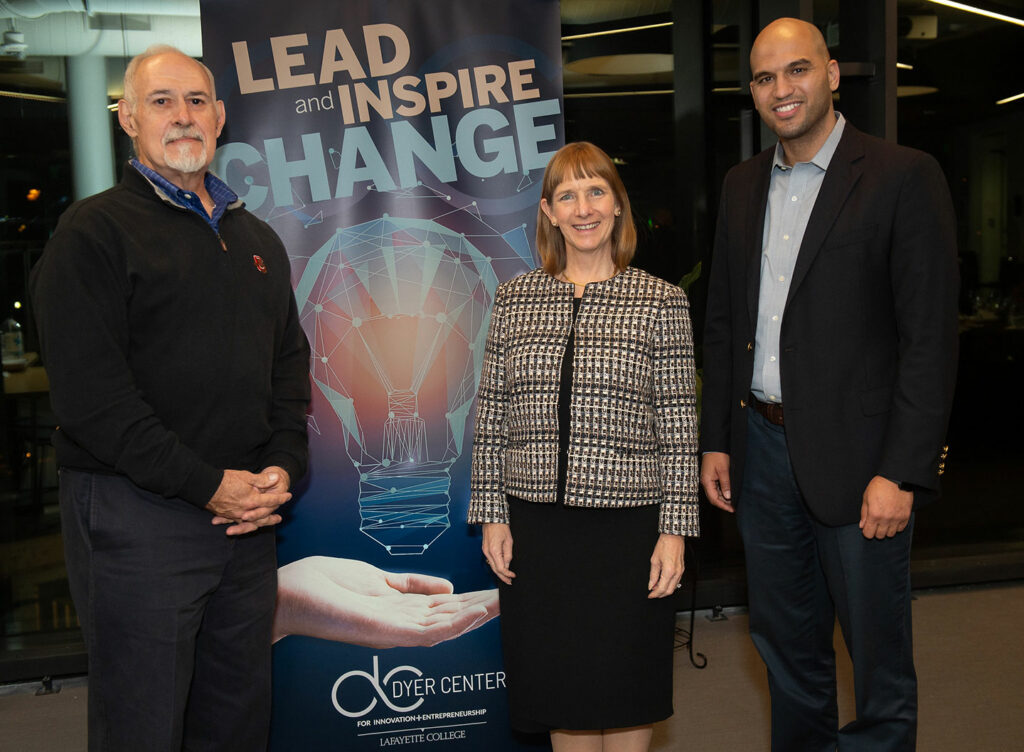 Don Morel Jr. ’79 P’18, President Alison Byerly and Yusuf Dahl, Director of the Bradbury Dyer III, ’64 Center for Innovation and Entrepreneurship pictured at the Dyer Center. Prior to Morel delivering the President’s Entrepreneurship Lecture on Monday evening, Byerly announced the creation of a new Entrepreneur-in-Residence program thanks to the generosity of Don ’79 and Lauren Morel P’18.

The recent gift will further the College’s continued efforts to grow a robust interdisciplinary entrepreneurship program, one that was initiated years ago through initial support from the Morels. Yusuf Dahl, Bradbury Dyer, III ’64 Director of the Center for Innovation and Entrepreneurship, acknowledged the Morels early philanthropy, which provided the base for the success of the Center today.

“For those who have been here from the beginning, have witnessed our starts and stops, triumphs and setbacks, there is one name they will cite more than any other: Don Morel,” said Dahl.

“Don provided the vision, encouragement, and early funding to experiment with a formal program for entrepreneurship at Lafayette. When the call was made to help the Dyer Center move to the next level of serving our students inside the classroom as well as out, he unsurprisingly answered.”

Establishing this program meets one of the Dyer Center’s core objectives—supporting Lafayette faculty in the development of courses and coursework that complement the co-curricular programming of the Dyer Center, allowing the Dyer Center and others on campus to create further interdisciplinary connections for students. The visitors will serve as mentors and advisers for students, collaborators with faculty, and resources for related initiatives.

Innovation and the Future of Healthcare

During the lecture titled Innovation and the Future of Healthcare, Morel discussed the current state of healthcare in the United States, integration with technology, and where the industry is headed in the future.

“The U.S. spends 20% of its GDP on health care—5 trillion dollars,” explained Morel.  “Seventy to 80% of this is spent on chronic disease, and only 20% is spent on acute care. The peaks and valleys of spending happen at the beginning of our lives when we are around 2 years old and then after 75 years old.”

Morel noted that despite this spending, healthcare outcomes in the U.S. do not match other developed countries. Competing factors include a strict regulatory environment, investors concerned with risk, and much more. At the same time, the greatest potential for biomedical research that we are going to see in our lifetime exists.

As the CEO of West Pharmaceuticals, Morel witnessed one of the greatest failures in pharmaceutical history with the company’s manufacturing of Exubera, a drug that could deliver insulin through the lungs as opposed to injection for patients with type 2 diabetes. With engineering success in the design of the product, and the prospect of making huge advances in patient compliance, the future was bright for Exubera. Yet, it failed.

“A lot of the reasons should have been obvious,” explained Morel. “It is very important to understand the countervailing forces between innovation and really good ideas and the requirements of regulatory folks and their obligation to protect the public. These two things often come head to head.” 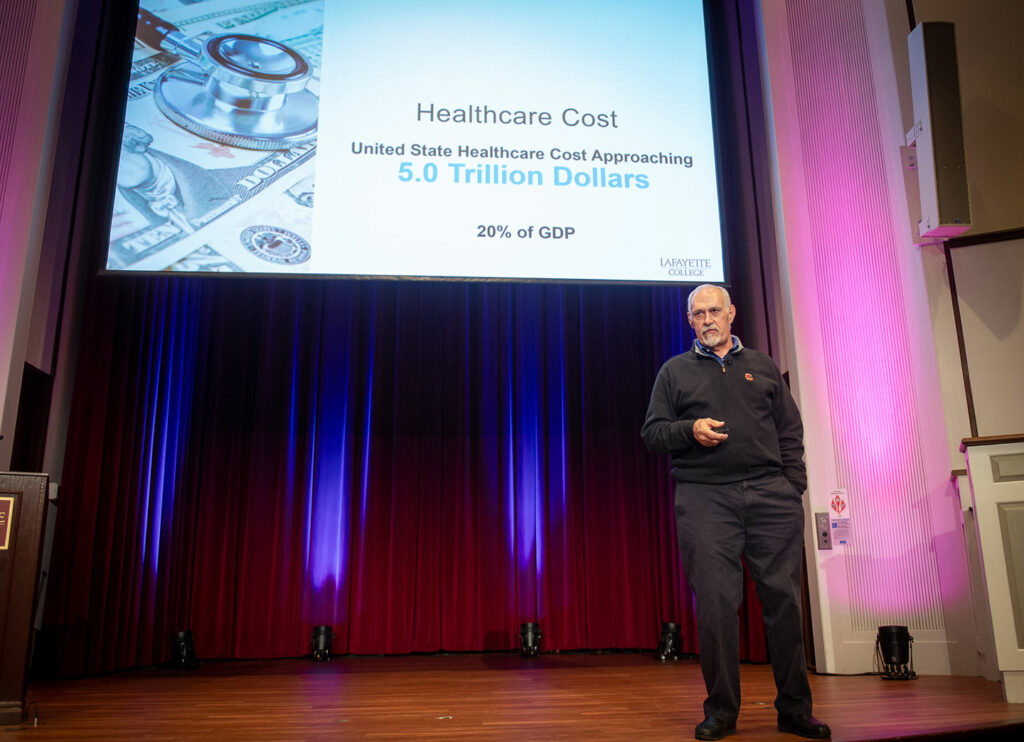 The Future Is Bright

Bioinformatics, artificial intelligence, data mining, molecular biology, and more are all areas that are going to transform healthcare. In addition, nontraditional partnerships are already disrupting the industry. Examples include CVS and Caremark, which have partnered to provide care through MinuteClinics, and Google with Fitbit and Ascension Healthcare, leading to health-related data collection and mining.

“In 10 to 15 years, through a blood sample, you will be given your complete genome stored on the cloud, and your medicine will be personalized. Your predisposition for genetic disease is going to be decided early on. As opposed to the standard physical, these genetic tests will be compared against your baseline throughout your life, and any mutations that occur will be addressed,” said Morel.

Prior support from the Morels funded the Center for Innovation, Design, Entrepreneurship, and Leadership (IDEAL). Many student-led projects were made possible by the IDEAL Center before it evolved to the Dyer Center more recently.

As chair of the Board of Trustees Committee for Grounds and Buildings, Morel was instrumental in the design and focus of the Rockwell Integrated Sciences Center. He not only shared his own personal experiences in building a state-of-the-art facility as CEO of West Pharmaceuticals, but lent his expertise to the Lafayette team as they traveled across the country to tour similar facilities.

A metallurgical engineering major at Lafayette, Morel holds a Master of Science in Materials Science degree and Doctor of Philosophy degree in materials science and veterinary medicine, from Cornell University. He is a graduate of the Executive Program at Darden School of Business, University of Virginia. Morel retired as chairman and CEO of West Pharmaceutical Services, designer and manufacturer of pharmaceutical packaging and delivery systems, in 2015.

He is author or co-author of more than 30 publications dealing with metal matrix composites, space environment effects on materials, polymer mechanical behavior, and electron microscopy of organic materials. Morel’s research has been supported by the National Science Foundation, NASA, Office of Naval Research, DARPA, and private industry. He was a finalist for assignment as a NASA Mission Specialist in the Astronaut Office and has served on several NASA scientific advisory committees.

Morel is the recipient of Lafayette’s George Washington Kidd 1836 Award for career achievement and was named a distinguished alumnus of Cornell’s College of Engineering.

A fellow of the American Institute for Medical and Biological Engineering, Morel is chair of the boards of the Franklin Institute and American Oncologic Hospital of Fox Chase Cancer Center. He is a director of Catalent Inc. and Integra LifeSciences and former director of Kensey Nash Corp. He is vice chair of the Travis Manion Foundation, supporting veterans in transition and families of the fallen.

A former Lafayette pitcher, Morel supported the renovation of Morel Field House in 2011, which features indoor pitching and hitting facilities for the College’s baseball and softball teams. The Morels also supported equipment in the biology department, allowing students and faculty to have access to cutting-edge technology. The Morels were inducted into the Société d’Honneur in 2013.

The President’s Entrepreneurship Lecture is sponsored by the Bradbury Dyer, III ’64 Center for Innovation and Entrepreneurship, Office of the President, Department of Biology, Lafayette Athletics, Division of Engineering, and the Farber Memorial Endowment Fund.

The Resnik Memorial Lecture is named in honor of Astronaut Judith A. Resnik, an electrical engineer who lost her life in the Challenger space shuttle disaster on January 28, 1986.