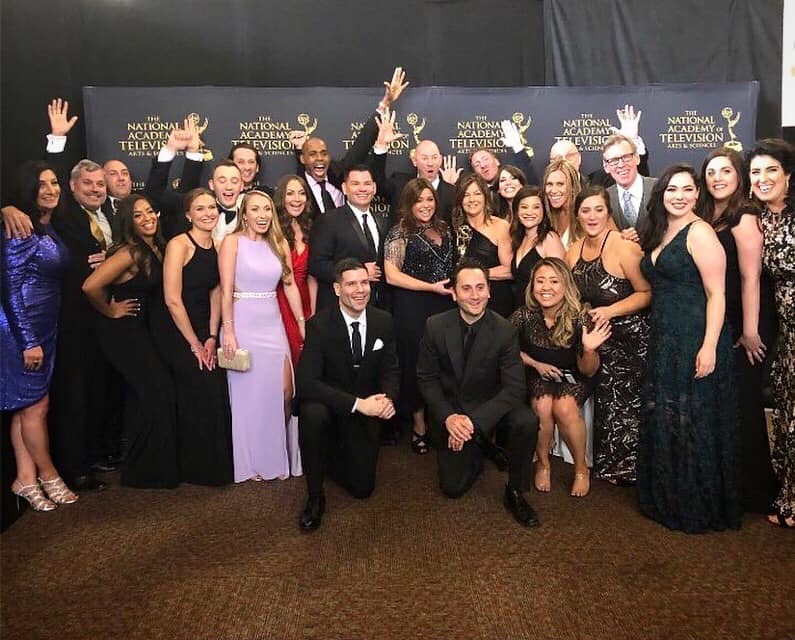 What began as an internship at Good Morning America during her junior year at Lafayette has transformed into an Emmy-winning career in television. Throughout it all, Jen Gsell ’04 has enjoyed a journey that moved from terrifying haunted houses in Maine to cruise ships to Bermuda with New Kids on the Block. That journey culminated (thus far) with her daytime Emmy win for Best Informative Talk Show as a field producer on the Rachael Ray show. Learn about her career, new hardware, and the impact of her time on the Hill. 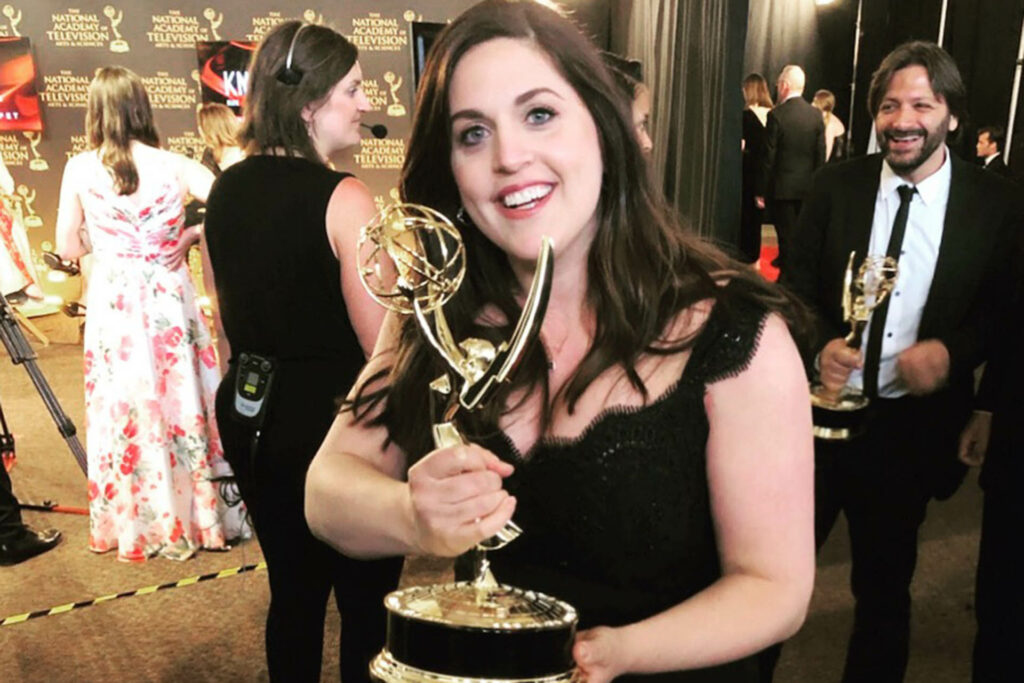 It’s on the entertainment console in the family room. It’s a very fancy bookend. My husband won an Emmy in 2013 for his work as a producer on the MTV show MADE. He and I met while working on that show, and I was proud of him and excited for him when he won. It’s nice to win one too! They both share the spotlight and sit below the TV.

Tell us about the win.

The producers flew out to Los Angeles for the ceremony in May. We were up for Best Informative Talk Show with other nominees including Dr. Oz, Jada Pinkett Smith, and Kathie Lee and Hoda. What an unbelievable experience! Then when we won, I was in total shock! It was one of the most exciting moments of my life. After that it takes months to get mailed your actual award, and it was the most amazing present to land on my doorstep.

Where did your career start?

I was interested in broadcasting and was fortunate enough to get an internship the summer before my junior year at Good Morning America, where I had the chance to work with Diane Sawyer and Robin Roberts—and they were such inspiring women to look up to. That was a great learning experience. And then after graduating, I eventually landed a production assistant job at MTV, working on a show called High School Stories, which made reenactments of pranks and scandals from high schools across the country.  After that, I had many other great experiences like my time working at HBO on a real-life version of Sex and the City.

Then things got weird.

They did! I became a field producer for several paranormal shows including Paranormal State, Psychic Kids, and The Haunted.

What does a field producer do?

It depends on the project. I direct the field crew and oversee all aspects of how we’re telling a story on location—most importantly the look and the content—while making sure we have all the pieces we’ll need for post-production. Sometimes I even cast the subjects as well.

I was in rural Maine at a house in the woods. Our expert for the episode was Lorraine Warren (from the Conjuring movies), a noted paranormal investigator and demonologist. On that set, the director got so scared he quit, and Lorraine told me not to go in the house because of a dark energy she felt was there. People familiar with her are shocked when they hear that because she has been so many scary places. Of course, I had already been in the house and had to go back in again. I had a job to do! But it’s incredible to me that the location even scared Lorraine!

So will you verify your IMDb profile, which says you are now a believer?

I don’t know how IMDB knows that, but, yes, I am now a believer after working on those shows!

Is it true as well that you have a tattoo of your grandmother’s signature?

I do! Again, I am not sure who is telling IMDb these things. I got it right after wrapping as a producer on season one of Ink Master. It was done by one of the artists who competed on the show.

Like the paranormal shows, you also have many music credits.

That’s the exciting thing about a job like this. You jump from one genre to the next and get fully immersed in a new world. It never gets boring. I did work on two seasons of Rock This Boat, a show about the cruise the New Kids on the Block take with fans. It was a crazy life moment for me since they were probably my first crushes. And they are awesome guys who work very hard. I also worked on the Ke$ha documentary series, and VH1’s Love & Hip Hop: Atlanta.

So why the jump from traveling to being fully based in NYC?

I wanted to focus more on post-production, and to become well-versed on that side of things as well. So I spent a number of years working in post. And now I’m glad to be based at home, because I’m pregnant—due in December. We are having a little girl!

Congratulations on the baby!

Thank you. We are excited and as ready as you can ever be. As two producers, my husband and I figure there’s no way to overprepare for something like this. And wanting to have a family, I felt like it was time for me to find a more stable, longer-term position. And now that I’m a part of the amazing team at Rachael Ray, I have that stability. And the best part is, I get to go to work every day at a job that I truly love. I can’t say enough good things about my co-workers on the show. A big part of what makes winning the Emmy so rewarding for me personally is that I get to share it with such an extremely smart and dedicated group of people.

What do you do on Rachael Ray?

I produce and direct the field pieces and then prep them for an editor to take them over in post. I get to tell some really beautiful stories, like a recent segment we did on a war hero who needed new prosthetics. So it’s uplifting content. I also spend a lot of time in the culinary space, highlighting great restaurants and chefs. It’s always varied, and always interesting.

How did Lafayette get you ready?

I always wanted to be a storyteller and loved being an English major for that reason. I remember Professor Bryan Washington encouraging students to look at the world from a different angle, and that really resonated for me. Professor Lee Upton brought an energy and enthusiasm that made going to class a joy. Through it all, storytelling has been the center and the focus. There are so many ways to use an English degree, and it really translates well to TV.

Have you considered Emmy for a girl’s name?

Emmy would rhyme with her and her dad’s last name, Crenny, so it is officially out of the running. I couldn’t do that to our child!