"I’ve always felt a strong loyalty to Lafayette College because it set me on the path that I have followed for my entire life,” says donor Cyril Lang '49 Twitter

Cyril Lang ’49 has never stopped asking why in his pursuit of knowledge and believes there is no greater gift than to have familiarity with the humanities.

With that philosophy and an eternal affection for his alma mater, he has made the lead gift for a humanities center initiative at Lafayette.

Lang’s gift, announced to faculty Dec. 3, will support the humanities in his name and comes at an ideal time as the College develops its six areas of academic focus, with one of them specifically targeting the humanities.

Planning is still in the early stages, but establishing a humanities center would serve as an umbrella for a variety of humanities activities for students, providing deeper exposure to the humanities in both content and methodologies to enhance and enlarge the classroom experience.

Lang’s gift could support seminars or colloquia where, for instance, scholars in residence would engage with Lafayette students and further awaken their appreciation of great literature, history, philosophy, and ancient languages and demonstrate how these subjects can stimulate deeper thinking in other areas of study.

“We can’t thank Cyril enough,” Dubischar says. “Nowadays, there is support out there for exciting endeavors for various kinds of ‘applied humanities,’ where humanities get engaged in the community or form partnerships with other disciplines. That is great and much needed.

“At the same time, it is sad that it has become harder to find support for what the humanities perhaps are and do at their core,” he adds. “That is, to expand the minds and enrich the lives of our students by letting them engage and wrestle with deep and impactful works of thinkers, novelists, artists, composers, and poets of the present and the past. And this is exactly what Cyril Lang’s donation aims to support and explicitly prioritizes, which makes this gift especially precious to us. As I said, we can’t thank him enough.”

A lifelong journey with humanities

Lang majored in philosophy and minored in English, psychology, history, and classical Greek at Lafayette, where he developed an unquenchable appetite for the classics. He received a master’s degree in theater and English from University of North Carolina. 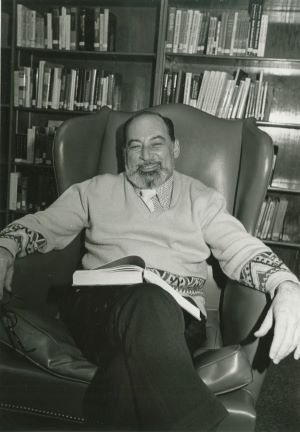 A veteran of World War II, Lang progressed in his career from selling encyclopedias door to door in his native Newark, N.J., to directing theater companies and finally teaching high school English in Rockville, Md., for 25 years. In retirement, he spent several years in sales for a publishing firm in Europe, then headed to Kitsap Peninsula in Washington state, assuming a management position once again with Encyclopedia Britannica. In his spare time, he volunteered for the Peace Corps, leading graduate school seminars for teachers in the Philippines and also directing theater productions at three universities in that country.

“I’ve always felt a strong loyalty to Lafayette College because it set me on the path that I have followed for my entire life,” he says. “I’ve always asked the question why. I gravitated toward that at Lafayette.”

Lang’s robust coursework at Lafayette, which included modern philosophy through Kant, laws of correct reasoning, ethics, philosophy of religion, Greek tragedy, and European history, supported his pursuit of unanswered questions and nurtured his staunch belief in academic freedom and enriching students in literature beyond the standard curriculum.

Lang made national headlines in the early 1980s when he was suspended for insubordination from his teaching job at Charles W. Woodward High School in Rockville, Md. His offense was teaching literature not approved for sophomores, including Aristotle’s Poetics and The Prince by Machiavelli, as part of a course on Shakespeare’s Julius Caesar.

Lang taught the children of U.S. senators and Supreme Court justices in an affluent school known for sending a high percentage of its graduates on to college.

In a 1980 interview with the New York Times, Lang described his students as “bright but apathetic,” a result of too little challenge. He explained that he did not assign the books to his 10th graders as required reading. In fact, Lang discussed with his students whether to introduce the two books. Four of his classes voted in favor and one against, and he abided by the vote.

“There’s nothing wrong with the genetic makeup of these students,” Lang told the Times. “It’s the educational system that’s declining. We are bearing witness to the triumph of mediocrity.”

“Machiavelli’s The Prince is a classic and nothing to be feared. The language may be difficult, but I explained it all,” he says. “It was fun. My classes were all discussion classes. I always took the unpopular view, and we argued like hell and asked why, why, why. Students knew what I was doing. Frankly, I never had a boring day playing devil’s advocate. It’s stimulating.”

The importance of humanities

Lang, 94, firmly believes that the humanities introduce students to the finest minds of the Western tradition, expand horizons, and expose them to great philosophers, knowledge that can be used in any occupation.

“I could go on and on about that—when you specialize, especially today, there is no greater gift than to have some familiarity with the humanities so you can have a more global perspective,” he says. “It disturbs me when folks concentrate on just one field and limit their minds. This is a gift that the ancients have given to us, and we should embrace it and not be restricted. Humanities can enlarge the perspective of life.”

He says his humanities education at Lafayette prepared him to persevere throughout his career, particularly during the challenges he faced as a teacher who advocated independent thinking.

“You just keep going and always pursue; you don’t sit still and let the world pass by or give up when it gets tough,” he says. “You don’t stop learning when you graduate from college; it’s just the beginning. The classics are the foundation of learning from the finest minds of our culture.”

“It is my alma mater, and I have wonderful feelings of what Lafayette did to and for me,” Lang says. “Lafayette and I had a love affair in philosophy and history. I believe I may have been the only philosophy major at the time. I spent countless hours at the library reading about the great minds.”

Lang wants students to realize that learning is forever.

“Great minds have much to teach us and the answers to ‘Why are we here?’ are critical for every human being,” he says. “The why makes us different from base animals.”