During a prolonged heat wave, utilities often will ask commercial and residential customers to curtail power consumption, particularly from energy-consuming air conditioning systems, to reduce strain on the electric grid.

Amy Van Asselt, assistant professor of mechanical engineering, is researching strategies to increase the use of renewable energy sources that are inherently intermittent and weather-dependent to power air conditioning systems and relieve stressed electricity delivery systems during times of high demand.

Her research idea is to use available renewable power sources to charge cool thermal energy storage systems, which use chilled water or ice to provide cooling. These systems act as a thermal battery and offer a mature and cost-effective alternative to lithium-ion battery storage. 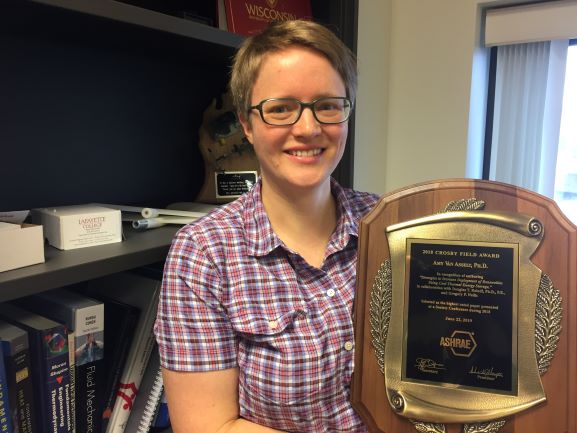 Van Asselt and her graduate school advisers, engineering professors Greg Nellis and Doug Reindl at University of Wisconsin-Madison, recently received the prestigious Crosby Field Award from American Society of Heating, Refrigerating and Air-Conditioning Engineers (ASHRAE) for their paper detailing the research. ASHRAE presents the award annually to the authors of the highest-rated paper presented at a technical session, symposium or poster session, or society meeting in a given year.

One of the situations addressed in the paper is large electricity loads from commercial air conditioning systems, which require chilled water to be circulated through large buildings. Van Asselt says chilled water can be stored in these thermal batteries to help the grid’s reliability during times of high demand for electricity.

Van Asselt notes that Chicago’s McCormick Place convention center uses a massive chilled water storage system for its air conditioning needs. The meeting of building cooling loads is decoupled from operation of the chiller, allowing it to run at night when outside air is cooler and the chiller can operate more efficiently. High demand during the heat of the day is then met using the stored chilled water.

“Frozen water can be stored in a thermal battery—that’s what this particular research makes use of,” she says. “The idea has been around for several decades to save money on electricity costs during times of high demand and associated high rates. Reducing peak power demand is the goal. You produce ice in the middle of the night and use it to meet cooling loads later in the day. This research pushes the technology further by carefully controlling the systems to make use of available renewable power. This, in turn, allows for greater penetration of renewables into the electric grid mix.”

“There is difficulty in getting younger engineers interested in the heating, ventilation, and air conditioning field,” Van Asselt notes. “But I think in many areas of HVAC research we can tie HVAC systems into sustainability, an area that is of great interest to engineering students and young professionals.”