Taking the crowd out of the game never happened even as the Lafayette men’s basketball team trailed the defending Patriot League champions by 15 points in the second half. That crowd was fueled by over 1,200 fifth and sixth grade Easton Area School District students whose chants of “Let’s go, Leopards” shook the maroon beams of Kirby Arena.

Those chants never subsided and only grew stronger as the team went on a 13-0 run over a two-minute stretch. Lafayette soon took the lead and played back-and-forth ball until guard Tyrone Perry ’22 hit a game-winning 3-pointer with less than three seconds to play.

“The School Day game is one of the most exciting, meaningful, and energetic events that we support,” says Art Kney, professor of civil engineering and director of Landis Center for Community Engagement.

The center in partnership with Lafayette athletics, Easton Area School District, and Wells Fargo made the day come alive. It began with fifth graders from every school in the district converging on Kirby Sports Center.

The students were divided into smaller groups and met with student-athletes from various teams, including men’s lacrosse, track and field, and baseball. Those athletes led hands-on fun with shooting competitions and relays.

Then they led the fifth graders through a discussion of how they use the principles in the district’s “Leader in Me” program based on Stephen Covey’s The Seven Habits of Highly Successful People.

To help get them game-ready, the final task was learning key cheers  and, of course, the wave.

That training paid off as the lights went out and the team was introduced.

By that time, all area sixth graders had arrived and tapped into their memories from last year’s School Day game.

That continuity is the key and what attracts community sponsors like Wells Fargo.

“We want to give back to the community and build connections with the students, teachers, and College,” says Paul Story, Wells Fargo vice president and district manager of the Eastern Lehigh market.

The financial institution and Lafayette student-athletes, as part of the partnership, will visit every school and talk with students about leadership and financial decision-making as well as read to the class. Wells Fargo also donated a cinch sack and book to each student.

“Our athletes do a phenomenal job in helping put this day together,” says Sherryta Freeman, athletic director. “It is a real credit to the staff here at the College and at the school district and Wells Fargo that we could do this for a second year and make it bigger and better.”

“Today illustrates the strong collaboration among the College, the school, and the Easton community,” says Tracy Piazza, director of teaching and learning for grades K-5. “Our fifth and sixth graders can see the campus, build relationships with college students, witness leadership, and set their sights higher as they get a feel for what college is like.”

“Working with the community like this is what students most enjoy,” says President Alison Byerly. “They get to demonstrate the work and fun that is part of a college experience.”

The off-court success for this event came from the hard work of Mary Wilford-Hunt, senior associate director of corporate, foundation, and government relations. “We are thankful for her partnership and drive to do what’s best for our community,” says Pany.

The on-court success wasn’t limited to the big win. The team celebrated the entry of guard Justin Jaworski ’21 into the 1,000-point club. 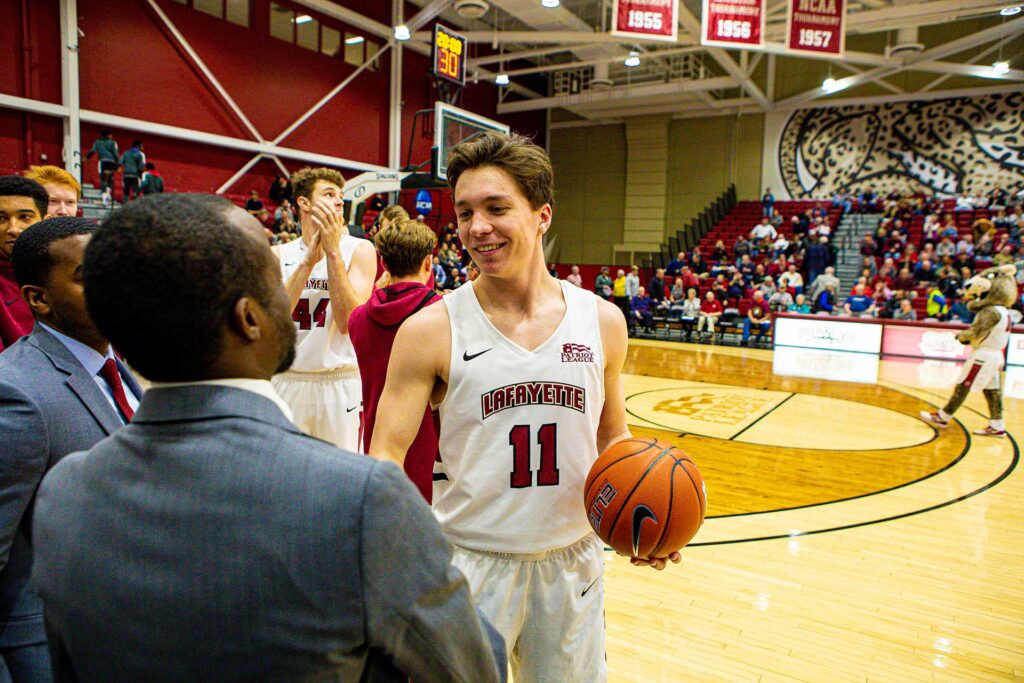 Biggest of all was Perry leading the sixth graders in cheers following his game-winning shot.

“For these kids, the magnitude of today’s event is NBA level, but it is happening in their own backyard,” says Easton Mayor Sal Panto.