Model U.N. is an extracurricular program in which students roleplay as U.N. delegates and simulate the work of U.N. committees. The immersive experience not only educates students about policy work, it also enhances students’ research, public speaking, writing, collaboration, and leadership skills.

Prior to the conference, Lafayette’s Model U.N. club members were given their designated country: Belarus. They also were assigned to various United Nations agencies, including the Economic and Social Council, in which they were tasked with developing ideas and solutions for engaging youth in building partnerships for sustainable development. 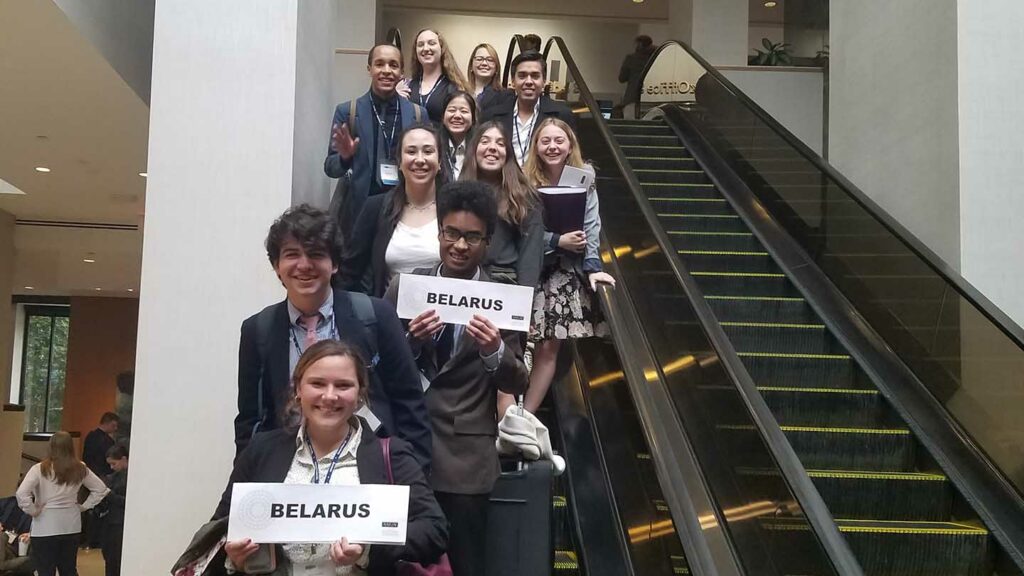 To prepare for the event, students conducted extensive research on Belarus to understand the country’s positions on relevant topics. Their research went into a position paper that they took to the conference.

At the event, which spanned about two days, the students collaborated with each other as well as students from other institutions to write a resolution. After several rounds of debate and revision writing, their resolution ultimately passed.

Caleb Gallemore, assistant professor of international affairs, serves as the club’s adviser and accompanied students on the trip.

“I did Model U.N. when I was in college, and it was extremely valuable to me personally,” Gallemore says. “If you want to do well, you need to do a lot of background research. It’s almost like a theatrical production, in that you need to build an accurate backstory and represent your role as a delegate convincingly.

“To represent Belarus, you not only need to know how they would act when presented with a problem or situation, but you need to be able to give a coherent argument and make your position on the issue relevant. It’s a very high-quality educational experience.”

Sofia Khalek ’22, an international affairs major, is the club’s treasurer. She helped to recruit students to join the club in the fall and to participate in the conference, at which she was Belarus’ representative for the Economic and Social Council.

“This was my first Model U.N. conference, and it was a really great experience,” Khalek says. “We worked with students from all over the world who represented other Model United Nations delegations. It was valuable to get to talk about issues that are relevant in today’s world. It involved a lot of debating and discussing. It felt very authentic.”

What’s next for the club? Students are planning to participate in the Model Arab League Conference, which will focus on countries in the Middle East and North Africa.