It was during a chance visit to Lafayette during her junior year of high school that student-athlete and West Philadelphia native Kareema J. Gray ’94, knew she had found her second home. Had it not been for her best friend’s parents—who are Lafayette alumni—bringing her to see the campus for the first time, she may never have heard of Lafayette at all. And, eventually, the field of social work may never have been graced by her many significant contributions as a professor, medical social worker, and social activist.

“When I started visiting different schools, I just threw Lafayette on the list because my best friend’s parents talked about it all the time,” Gray says. “I wanted a strong academic program, but I also wanted a program where I could compete as an athlete. I also didn’t want it to be such a big school where I would get lost. Coming from a private school [The Agnes Irwin School in the greater Philadelphia area], I was used to smaller classrooms. There were other schools recruiting me for basketball, but when I went to Lafayette on my official visit, I just had a good feeling about it. 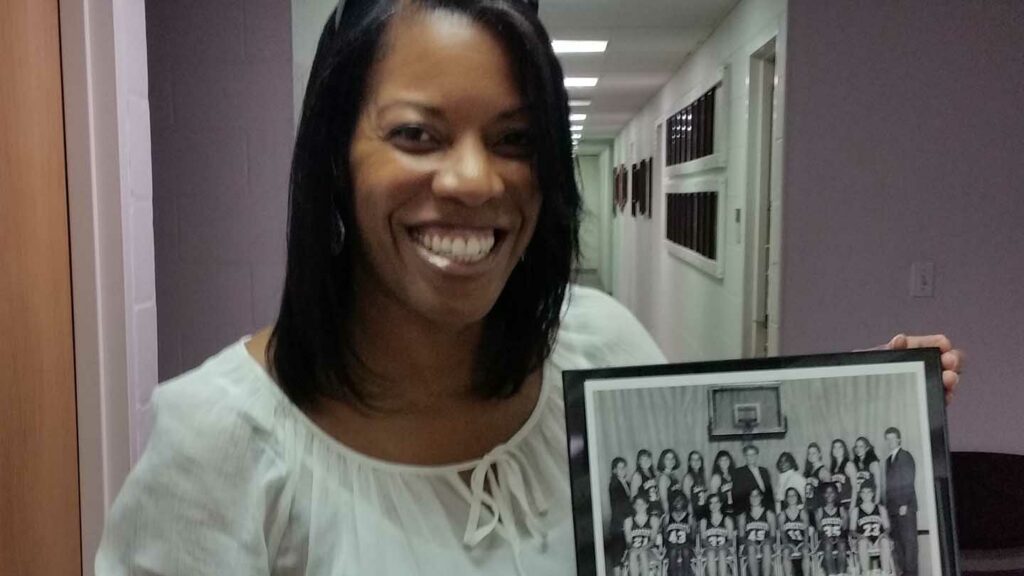 “Lafayette was and is the foundation for me to move forward as a young adult,” says Gray, here, holding her basketball team photo. “It was a rigorous work atmosphere, but you had all the support you needed to be successful with the work that was given to you.”

“We met Coach [Pat] Fisher, who was basketball coach at the time, and she came out to see me play. Everyone I met was great, the teammates were great, and it seemed like a good fit for me and my personality. Lafayette checked all the boxes for me. It felt like a home away from home.”

Gray, who had a love for the sciences and initially thought she wanted to practice medicine, pursued and obtained a Bachelor of Arts in biology. However, the more she studied psychology as an undergraduate, the more she realized how much she enjoyed learning about not only science, but people as well. Unsure of which direction she wanted to take with her career, Gray decided to move to Atlanta postgraduation and work full time at a residential treatment center facility for teens battling substance abuse and behavior disorders.

“That exposed me to a side of social work I had not experienced before,” she says. “My mother was a social worker for almost 40 years, so I knew what social work was. My exposure was primarily to the child welfare part of social work: child protective services, foster care, community outreach. But I really enjoyed being exposed to social work in a more clinical setting. You’ve got to follow your heart, and you have to follow what interests you the most,” she says. “It may not be clear at times, but I believe if you follow what’s in your heart, the clarity will come.”

And so it did for Gray. She went on to obtain both a master’s and doctoral degree in social work from the University of Georgia in 2003 and 2009, respectively. Today, as the chair and program director of the Bachelor of Social Work Department at Johnson C. Smith University in Charlotte, N.C., Gray uses her passion and education to prepare the next generation of social workers to serve the most vulnerable populations of our society.

“I really want to prepare our graduates to not just navigate this diverse world, but to do so effectively and efficiently, acknowledge their own implicit biases, and be able to work through them so they can help people no matter what their biases are,” she says. “People are people. We’re human first, and we should look out for one another. Some people don’t ever get heard, but they have needs and concerns that are just as valid as anyone else’s. So, as social workers, we need to work to make sure their needs and concerns are heard just as much as others’. I think it’s necessary, particularly in these days and times.”

Gray’s revered career began well before her arrival at Johnson C. Smith University. From 2009 to 2015, she served as assistant professor of social work and undergraduate program director for the Department of Social Work at Winthrop University in Rock Hill, S.C. Gray was named a Woman of Achievement at Winthrop’s Office of Multicultural Life celebration, and participated in a national conference call with then-First Lady Michelle Obama and Joshua DuBois, former executive director of the White House office of faith-based neighborhood partnerships, to discuss the Joining Forces military initiative. She also was a member of many committees that positively impacted faculty and students.

Gray reunites with women’s basketball teammates. Being a student athlete “taught me how powerful relationships can be. To be out there with a group of 10 to 12 individuals, working together for a common goal: to win games, tournaments, championships. There’s power in that.”

Nowadays, professionally speaking, Gray is still a wearer of many hats. As a professor, she places a keen focus on diversity, justice, social welfare, and the link between the social environment and human behavior. As a researcher, she centers her work on offering disaster relief, equipping those in need with the proper tools to free themselves from poverty, and bringing resources to youth to help them navigate through various life experiences. As a part-time medical social worker at a major hospital in the Charlotte area, she provides patient care services in areas such as crisis management and family therapy, and connects patients with community resources. As a community leader, she volunteers for relief organizations HOPE Worldwide and the American Red Cross, and serves as a board member for Dedication to Community, a nonprofit organization for community advocacy.

Much of the work she does today, Gray says, was largely influenced by classroom experiences she had as a student at Lafayette.

“Lafayette was and is the foundation for me to move forward as a young adult and as a professional,” she says. “It was a rigorous work atmosphere, but you had all the support you needed to be successful with the work that was given to you. It taught me confidence in myself, it taught me how to overcome challenges, and it taught me the power of advocacy. That is the kind of experience I try to foster for my students at Johnson C. Smith University in any way I can. Just being the type of professor where my office doors are always open for my students, and they can come talk to me about anything. Knowing I’m not just there to assign them work and teach them material, but to also be a sounding board, because that’s what I had there. A lot of what I want to be as a professor, I learned from my professors at Lafayette.”

One such professor was Charles Holliday, emeritus professor of biology, with whom Gray conducted extensive research on the cicada killer wasp during her studies—and whom Gray credits for first sparking her interest in teaching.

“There was something about the way he taught his marine biology course that planted the seed for my wanting to be a professor later in life,” she says. “He wasn’t my adviser, but I remember many talks with him about his research and his life. He was a wonderful professor, and those research projects really exposed me to high-level research. As an undergraduate, that was a great experience for me.”

It wasn’t just her academic experiences, however, that helped shape the professional she is today. The lessons she learned on the basketball court—playing for Fisher, the winningest coach in the history of the Lafayette women’s basketball program—also helped her sharpen and develop skills she later used to achieve career success.

“Being a student-athlete is like a full-time job. With practice, workouts, study halls, watching film, and travel time, a lot goes into it, and you don’t have a lot of free time. And somehow our coach always knew if we were late to class or missed class. So, at its core, being a student-athlete at Lafayette taught me discipline, and how to organize and prioritize,” she says. “It also taught me how powerful relationships can be. To be out there with a group of 10 to 12 individuals, working together for a common goal: to win games, tournaments, championships. There’s power in that.”

To this day, Gray is especially grateful for the financial aid she received while attending Lafayette—without which, she says, she would not have been able to attend or take advantage of the opportunities she was afforded.

“It made a world of difference,” she says. “I wouldn’t have been there without the financial aid I received. I would have had to stay local or gone to community college or something along those lines—especially if I wasn’t a student-athlete. So, for me, it was a great opportunity to open the door to Lafayette. It allowed me to eventually go to grad school with almost no student debt by the time I finished, and I was in a position to pay my own way through grad school. It’s super important, particularly for those populations that are underrepresented.”

Despite now being based several hundred miles away in North Carolina, Gray makes it a point to stay in touch with her Lafayette roots. In addition to remaining very close friends with her former basketball teammates, she connects with fellow alumni through Lafayette’s McDonogh Network as well as the Association of Black Collegians network. 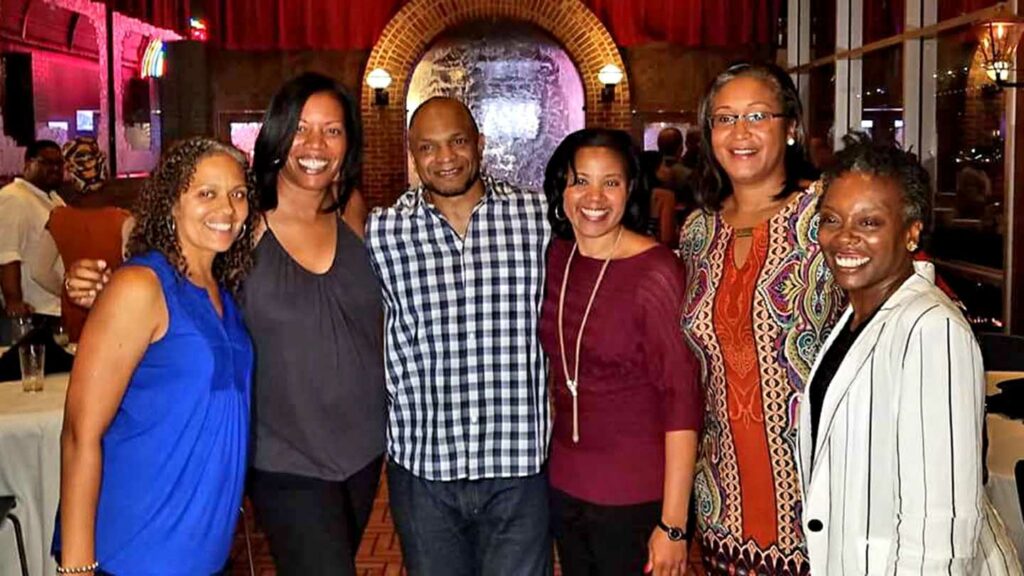 Gray remains close with fellow members of the Association of Black Collegians. “It’s important for me personally to stay connected to Lafayette because it’s such an important part of who I’ve become as a person and as a professional. It all started there.”

“It’s important for me personally to stay connected to Lafayette because it’s such an important part of who I’ve become as a person and as a professional. It all started there,” she says. “Who knew I would end up here, teaching undergraduates in Charlotte? But here I am, and a significant reason for that is Lafayette—and I will always appreciate it and love it as such.”

If there is one message Gray wants to pass on to current Lafayette students, it is to be unafraid to follow their hearts in whatever direction they are called.

“Lafayette has a lot of opportunities. As much as you can, take advantage of them,” she says. “Don’t be afraid to challenge yourself, to get out of your comfort zone, or have discourse with people who, on the surface, appear to be different from you physically, spiritually, and politically. We need to have those hard conversations with those who have differing views so we can understand them. Lafayette is a great place to understand what your voice is going to be, and figure out what kind of impact you want to have on this world. I want that for all students, but particularly for students of color at Lafayette and the McDonogh Network. To paraphrase Dr. Martin Luther King Jr., ‘Think intensively, think critically, and combine that intelligence with character.’ Lafayette is a great place to practice those principles.”