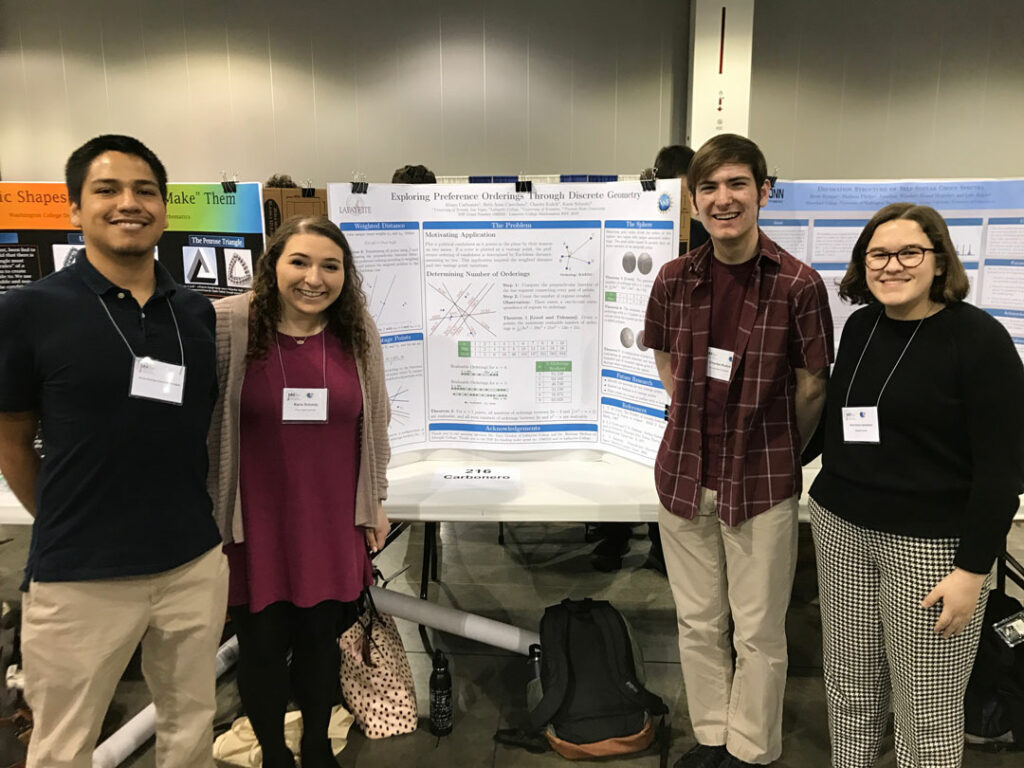 Beth Anne Castellano ’22 (far right) reunited with her REU peers at the Joint Math Meeting in Denver where they presented research conducted on Lafayette’s campus over the summer.

The group’s presentation involved exploring preference orderings through discrete geometry and expanding on a known theorem proven in the 1970s. Castellano’s participation last summer in the intensive, eight-week Research Experience for Undergraduates (REU) program—where, through close mentorship from faculty advisers, small student research groups investigate open problems in mathematics—began the journey that eventually would lead to the conference.

“There were 10 of us working on three different projects at REU, and it’s funded by the National Science Foundation. The conference was the culmination of all of our summer work, which was nice because the 10 of us who did the program bonded and got really close,” Castellano explains. “Denver was our chance to see each other again and reconnect.”

Tanmay Khale ’21, who conducted his research at Renyi Institute in Budapest as part of the Budapest Semesters in Mathematics summer program and also presented at the conference, discussed analytic number theory and how it is concerned with estimates for number-theoretic quantities.

Because the conference includes several thousand talks, panels, mini courses and poster sessions, students have the opportunity to be exposed to nearly limitless research presented by their peers—but they also must stay on task for their own presentations. Castellano’s group presentation took place on the final day of the conference, giving her time to experience a variety of talks about theoretical math beforehand. Students also took part in team competitions, including a scavenger hunt that combined math problems, themes, and social media. 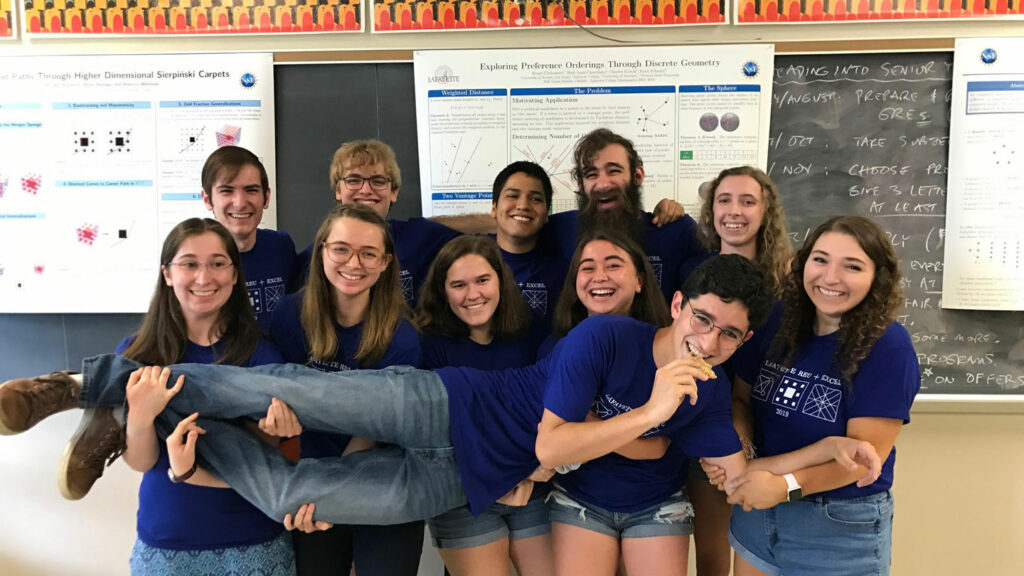 Other takeaways from the event include:

On presenting in front of math peers: “It was a small room of maybe 20 to 30 people, but that was nice because there are so many talks going on at the same time, and it really is a huge program,” says Castellano. “We had people attend our program who are affiliated with Lafayette, but a lot of people came to our talk whom we didn’t know at all but who had seen our abstract on the program and were interested in it. They asked a lot of great questions, and it got us thinking about potential extensions on the project.”

On evolving preparation: “Toward the end of the summer program when I concluded my research, I had to give a presentation to the other students on my work. As a result, I already had a PowerPoint presentation prepared,” recalls Khale. “My paper for the conference had evolved since my presentation, and moreover, the presentation was rough around the edges and needed work. I spent six or seven hours the day before my presentation updating and polishing my slides.”

On collaborating with faculty: “Getting insights from them about how these conferences work was really valuable. Being a student in math class is very different from being a practicing mathematician, and there are some etiquettes and rules in the math community that no one is really going to tell you—things you get to hear from them,” Castellano points out. “They’ve been really supportive, and there’s a nice feeling of community among all of us students and our mentors.”

On the math community: “The conference showed me what a nice sense of community all of these professional mathematicians have with each other. I was surprised to see how many people who attended knew each other and also knew my professors. It speaks to how close everyone is in the field. People are in different departments all across the country, but they still keep in touch after they finish school. I know that I’m definitely going to keep in touch with the group who went through the REU program and other people I met at this conference,” says Castellano.

“The conference was a lot of fun, most of all because I got an excuse to meet and hang out with a lot of people in the math world I had met at other programs,” agrees Khale. “I hadn’t seen some of them in a long time, and I would absolutely go again if I could.”