Here at Lafayette, John Clark, data visualization and GIS (geographic information systems) librarian, continues the time-honored tradition. But instead of crude surveying instruments, he has at his fingertips vast sources of data to help bring clarity to the modern world and, conversely, provide detail to old terrestrial maps. His expertise helps faculty and students illustrate their research and published works with maps, charts, and diagrams.

“GIS is essentially the way people do maps these days,” says Clark, who creates maps by layering digital geospatial data—municipal and political boundaries, roads, various geographical features—obtained through satellite imagery and clearinghouses of spatial data from large land grant universities such as Penn State as well as government resources. 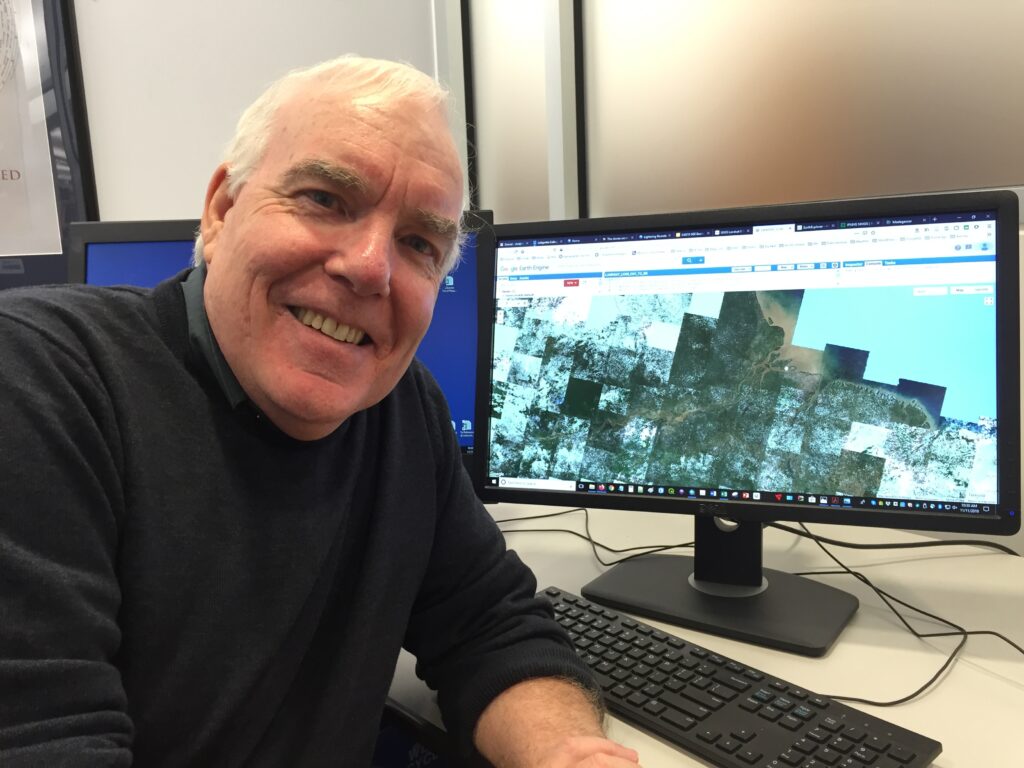 In his hands, maps become storyboards for the human experience. Clark can help illustrate the shifting boundaries of ancient empires, track the outbreak and spread of a virus, or, if asked, even help a UPS driver find the best route to deliver a parcel. It’s all about manipulating big data to create maps that correspond with specific geographic spaces.

In one of his most recent projects, Clark designed and composed six maps of early 20th-century Taiwan for history Prof. Paul Barclay’s book Outcasts of Empire. Japan’s Rule on Taiwan’s “Savage Border,” 1874-1945, published by University of California Press.

“We worked together over the course of a month or so to create the maps, all of them of Taiwan,” says Barclay, who heads the history department.

“Subsequently, the Taiwan National University translated his maps into Chinese, while utilizing John’s actual maps,” he adds. “John used a variety of instruments and techniques to produce these maps, which were esteemed highly enough by Taiwanese editors and publishers to make their way into large print runs in Taiwan itself.”

Clark was also instrumental in building the maps at purefood.lafayette.edu, the digital map companion to Pure Adulteration: Cheating on Nature in the Age of Manufactured Food (University of Chicago Press, 2019) by Benjamin Cohen, associate professor of engineering studies.

“I worked on that page for five years, with three student research assistants, a handful of digital humanities personnel, and John,” Cohen says. “This was an ambitious project. We did not produce it from a template, but created each feature from the ground up. It includes legislative maps, commodity production maps, and maps showing the global flow of three prominent new commodities.”

Clark, who teaches GIS workshops at Lafayette, developed an interest in mapmaking as a nontraditional student finishing his undergraduate degree at University of Maine in 2002. His adviser included him in a project funded by National Endowment for the Humanities to create what would become the Historical Atlas of Maine.

“I was a history major, and my adviser told me that they were teaching about computers and maps in the Engineering College; I can quote him roughly, ‘They call it GPS or GIS, or something like that,’” Clark recalls. “So I began creating maps with GIS software based on historical maps and other archival material.”

His contributions to the Maine atlas included five plates covering topics such as the spread of electrification across the state c.1880 to 1960, railroads, and suburbanization.

“I made quite a few maps for the final publication,” he says.

Clark’s mapmaking universe expanded last semester when he was invited to Google’s conference center in Sunnyvale, Calif., for the Geo for Good summit, which hosted scientists, academics, and other users of Google Earth technologies. This included Google Earth Engine, a web-based application for analyzing satellite imagery without needing fancy desktop software.

“You can’t imagine the data,” he says. “Google, in collaboration with U.S. and European space agencies, can serve satellite imagery of the entire globe in your browser, dating from 1972 to the present: 29 petabytes and growing.”

“With this Google app, you just open a browser, type in some code, and you can analyze changing landscapes anywhere in the world over the past five decades,” Clark says.

It’s unclear how Google plans to market Earth Engine Explorer, but Clark predicts it will end up in classrooms before too long.

It’ll likely be another tool for Clark, who loves sleuthing his way through troves of big data to help the Lafayette campus find the X that marks the spot.

“There’s a huge amount of GIS data out there,” he says. “And I know where to find it.”

Interested in learning more about Clark and his mapmaking skills? He’s located at 120 Skillman Library, clarkjh@lafayette.edu. “I love talking about maps and geography features—all inquiries welcome,” he says.