For most of us, leap year means an extra day in the normally short month of February to sync the calendar year with the solar year, a delay in the lurch toward spring.

But for classicists like Jason Simms, it’s an opportunity every four years to peel back the millennia to ancient Rome, where people couldn’t be bothered about marking time. In fact, they almost seemed to resent it. By the time the late Republican era rolled around, the calendar was so messed up that it inspired Caesar to reset the Roman clock, establishing the first leap year or, more accurately, leap day, tradition.

“The reality is that for the first 700 or so years of Roman history, if we start from Rome’s mythical founding in 753 BCE, Romans just really didn’t seem to care all that much about time,” says Simms, an instructor for foreign languages and literatures and manager of research and high-performance computing in Information Technology Services. 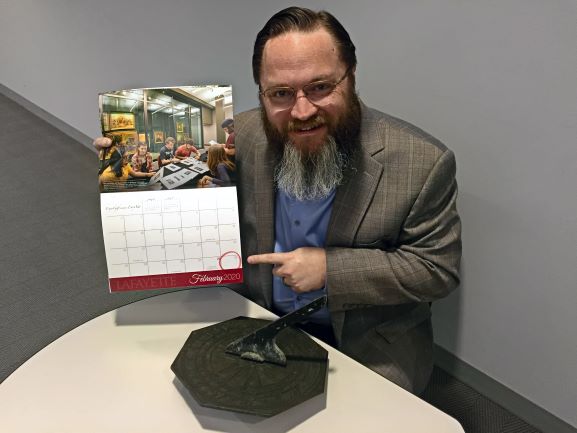 When in Rome, ditch the sundial

This reflects, of course, that Romans reckoned time much as rural residents would, even in an urban setting. For a typical up-and-coming patrician, the workday ended at noon; time to head to a public bath for some R&R.

Statesman-writer Pliny the Elder even observed that “for so long a time the day was undistinguished for the Roman people.” Efforts to define fixed intervals of time were often viewed negatively; one fragment from Plautus, a Roman playwright, reads:

“May the gods destroy that man who first discovered hours and who first set up a sundial here; who cut up my day piecemeal, wretched me. For when I was a boy, my only sundial was my stomach, by far the best and truest of all clocks. When it advised you, you ate, unless there was no food; now even when there is food it isn’t eaten unless the sun allows it. Indeed, now the town is so filled with sundials that the majority of its people crawl about all shriveled up with hunger.”

Romans just didn’t care all that much about months being out of alignment every now and again, Simms says.

“We tend to think of the week as one of the smallest repeated units of time within the year,” he says. “Romans didn’t function within the week as we do today and instead marked time more or less by 16-day market cycles.”

It wasn’t until Constantine that Sunday became a mandated day of rest, meaning, Simms notes, that for about 1,000 years of Roman history, the only “days off” were festivals, either religious ones or those mandated by the emperor or other leaders.

Up until Caesar’s time, a year was 355 days, and the Romans knew that this resulted in a drift with the seasons.

“Every so often, they would add a month to correct the calendar, but it wasn’t sufficiently accurate, such that by Caesar’s day in the late Republic, the calendar was way off,” Simms says. “Caesar consulted with astronomers, indeed, but not Roman astronomers. The best in the known world at that time were Greek, a culture with a much stronger history in astronomical sciences than Rome. Romans, as a whole, tended to embrace more practical scientific pursuits, such as engineering.”

Pliny records that Caesar consulted Sosigenes of Alexandria, a Greek astronomer from what is now Egypt, and a few others and decided to add one day every four years.

“Originally, it would have fallen on what is our Feb. 24, but, due to how they numbered their days, they would just repeat a day rather than add a day, almost like we do when we ‘fall behind’ in time and repeat an hour.”

Caesar chose Feb. 24 because the end of the Roman year was marked by Terminalia, which was Feb. 23. Because of how Romans named their days, however, there already was a Feb. 24, so Caesar just mandated, essentially, to have that day twice.

“For us, it would be like having January 1 twice, rather than adding February 29,” Simms says. “Caesar didn’t add a new day, he just repeated an existing one.”

In addition to creating the leap day, Caesar made 46 BCE 445 days long to correct the extreme drift that had happened even though a month had been occasionally added to correct for the 355-day year.

“This year was known as the ‘last year of confusion,’ ” Simms says. “He also added the 10 days across various months to get us to 365 days, plus the leap day, every four years.”

The old calendar, even with its problems, would have been mostly accurate.

“However, the office of the pontifex (a chief priest) was a year, and amusingly, the pontifex could literally extend the year if he or his buddies were in office, or not extend a year for his opponents,” he adds. “This was a prime cause of drift, even accounting for regular inserted months.”

It all added up to a more accurate system, but it wasn’t perfect.

“Pope Gregory corrected this in the 16th century,” Simms says. “By this time it was 10 days off again, giving us the Gregorian calendar we more or less have today.”