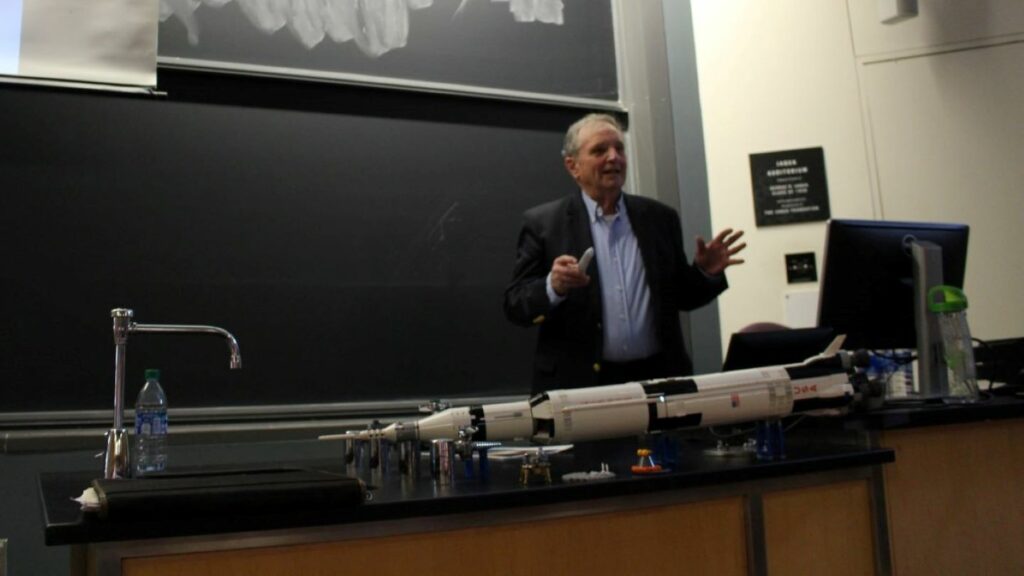 Emma Hamilton ’23 (math and economics) remembers her excitement when her grandfather came to her preschool to talk about his career as NASA engineer during the Apollo program.

On March 5, she experienced that excitement again when he came to Lafayette to give a noontime lecture about how NASA accomplished its goal to land the first human on the moon and how that mission contributed to society in multiple ways.

Students, faculty, and staff filled Jaqua Auditorium in Hugel Science Center to hear Jeffrey Hamilton recall thrills and unknowns of the space program and manned moon missions that began more than a half century ago. 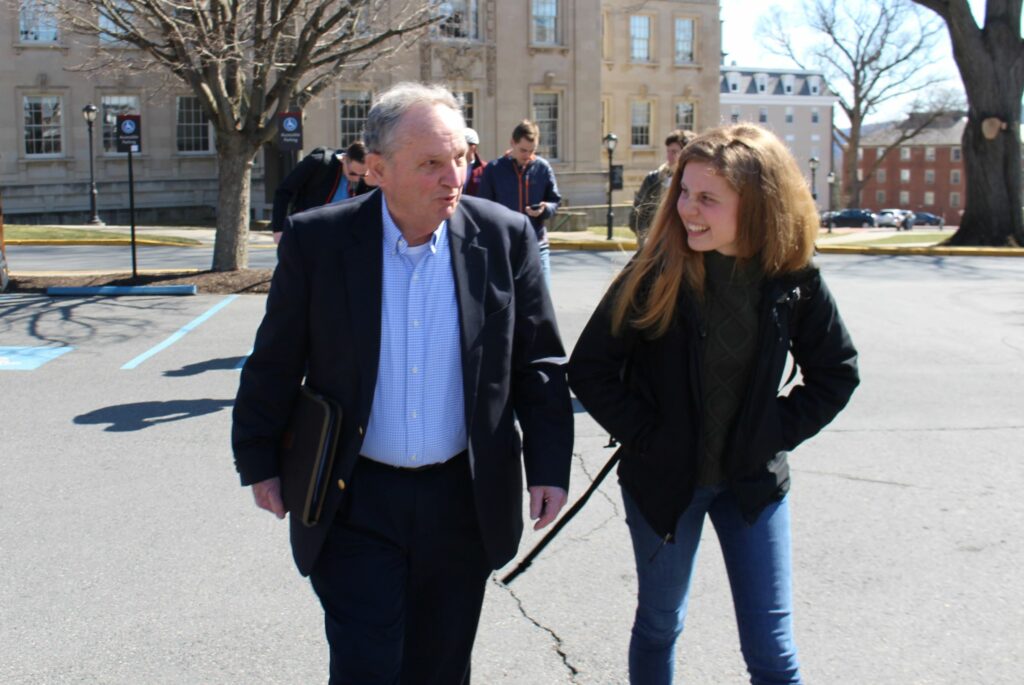 A graduate of University of Notre Dame where he received degrees in English and mechanical engineering, Hamilton started as a propulsion engineer at NASA’s George C. Marshall Space Flight Center in Huntsville, Ala., and later transferred to the Manned Space Center in Houston, Texas, and ultimately NASA headquarters in Washington D.C., as director of technology utilization.

His first boss was Wernher von Braun, the dean of modern rocketry, first in Germany and after World War II in the United States where he led the Saturn V rocket program that took Apollo 11 to the moon. Hamilton noted that all of NASA’s liquid-fueled rockets, from Mercury-Redstone to Saturn V, followed the German engineer’s designs.

“He was the most brilliant man I ever met,” Hamilton said.

A witness to history working with von Braun, Hamilton helped engineer propulsion systems of the early Apollo missions and worked at mission control for Apollo 11 through 13, performing engine testing on the Saturn V rocket.

“I saw the Apollo 7 launch,” Hamilton said, recalling the ascent of the first crewed spaceflight of the Apollo program in 1968. “It was phenomenal watching what was essentially a 36-story building lift off. You can’t believe the experience.”

Political and economic forces propelled the American space program, Hamilton said, noting how the Soviet Union’s success in placing the first satellites in orbit put the United States into “a psychological depression.”

But when President Kennedy’s moon challenge in 1960 moved Congress to approve major spending on the space program, the nation snapped out its funk in a bold style.

“A lot of us decided that anything they could do, we can do much better,” Hamilton said. “We wanted to show the world what we could do.”

Weighing 6.2 million pounds fully loaded and taller than the Statue of Liberty, Saturn V projected American ingenuity and wowed the world, he said. It was NASA’s job to assemble an amalgamation of parts and systems from multiple American aviation companies.

“We went through the excruciating detail of every facet of the launches,” Hamilton recalled. “We went through dry runs of everything, to identify what we didn’t know,” he said. “With Apollo 11, we didn’t know if we were going to sink into the surface of the moon, bounce off the surface of the moon, or crash. Nobody could positively say that everything would work out. There were many unknowns.”

Technology and science of Apollo missions

Hamilton said scientists learned that the moon, 4 billion years old, was a hot sphere at one point, and its core might still be hot; the moon is similar in chemical composition to Earth.

Hamilton also noted that NASA pioneered renewable energy. Upon returning to NASA headquarters in 1976, he worked for former astronaut Jack Schmitt in management of renewable energy legislation that Congress had given to NASA.

Asked by an audience member about his hopes for the space program, Hamilton said he’d like to see space aviation develop commercially and the pursuit of economic development in space, particularly mining, rather than just going to Mars for the sake of it.

Hamilton’s talk was sponsored by the student chapter of American Society of Mechanical Engineers. Zev Granowitz ’21 (mechanical engineering), chapter president, introduced Hamilton and spent time with him before and after his visit to Lafayette, discussing the value of a well-rounded education. 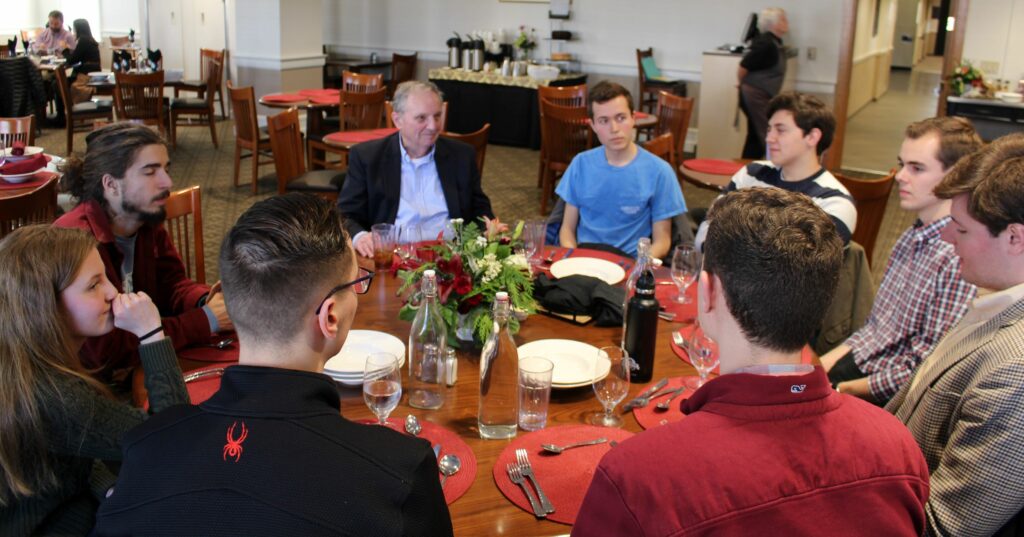 Jeffrey Hamilton joins members of the student chapter of American Society of Mechanical Engineers for a pre-lecture lunch.

“Mr. Hamilton was telling me about how his English degree allowed him to quickly gain a more prominent role at NASA, as his superiors wanted his help when writing reports,” Granowitz said. “One of his superiors was Wernher von Braun, and Mr. Hamilton was able to meet regularly with him because of his writing abilities. Getting to know Wernher von Braun allowed Mr. Hamilton to be reassigned to a more prominent role in the development of the Saturn V rocket.”

“To me, it spoke to the importance of the liberal arts education which Lafayette offers,” he said.

For Emma Hamilton, her grandfather’s talk reinforced how much she values his presence in her life.

“He has inspired me my whole life,” she said. “He’s always eager to talk about science or policy or just to have a great conversation.”