She has been awarded $40,000 to fund up to 12 consecutive months devoted to full-time research and writing for her book project titled Dostoevsky’s Disciples: Religion and National Ideology in Russian Culture, 1881-1913. Ceballos is one of approximately 28 awardees in the U.S. at the assistant professor level. 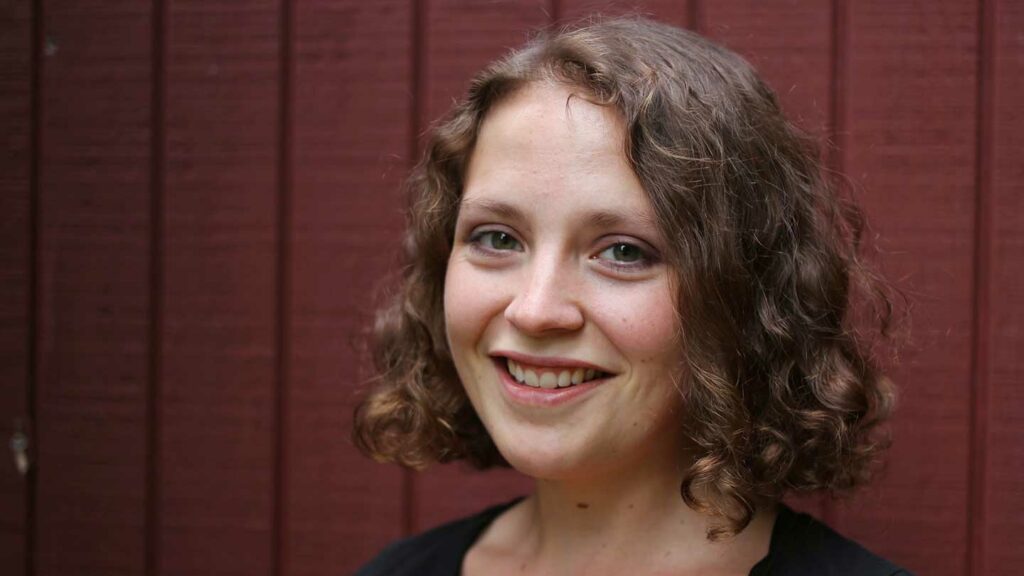 “I’m a first-generation student; I’ve been working hard my whole life trying to follow my interests and make a career out of it,” says Prof. Lindsay Ceballos. “I’m super thrilled and very grateful for the opportunity.”

In her book manuscript, which she has been working on for the last four years, Ceballos explores the novels and cultural legacy of Fyodor Dostoevsky and their relationship to early Russian modernism and literature, theater, and religious culture during the late 19th century.

“It’s not so much about Dostoyevsky but about reading Dostoyevsky at a particular historical moment,” Ceballos says. “I’m trying to show that we need to understand how invested some writers, critics, and dramatists were in a particular image of Dostoevsky. I look at the investment that some religious thinkers had in reading Dostoyevsky’s work as Christian humanism or moral philosophy. I also look at the role of journalism in creating a cultural image of Dostoevsky after his death—he died in 1881. And then I look at the very first attempts to stage his novels in the theater, trying to understand how elites were reading him and how the public engaged with him in a new way when it became popular to see his novels on stage.”

Ceballos, who joined Lafayette in 2016, first became fascinated with Dostoevsky’s global influence as an undergraduate, when she first read about how the French-Jewish philosopher Emmanuel Lévinas would sum up his philosophy by quoting Dostoevsky—who was famously anti-Semitic.

“I’ve gone on a journey with Dostoevsky. [In my book project,] I’m very critical of his writing at a time when I feel people maybe are not critical enough of writers who have said racist things, sexist things,” Ceballos says. “We can’t erase that part of people’s work. It has to be a part of a conversation about why writers are great. For many of his most passionate first readers who were religious thinkers themselves, Dostoevsky’s religion was adapted, depoliticized, and detached from his political agenda. I want to show exactly how conservative Dostoevsky’s political thought was, and I want to point out all the moments where his moral philosophy breaks down.”

The objective of Ceballos’ writing is not to tear down Dostoevsky’s legacy, she emphasizes, but to add to an ongoing conversation among Dostoevsky scholars.

“A writer is not just something that’s given to us; it’s something we create, and there’s a politics to that that really matters,” she says. “Sometimes there’s a rosy picture of Dostoevsky as a Christian thinker, and I just want to complicate that with my research.”

She is teaching Dostoevsky in a Global Context, for which she received an Information Literacy Grant to develop earlier this year. There, in collaboration with Terese Heidenwolf, director of research and instructional services, Ceballos guides students as they dive into Dostoevsky’s work—especially his final novel, The Brothers Karamazov—as well as scholarly and critical arguments about his writing from across the globe. Students then are asked to examine the continuing appeal of Dostoevsky’s religious beliefs and universal moral claims. Other course topics Ceballos teaches include 19th-century Russian literature and Russian and Soviet cinema, among others.

Ceballos hopes to use her ACLS Fellowship to take a year-long sabbatical and become affiliated with University of Helsinki in Finland, where she plans to continue her research and writing. Her goal is to finish her manuscript by July 2021.

“Finland is a great place because it’s quite close to Russia, so a lot of Russian scholars come through their institutes,” Ceballos says. “There’s a very vibrant community in Finland for working on Russia at various time periods, across the disciplines. There is also a Slavonic library there that’s important for my work, and they have materials that are even hard to get in Russia.”

Ceballos was initially nervous about applying for the ACLS Fellowship, but decided to take the plunge thanks to the encouragement of her colleagues and friends—whose advice truly paid off.

“I’m really surprised I got this award, honestly,” she says. “I feel completely lucky. It’s an incredible thing for my career. I’m a first-generation student; I’ve been working hard my whole life trying to follow my interests and make a career out of it. I’m super thrilled and very grateful for the opportunity.”