Ryan Van Horn ’04, associate professor of chemical and biomolecular engineering, has been awarded a National Science Foundation (NSF) grant for his research project titled RUI: Metastability of Crystals in Double Crystalline PEO-b-PCL Films and Their Role in Transport Properties.

His grant, which is in the amount of $260,000 and will fund his project for the next three years, will begin once his current NSF award ends this year.

Working alongside three students per summer and one student per academic year, Van Horn will be studying the structure and macroscopic properties of two types of FDA-approved plastics—polycaprolactone and polyethylene oxide—and the broader implications for their use in the biomedical field in items such as pill capsules. Polycaprolactone, which is used for sutures, and polyethylene oxide, which is used in protein-repellent coatings,  are already readily available in other biomedical applications and devices.

“The plastic film we study has two chemical components. They separate in the film, and then each of those chemical components can crystallize and form sheet-like structures that have different properties from the other parts of the film that aren’t in the sheets,” Van Horn says. “We study how the sheets form, how many sheets there are, how big they are, and how that relates to how water gets absorbed into the film to help it break apart, and how drugs make their way out of the film with those sheets in the way. We try to tailor how the sheets form and how those two chemical components separate out so that we can control how the film breaks apart over time or how a drug is released over time.” 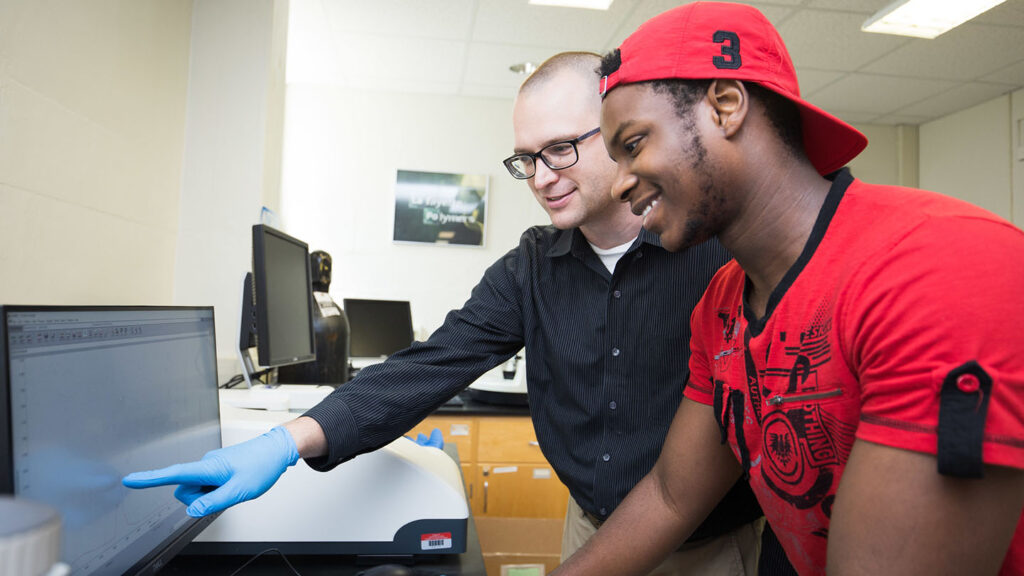 Alex Ashley ’22 conducted research as an EXCEL Scholar on copolymers under the guidance of Van Horn.

The main focus of his project is to analyze how the sheets change over time, and how those changes can affect the way the plastic film breaks down and releases drugs in the human digestive system. With his research, Van Horn aims to make these accessible plastics more diverse in their applications by manipulating their structures and changing their properties in ways that haven’t been seen before.

But the greatest impact of his studies, Van Horn hopes, will be on his students.

“I’m really excited because I do this for the students,” Van Horn says. “Part of the reason why I think I’m successful with my grant proposals is that they help the students gain valuable experience, prepare for graduate school or industrial work, learn what lab work is about, and learn about plastics and the techniques used in plastics that are very relevant to current academic and industrial research techniques that they might use in the future.”

He plans to use his grant money to fund student stipends, support students’ travel to national conferences where they present their work, and buy lab equipment that students and various faculty members can use for their research. Part of the grant also will help pay for student visits to larger facilities where they can use lab equipment not yet available at Lafayette. Additionally, the award will allow Van Horn to invite a local high school junior or senior to participate in the project.

Van Horn, who received a doctoral degree in polymer science from University of Akron and a B.S. in chemical engineering from Lafayette before he joined the College faculty two years ago, likes to take a hands-off approach when leading his students through his research projects—a method he picked up from his own professors when he attended Lafayette.

“The students typically do everything,” he says. “They all get trained by me, and then I let them do what they do. The stuff we do is safe, and the equipment we use is relatively simple to use. The harder part is analyzing the data that we get, and so I work closely with them to talk about what the data means and where we go from here. My professors were heavily involved in my ability to learn and be successful and helped push me to problem-solve and do things on my own, which is really important for graduate school and designing your own research agenda. That really worked well for me personally. Those personal relationships showed me that I wanted to have the same sort of interaction with students: being able to take students under your wing and help them figure out where they want to go in life, how to prepare for doing independent research projects, and how to solve problems.”

When reflecting on his achievement in receiving the NSF grant, Van Horn is most excited about the fact his students are being acknowledged for the contributions they make, and that more students will be able to follow in their footsteps.

“It makes me proud that people are recognizing that these students are valuable, that the research is valuable, that this is worth funding, that what they’ve done in the past is noteworthy, and that they deserve the opportunity to keep working on it,” he says.