Q&A: teacher Shehtaz Huq '14 on classroom challenges, the impact of her award-winning podcast, and more Twitter

Meet Shehtaz Huq ’14. Her life has taken her from Bangladesh to Texas to Pennsylvania to the Bronx. Today, she teaches sixth graders about literature and about the world around them—world knowledge she picked up at Lafayette. She’s also taught middle school girls—winners of the NPR Podcast Challenge—to use their voices for the greater good. Here, Huq reveals the challenges in adapting to being in front of a classroom, the impact of she and her students’ award-winning podcast, and what we might learn from using technology as a teaching tool. 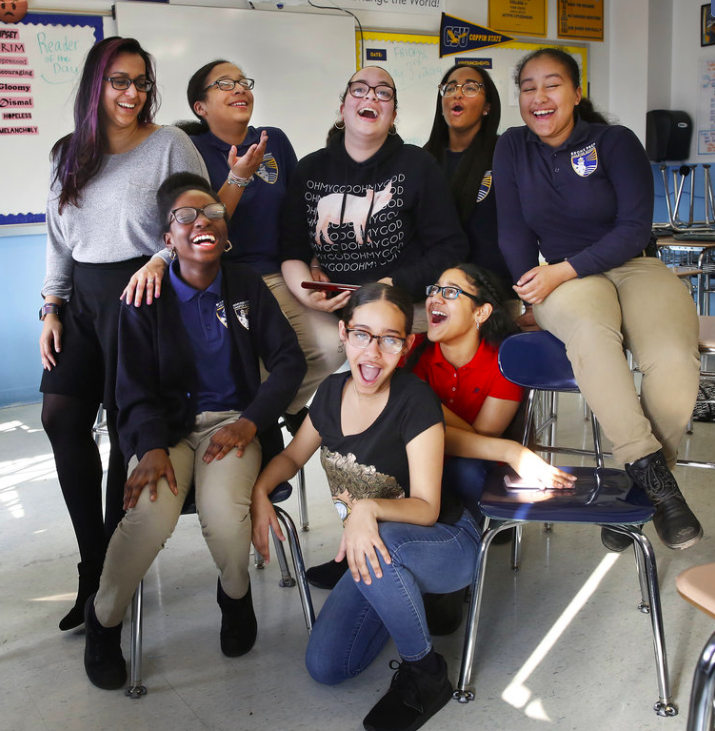 At Lafayette, you double majored in English and film and media studies. Then you ended up in front of a classroom yourself. How did you decide that teaching was the best career move for you, and why that specific age group?

When I was a junior, senior Jiselle Peralta ‘13 had done a summer teaching program through Uncommon Schools, which is a charter network in New York. She was the summer program ambassador and was recruiting rising seniors for the summer teaching program. I thought it was interesting and wanted to try it out, but I didn’t think I was going to get in. I had no experience working with kids.

I applied over the holiday break and after I found out that I was accepted, I was placed in Rochester and spent seven weeks of the summer before my senior year in a co-teaching classroom with sixth grade English students. I developed a bond with my mentor, Lisa, who taught special education.

Special education doesn’t exist in Bangladesh, so for me, it was a whole new system of teaching. After seven weeks, the school offered me a contract. I still had to return to Lafayette to finish my degree, but I returned for my senior year with a job offer.

What was that first year in a classroom like for you?

I was in an eighth-grade classroom, and my co-teacher was pregnant. When she went on maternity leave, I was put in charge.

At first, I felt so unprepared. They say that the first year is the hardest—that’s your trial by fire, and if you can make it through that, you know you’ll be OK. For me, those first two years were a struggle because it was a charter school, and the demands were longer hours and a longer school year. A lot of students also had very specific emotional and academic needs. I was also working on my master’s degree at the same time.

After two years in Rochester, I moved down to the Bronx and started teaching sixth grade English at Bronx Prep Middle School.

And then you heard about the NPR Student Podcast Challenge (a contest for teachers with students between fifth and twelfth grades, where the winners have their work appear on NPR).

I found out about the Podcast Challenge because NPR featured me in an article about Harry Potter’s 20th anniversary and how teachers use Harry Potter in the classroom. Because I had been in touch with NPR when the challenge was in the works, I think I found out about it before some other people did.

I had never made a podcast or even listened to one, but I went down to the main office of Bronx Prep, and I looked at the honor roll and picked the top six girls. There were already many opportunities at the school for boys, but not many for girls, so I wanted to do an all-female team.

None of them knew what a podcast was, either, so we had a lot of learning to do together. We spent a lot of time listening to podcasts and trying to deconstruct them, brainstorming, and talking about issues that we cared about.

You were able to get a group of eighth graders to openly discuss a subject—menstrual periods—that even adults can be uncomfortable discussing.

A lot of teachers and other students were uncomfortable with it. Some even said, “Well-behaved young women don’t talk about stuff like that.” That was even more reason for us to do it.

And when we submitted our podcast, we were recording in a storage closet. I was spending six hours a day trying to figure out how to edit it.

When NPR called and said they had over 25,000 entries from over 6,000 schools, and we won, I was crying. The girls were crying. It was amazing.

There’s been a cultural shift at our school because of it. The whole reason we even started this podcast is because one of those students wasn’t allowed to get a pad or to go to the bathroom. There were no menstrual products available in the bathroom—girls had to go to the main office to ask for them. They would sneak pads around in their sleeves and makeup bags, and if they got caught, they would get a demerit.

After the podcast came out, so many teachers said they never realized how bad it was. Then we had people from all over contacting us—from Kenya, Mexico, Bangladesh, Puerto Rico—emailing and calling us. We received over 30,000 pads in the past year from corporate sponsors. There are no more demerits for students who get up and go to the bathroom because they’re afraid to bleed through their pants. It changed everything.

What was the biggest lesson for you, personally, to come out of that?

I moved to America 12 years ago, and I went to high school in Texas, which was not the most accepting environment for a Muslim immigrant from Asia. I was one of few people of color in my graduating class, so I’ve always felt that sense of isolation.

When I moved to the Bronx and started teaching black and Latino kids, we discovered we all had things in common. They’ve been on food stamps. I’ve been on food stamps. Their parents are struggling. My parents struggled. They don’t speak English as a first language. Neither do I. There’s been so much of myself that I see in them. I’ve been able to be this person who shows them that there’s so much more that they could be doing and that their circumstances don’t have to limit them.

It just so happened that every girl on the podcast was multilingual and multicultural. We were women of color, in the Bronx, recording in a storage closet on an iPhone. When we won, I felt vindicated. We went from a storage closet to Congress. We went to Congress and talked about menstrual equity. That’s amazing. And this was never about winning. It was about proving that we could do it.

What is one thing that you’ve carried from your Lafayette education that has had the biggest impact on your abilities as a teacher?

Lafayette was the first school where the alumni network reached out to me about setting up an interview. At that point, I was in high school and didn’t have a car. My interviewer drove all the way from Dallas to Grapevine, Texas, and we sat in a coffee shop and talked for hours. As he talked about the “college experience,” I kept thinking that this could never happen for me.

When I applied and got in, I kept asking myself why they would take me. Coming from Bangladesh, I had so many challenges. My first two years were a struggle because I was new to the American system. By the time I graduated, I had worked seven different campus jobs. I was hustling and trying to keep my grades up. I won awards and scholarship money. I was the average Lafayette kid trying to be as involved as possible, but the game changer for me was the people. I call those people my college family.

The classes I took also opened my eyes and showed me that there’s so much about the world I live in that I didn’t know. When I’m in a classroom now, I talk about history, politics, and religion along with literature. Being at Lafayette taught me how to be a teacher.

Let’s wrap up by talking about what we’re all dealing with right now in the academic world—being at home instead of in the classroom. Have you had any thoughts about what we may learn from this that will help us in the future?

I think it’s going to force people to learn skills that we may not have thought about learning before. I’m a millennial, and I’m uncomfortable with using digital technology and using digital learning as a teaching tool. That’s only because I’ve never used it before. We’re going to be forced to adapt, but hopefully when we come out on the other side, we’ll realize that we’ve tried different strategies and that these things work.

When we come back for a new school year in the fall, maybe we’ll have realized that we can reach our kids in a different way and meet them where they are. This is a trial-and-error period, and I want to be optimistic.