If there are two things that the novel coronavirus can’t put on hold, one is a sense of community.

As members of the Marquis Players have discovered, the other is a true sense of artistry and perseverance.

When the entirely student-run nonprofit theater group realized it would be unable to present its spring musical—which also is used as an annual fundraiser for local Easton charities—members recognized that physical distance wasn’t going to impact their ability to make a difference for a community in need.

And as they say in show business … the show must go on.

From that spirit, a virtual dance party was captured. The rehearsal footage, recorded during the group’s nearly 100 hours of rehearsal for Footloose, was edited and posted on YouTube, then shared during a weeklong GoFundMe campaign that aimed to support the Easton Hunger Coalition.

The result? Over $7,600—and counting—raised, which broke last year’s record.

In fact, the fundraiser will be accepting donations through the end of day April 25. 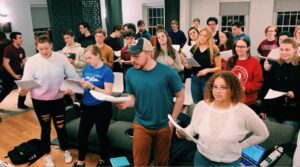 The Marquis Players rehearse together for Footloose prior to the COVID-19 campus shutdown. 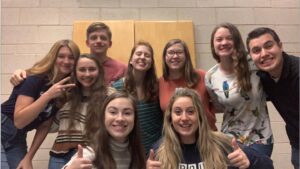 “When we found out that the musical would be completely canceled, obviously it was devastating. We all let ourselves mourn for a bit. But then the next week, our executive council met and started asking, ‘What can we do?’” recalls Casey Nevins ’20, club president. “We were worried about the organizations that we usually raise money for, and we were determined to beat the record-breaking $6,636 we raised last year.”

The group spent a week talking about the best way to do that, and then decided to utilize the power of social media to share its plan. With the club over 100 members strong, students shared their news with their network of family and friends on different days. They also reached out to Marquis Players alumni, who were more than happy to help spread the word.

“The best part was seeing all the alumni rally around the club and share and donate,” says club vice president Olivia Coughlin ’20. “It really sunk in just how deeply connected Marquis Players makes their members feel in their four years at Lafayette.”

The final rehearsal and run-through of the show also turned into a pajama rehearsal, which is what viewers will see as they watch the video.

“We wanted to have a little bit of fun, for the sake of our own memories,” says Nevins, who was expected to experience her last musical on campus along with 15 other seniors in the club. “The executive council was trying to keep everyone’s spirits up, and we’re really glad that we created and have these videos to share.”

“The fundraiser was a testimony to how strong and resilient our group is,” agrees club operations manager Simone Khalifa ’20. “We were determined to put on the production, but more so, we are dedicated to our mission and the family that is Marquis Players. This fundraiser brought us together and provided a source of light in what could otherwise have been a time of darkness.”

The club is also eager to present a check to Easton Hunger Coalition—which has been providing meals for children in Easton and Wilson school districts throughout the state shutdown—as soon as possible. The Coalition also hosts a number of food pantries throughout the city of Easton.

“We’re so excited to see their reaction and hear what they’re going to do with the money,” says Nevins. “It’s going to help so many people, which is so exciting. Every time someone donated to this fundraiser, it made me cry.”