Tracy Hagert Sutka ’82 P’17 already had her green and gold sweatshirt and other Tribe gear and was eager to start at William & Mary when a twist of fate established a lifelong relationship with maroon and white.

“Growing up in Massachusetts, my goal in high school was to get out of New England,” she says. “I was going to go to William & Mary. I was all set. That was my target school from my junior year when my guidance counselor tapped me on the shoulder and asked me to come to the office to go through college catalogs. I was a very good student, so everyone wanted me to go to an Ivy League school.”

Then, a friend of her mom’s mentioned that her daughter was a first-year student at Lafayette and was loving the experience there.

“So I visited, even though I had all of the William & Mary shirts and notebooks,” Sutka recalls. She sat in on some classes, met faculty, and attended a pub night, befriending students and pen pals.

William & Mary had to stand aside for the Marquis de Lafayette.

“I said, ‘I’m going here,’” she says. “I just fell in love with Lafayette, and I never looked back.” 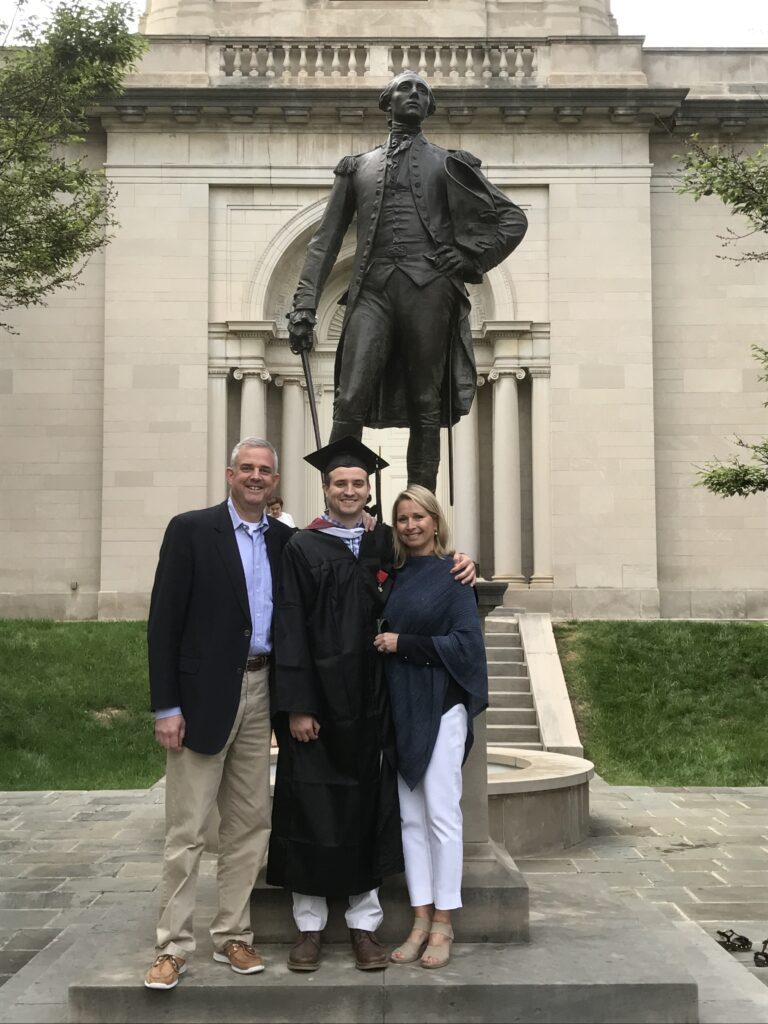 It’s that deep bond shared among students and alumni that Sutka wants to extend to an even broader community as the new president of the Lafayette College Alumni Association. She will begin her two-year term in June, succeeding Jonathan Ellis ’98.

“Plain and simple, I want to bring more alumni into the fold to help raise awareness about Lafayette as being a top-tier liberal arts school,” she says. “I would like to see if we can just increase the percentage of alumni who donate and even participate in any volunteer opportunities.”

Sutka’s Lafayette experience as an international affairs student and her subsequent support as an alumna serve as examples of how giving back makes a difference.

In 2019, she and her husband, J. Michael Sutka ’83 (economics and business), established the Rado Pribic Prize in International Affairs. Named for the program’s chair from 1989-2011, the award was created to recognize a junior or senior who has exhibited high academic achievement in the coursework and study of international affairs. In addition to the award, the couple’s Study Abroad Fund helps students who pursue learning experiences in other countries.

She still recalls how generous financial aid allowed her to spend her junior year in Paris at the Sorbonne. Sutka learned French with native speakers, which proved valuable in her Wall Street banking career analyzing financial documents for French and Swiss clients and as a French teacher for 10 years at a private school after that.

“So with really no teacher training whatsoever, other than the way I was taught at Lafayette, I checked a lot of boxes for what a liberal arts education is supposed to do,” she says. “That’s invaluable when you leave school and you don’t necessarily have one career path in front of you.”

Well aware of the importance of alumni engagement to help the College meet its goals, Sutka first got involved in fundraising about a decade ago as chair of the Marquis Society and helped back Lafayette’s strategy to increase financial aid and move toward becoming need blind to attract the best and brightest students.

“As the alumni admissions representative for 20 years, I am a very admissions-oriented person and have been involved with the Admissions Office,” she says.

As a parent of a recent grad, Christopher Sutka ’17 (government/law and international affairs), she would like to involve more parents in campus activities and engage students while they’re on campus.

“I think that there’s a lot that we can do to bring more parents into the fold, not only during the four years that their students are on campus,” she says. “We’re already trying to leverage some parents in certain geographic areas just to reach out to parents of prospective students.”

Reaching out to students while they’re on campus is also on Sutka’s to-do list.

“Even just to make them aware what the alumni have done for them and what they can do when they graduate,” she says. “There are a lot of opportunities that students would probably love to be involved in, like GatewayLink, which allows alumni to connect with students. It’s just one way to get the message across that the College isn’t done serving them.”

Sutka says she cherishes the Lafayette connection even more these days as communities deal with fallout from the COVID-19 pandemic.

“Right from the very beginning, Lafayette reached out to all their alumni right away, not like oh, hi, please send us money right away, but just reaching out to keep us informed,” she says. “I wish every alum would know the lengths that Lafayette goes to keep the community together, including helping the students who have been stranded on campus.

“It says a lot about this institution, that plans have been carefully made and thought out,” she says. “Any one of us who have graduated from Lafayette should be so proud of what the institution stands for, and that’s a message I hope to advance.”