Mike Butler, associate professor of biology, has been honored for his continued and extensive service to the American Ornithological Society (AOS). 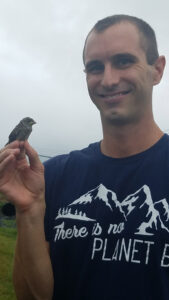 Butler received the Marion Jenkinson Service Award to recognize his “passion for mentoring and his commitment to supporting the professional development of early career scientists, which represents an investment that promotes a diverse and inclusive ornithological community.”

Butler joined AOS in 2004 while he was pursuing his master’s in raptor biology at Boise State University, and started serving on committees while working toward his Ph.D. in biology from Arizona State University. He became an active member in the society, working to resuscitate its early professionals committee, which had gone defunct. He organized recruitment events and launched an “early professionals mini-talk symposium and social,” which enabled early career scientists to showcase their research and network with peers.

“There are people doing really cool work, people who are really at the forefront of new techniques and technologies,” he says. “It became a really big and popular event that enabled early professionals to network and find mentors.”

Thanks to Butler’s leadership, the committee is now robust and thriving.

Butler continues to serve the society as chair of its membership committee.

“The recognition is really meaningful,” he says. “I care a lot about mentoring and making sure that early professionals and people who are engaged in science get the support they need.”