With a resurgent popularity in board games, Gregory Dietz ’13 and his business partner are rolling the dice with their first try at entering the global board game market.

Board games have been popular pastimes since antiquity, but in recent decades they’ve taken a subordinate place next to computer and online games. A growing and sustained desire to break away from the impersonal isolation of computer games has drawn people back to tabletop games. 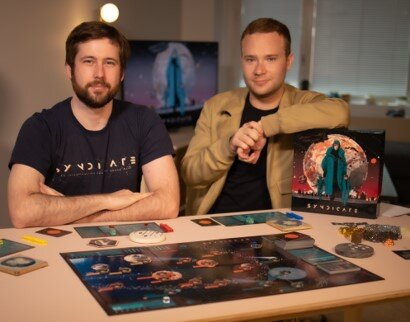 Gregory Dietz ’13 (left) and his business partner Josh Pollack enter the global board game market with Syndicate: An Interplanetary Conquest Board Game.

Dietz and his longtime friend and business partner, Josh Pollack, this month plan to embrace the return to good old-fashioned board games with the launch of Syndicate: An Interplanetary Conquest Board Game.

For two to five players, the sci-fi infused game takes place in 3015, six years after a civil war in the Arcturian star system. Following the invention of interstellar travel technology in the 22nd century, greed and human desperation have fueled a wave of corporate-led colonization of remote solar systems.

An authoritarian regime known as the “Sovereign” is starting to lose its grip on power, opening the door for criminal organizations to proliferate. Each player represents a criminal syndicate vying for control of the star system. Game duration is between 90 and 120 minutes.

Not exactly a relaxing rainy day game of Parcheesi, Syndicate is part of the 4X genre of epic strategy games that appeals to hard-core gamers itching for a highly competitive experience. Dietz and Pollack have tested their game among that loyal audience and received positive reactions.

Growing up in Scarsdale, N.Y., the two have been friends and game and science fiction enthusiasts since junior high school.

“Since childhood, we have talked about forming a company together, and these past two years we took a concept to reality,” Dietz says. “We formed PDU Games LLC to fund and launch, via Kickstarter, our first board game.”

“We’ve always been creating games and had lots of ideas about making our own,” he adds. “We feel that board games are good at bringing people together and forging relationships and friendships. With a board game, you can sit down at a table with strangers, and by the middle to end of the game you’ve already made new friends.”

“While my focus was in the sciences, the liberal arts nature of Lafayette encouraged me to explore my strong creative and artistic drive as well,” he says. “I took several art and theater classes, which were some of my favorite classes there. This combination of logic, creativity, and the arts helped me refine a well-rounded mindset, and that is key for entrepreneurship.”

The time certainly seems right to launch a new venture: Recent statistics show a rapidly expanding board game industry, with some projections forecasting a $12 billion market by 2023, Dietz says.

“People claim to have lost opportunities for friendships and feel disconnected by playing only computer games,” he notes. “Board games sit in place where they satisfy the gaming urge and form more intimate friendships. That dichotomy is what we want to go for.

“In times like this, board games provide a wonderful way for families, roommates, and friends who are already in close contact to find great fun, entertainment, and bonding away from the screen,” Dietz says.