Increased noise at one of the nation’s busiest airports may have increased the likelihood of low birth-weight babies, new study reveals. Twitter

A Federal Aviation Administration modernization program that changed flight paths near one of the nation’s busiest airports increased noise pollution over residents’ houses. Moreover, it also may have increased the likelihood that mothers in the affected neighborhoods gave birth to low birth-weight babies, according to new research by Susan Averett, Charles A. Dana Professor of Economics at Lafayette College, and two of her colleagues.

The trio examined New Jersey Department of Health birth records from 2004 to 2016, which included mothers’ home addresses to measure airport proximity. They found that babies of mothers who lived under flight paths near Newark Liberty International Airport were about 1.6 percentage points more likely to be born low birth weight compared to mothers who lived close to the airport but not in the direction of runways.

Mothers affected by the noise lived in the direction of runways and received exposure to noise levels over 55 decibels, the U.S. Environmental Protection Agency’s public health threshold. The increased noise came in after the FAA implemented a new federal system called NextGen, designed to modernize the nation’s airspace.

Susan Averett, Charles A. Dana Professor of Economics, and two of her colleagues, found that aviation noise from one of the nation’s busiest airports may have led to low birth weights.“All of sudden people found themselves on this flight path and were saying, ‘Wow, now there’s an air show above my house,’” Averett says.

One important feature of NextGen is the use of precision satellite monitoring, which produces satellite-designed optimum routes that reduce flight time and save fuel. It allows planes to fly closer together along the same flight path. 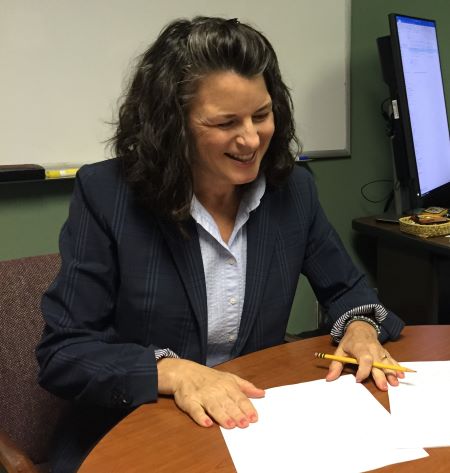 Susan Averett, Charles A. Dana Professor of Economics, and two of her colleagues, found that aviation noise from one of the nation’s busiest airports may have led to low birth weights.

“In reality, however, usage of these optimum routes by more and more aircraft, combined with landing at lower altitudes, has exposed residents living in an area under the new routes to a constant barrage of airplanes flying over their homes,” the paper says, citing CBS News reports from 2015. “These residents were caught off guard, because the implementation of NextGen by the FAA was exempted by the U.S. Congress from normal environmental impact reviews and public hearings.”

Noise pollution has not received adequate attention from policymakers, according to the paper, which is forthcoming in the Journal of Environmental Economics and Management.

Averett says noise pollution has been neglected by economists. “We found older papers that looked at noise pollution around airports,” she says, “but none of those papers focused on birth outcomes, and they were focused more on establishing correlations but not causal relationships.”

Asked if the research might inspire similar studies at other airports, Averett says that’s a possibility.

“There’s a lot of data available to replicate this for other airports and possibly look at the effect of aviation noise on other conditions, such as cardiovascular disease,” she says.