Anti-racism resource guide aims to inform those in Lafayette community and beyond about racial justice, and inspire further work toward a just and equitable society Twitter

Kaleidoscope, a group of student social justice peer educators, has created an anti-racism resource guide on how to learn about, and work toward, racial justice. The effort was spearheaded by Lauren Phillips-Jackson ’21, an anthropology and sociology major. Below, she talks about her vision for the document and its impact as a public resource. 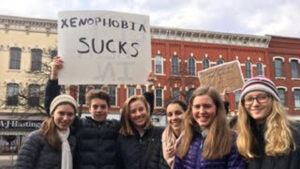 “As Kaleidoscope members, our goal is to expose Lafayette students to the nuances of identity and social justice work; facilitate challenging discussions on the “big eight” identities, which include race, ethnicity, sexual orientation, gender identity, ability, religion/spirituality, nationality, and socioeconomic status; and help move toward a more just and equitable campus. At this crisis point for our country, we wanted to highlight the necessity of having these hard discussions and really confronting the role of systemic racism in America—while also maintaining social distancing, given that we are in quarantine.

“I hope that this document will encourage people to learn about our history, these current movements, and people’s experiences, and see how they can situate themselves in a push for change. I also wanted to ensure there were ways for people who weren’t already embedded in social justice organizations to join the conversation and feel like they could build on their knowledge without feeling guilty for not already having the basics down. Plus, I wanted to make sure that whatever I created amplified the voices of people of color. I thought a community-generated resource sheet where both people of color and their white allies could add resources they felt were beneficial to them in learning about anti-racist work would be a good way to strike that balance.

“In addition, I wanted to do something that would last beyond this specific period of time. Protests and social media campaigns often last for a discrete period of time, and then it’s easy to go back to daily life even though the issues you were protesting haven’t been resolved. I was hoping we could make an ever-evolving document that would spread widely and that people could use as a resource for years to come.”

HOW WE’RE MAKING AN IMPACT:
“Within about a week of generating the idea, sharing it with the Kaleidoscope group, and asking people to contribute resources, we had a robust document of about 30 pages. The goal of this is to be a public resource and community-generated document, and the hope is that people will continue to add to it and it will continue to grow and reflect the voices of the communities it ends up in. Also, this is a document that we hope will be more accessible to Lafayette students because it’s by their peers, for them. We hope it will encourage students and the community to authentically engage with these issues beyond reading headlines in the news, and we hope it reaches everyone and anyone that it can.”

CHANGES WE WANT TO SEE:
“Although I have many specific ideas about what our country could do better, I think the most fundamental is that we need to listen to people of color and take their ideas and concerns seriously. We need a lot of community-led action, where local, state, and national governments will be led by and sit down with people of color and implement their concerns into policies.

“I don’t think these protests today will be the silver bullet that will solve all of our racial problems, but I do think that when we look at parallels to the protests in the ’60s, they can serve as an important reminder that prolonged and fierce pressure from the populace on the government can result in real change. Hopefully, this can be a moment of reckoning where governments will make concrete changes based on these suggestions, and it can serve as a step forward in a very long road toward a racially just America.”

OUR MESSAGE TO THE WORLD:
“Everyone in America has a fundamental responsibility to educate themselves because, unfortunately, we live in a country where our incredibly racist past and the way racism has reverberated across the centuries isn’t really taught to its full extent in our elementary, middle, and high schools. The burden of education often falls on people of color, while white people don’t realize how their privilege is deeply tied to the oppression of other people. Our hope is to impress on people, especially white Americans, that educating yourself about your role is a fundamental responsibility of being an American.”

THE NEXT STEP:
“Kaleidoscope facilitates a lot of Lafayette’s admissions and orientation events, and we always include anti-racist work in those events. We’re really trying to think about how we set that up this year and ensure that, especially for incoming students, we make it extraordinarily clear that Lafayette is an institution that is deeply committed to anti-racist work, and to talking about and remediating these horrible injustices that have been in America for so long, and then follow through to make those promises a reality.”