When the outcry for racial justice started to reverberate throughout the nation following the murder of George Floyd, men’s soccer coach Dennis Bohn divided his team into groups and gave them a single task: devise initiatives in support of the Black Lives Matter movement. 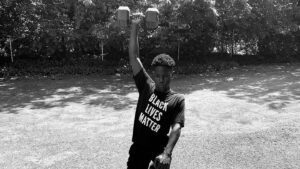 Martin Ssessanga ’21 is part of the group that created #Pards4BLM.

One product of the athletes’ brainstorming was #Pards4BLM, a social media event that challenged participants to perform a physical activity on July 3 for eight minutes and 46 seconds—the length of time associated with Floyd’s death. Members of the Lafayette community and their family members responded in droves, flooding Twitter and Instagram with photos and videos of themselves rising to the challenge. A generous alumnus also pledged to donate $1 for every person who signed up for the event. Ultimately, #Pards4BLM garnered 549 participants and thus a $549 donation, which went to the Black Women’s Health Imperative, a nonprofit organization dedicated to advancing health equity and social justice for Black women.

Below, men’s soccer team members Martin Ssessanga ’21 and Andrew Venezia ’21, who are both economics majors and were both part of the group that created #Pards4BLM, share the details of the team’s successful efforts.

“I’m a student of color, so this hits home for me. It’s been refreshing to see people come out of their comfort zone. They’re having hard conversations, and they’re asking questions and want to get educated. That right there made me think, what can we do?” —Ssessanga

“On the men’s soccer team, we take pride in the diversity of our team. We thought it was really important to the program to take a stand in this important time to let our players know that they matter. We want recruits to know that we’re an inclusive team. That’s the environment that we try to have, and we want to spread that around campus. Not all teams on campus are as diverse as ours, and so we’re in a unique position where we can really make a difference.” —Venezia

HOW WE’RE MAKING AN IMPACT

“We wanted to make the challenge as inclusive as possible, because we realized that a lot of people may want to sign up but not be able to do [a strenuous physical activity] for eight minutes and 46 seconds. So, we told participants that they could do any activity of their choice, like walking or yoga. A lot of people started talking about it, and the president and the athletic director signed up. Some people did yoga, some people treaded water, some people went out for a run, others did eight-minute-long planks. A lot of people showed their support on social media, so it turned out better than expected. It was like nothing I’ve ever seen at Lafayette, so it was pretty refreshing and reaffirming. I hope other students of color in our community do not feel like Lafayette does not care about them, because it is very important that people feel safe, comfortable, and included in the community.” – Ssessanga

“We wanted to get as many people to sign up as we could, and we initially thought 50 or 100 names would be good. We started out targeting Lafayette athletics, and then we kind of evolved and said all of the administration, faculty, staff, and student organizations should get involved. So, we started to spread the word as much as we could, and we realized how big our voice was. We upped our goal to 500 sign-ups, which we ultimately did end up getting. We’re very proud of that. That Friday was a great day. My phone was flooded with #Pards4BLM, and it was awesome to see so many people getting involved and participating. President [Alison] Byerly signed up. Some people ran, others biked. I went for a run with my little sister. Some people even upped the challenge and ran or biked for 8.46 miles, which is awesome. Our goal was to raise our voice and share how we feel. We wanted everyone to know that the Lafayette men’s soccer team takes a stand on this, and it’s not a matter for debate. And we did a good job of spreading awareness, reaching people of all levels at Lafayette, and sharing our message.” – Venezia

CHANGES WE WANT TO SEE

“Police brutality and public safety is a huge issue. I hope that race relations and interactions with cops improve, and there is no prejudice. It would make a huge difference if people can see cops and not immediately feel nervous. I’d also love to see more diversity in Lafayette athletic teams. Men’s soccer is one of the most diverse teams, and I feel very comfortable in our locker room, but that is not something a lot of other athletes can say.” —Ssessanga

OUR MESSAGE TO THE WORLD

“Everyone can do something. Even if it’s something small, do not just be on the sidelines. It’s not political, it’s just humanity. In a time like this, you have to show where you stand, and you show that by your actions. Little by little, if everyone in our community at Lafayette and in the world takes one step every day, that collectively will make even greater change.” —Ssessanga

“Black Lives Matter isn’t a matter of opinion. It’s not even a question. It should just be a fact. That’s the bottom line. There are no ifs, ands, or buts.” —Venezia

“As part of our long-term goals, we’re looking to get books into barber shops in the inner city. Another initiative we started was the LEAD [Leadership, Equity, Access, Diversity] Council, which is a group of alumni of color who are going to mentor people of color on our team. That’s being led by Coach Bohn and alumni of color, and we’re getting that going. We’re also planning on having a soccer match that’s centered around Black Lives Matter, and donations will be sent to a foundation that we choose. Something else we talked about was having a speaker come in once a semester or once a year to talk about racial justice, police brutality, etc.” —Ssessanga

“Our groups all came up with different initiatives and ideas that we’re going to roll out throughout the year. A lot of them revolve around our upcoming soccer season, and the things we could do before, during, and after matches. #Pards4BLM is definitely not going to be the only thing we do. We feel this is a very important issue. And with such a diverse team, we have an opportunity to take a big stance.” —Venezia