What fueled your interest in history and government/law?

“I was always very interested in understanding what events and trends had driven the development of the present state of things, and how an understanding of those events and trends could be used to better understand how future events might play out. I was also cognizant of my desire to go on to law school, and I was looking to build a foundation that would carry me forward as I attended a professional school in the future. At Lafayette, I narrowed my general interest first into a focus on Russia and Eastern Europe and later into a focus on East Asia.”

How did your mentors at Lafayette influence you? 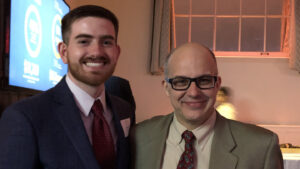 “Professor [Paul] Barclay had the largest impact on me during my time at Lafayette. I originally had him for my ‘Politics and Practice of History’ class, and I had meshed well with his teaching style so I took one of his East Asia classes in the history department. I had always felt that he was the professor that pushed me the most to dive into the details and really get a good understanding of the broader themes of any given course, so he was the natural choice to ask to be my primary thesis adviser. He pushed me to think critically about my project and to really get into the broader issues that it could provide some insight into.”

How did you decide the focus of your honors thesis (Dueling and Its Historical Decline in France and the U.S. 1700-1900), and what was your biggest takeaway? 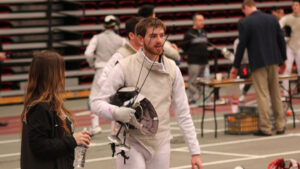 Mange competed in fencing at Lafayette.

“I originally thought about a comparative piece between the development of fencing in France and Kendo in Japan, but it quickly became apparent that there simply were not enough sources that I was able to access without proficiency in Japanese. I still wanted to do a comparative piece, and Professor Barclay and I both felt that based on my preliminary research, the United States was the natural counterpart to France in the type of discussion I was looking to build. From there it made more sense to be focused on the end of dueling rather than the start of fencing. Although those two events are inseparable in France, the end of the dueling story in the United States is quite a bit more interesting; the start of fencing as it exists here today was a pretty direct importation from the preexisting French tradition. My biggest takeaway was the amount of commitment it takes to stick with a singular topic for more than a year and to consistently work toward one project on my own time rather than as part of a broader class.”

How did your time at Lafayette influence you?

“The biggest impact Lafayette has had on my experiences at Columbia so far is in how prepared I felt for the course load. Law school is definitely more demanding both inside and outside of the classroom, but I feel that I have been able to keep up because I went through Lafayette’s history and government programs. The biggest challenge on a day to day basis at CLS is definitely the volume of the reading assigned and the fact that you’re responsible for all of it when it comes time for the final exam. Through my time at Lafayette, I developed the skills necessary to be able to engage with that volume of information at the level necessary to succeed.”