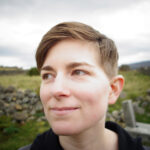 With the support of the fellowship, which is one of the most prestigious academic prizes in Europe, Groo will spend a year conducting research at the Institute of Musicology and Media at Humboldt University in Berlin. The experience will culminate in the completion of Groo’s second book, tentatively titled Images at the End of the World: Historicity and Mourning in the 21st Century.

While Groo’s fellowship was originally slated to begin this June, it has now been deferred to June 2021 due to travel restrictions brought about by the coronavirus pandemic. Groo says she hopes her project is going to change the way we understand the evidentiary and historical value of digital images.

“This is the first major award I’ve won for my work,” she says. “I feel very lucky because every award is competitive, and there are so many worthy research projects out there. I’m grateful that I will have a full year to work on this book, and I look forward to immersing myself in the media studies research community in Berlin.”

Groo explains that the idea behind her second book was inspired by several questions that arose while she was writing her first book, Bad Film Histories: Ethnography and the Early Archive, which explores approaches to film history, film archives, and film artifacts. In her upcoming publication, Groo will study the ways in which new media function as historical artifacts—how they often compel viewers to mourn, experience nostalgia, or encounter the specters of past time—despite their seeming lack of artifactual authority.

“We tend to think that photographs and films from the analog era have a privileged relationship to history, that they are secure historical documents. And, by contrast, we often think about new media as this era when all of those historical promises fall apart. We think the digital can’t be trusted,” Groo says. “In my work, I hope to trouble that rigid dividing line between 20th-century media artifacts and 21st-century ones.”

Groo is particularly looking forward to working with Wolfgang Ernst, who is professor and chair at the Institute of Musicology and Media Studies. He also significantly contributed to what has come to be known as the “Berlin School” of media archaeology, a branch of media studies that emphasizes the materiality and physical properties of technology. Groo says that working with Ernst will help to challenge her ideas and shape the final outcome of her book project.

And despite the fact that Groo’s trip has been delayed a year, her excitement about the opportunity hasn’t dimmed in the slightest.

“If I have to wait a year, it seems like a very small and insignificant price to pay,” Groo says. “I am extremely grateful to have received the award, and it feels good to have something to plan for right now.”