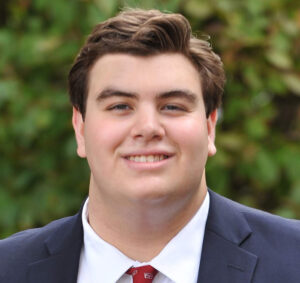 What my research is about:
“My research focuses on the current politicization of the Supreme Court, specifically where Justice Stephen Breyer falls on the political spectrum, and what role he fills on the Supreme Court. First, I gained a better understanding of where the Court is politically and established four broad preliminary roles that each justice can play: team player, teammate, ideologue, and radical. Then I tried to figure out who Justice Breyer is as a person. Currently, I am looking at his decisions as a justice and connecting them to his personality. My early research suggests Breyer falls under the role of ideologue: a justice whose impact derives from changing ideological norms for later justices, not necessarily writing many important decisions themselves.

“With the recent passing of Justice Ruth Bader Ginsburg and the appointment of two new justices in the past four years, it’s crucial that we gain an understanding of how current members of the Supreme Court will impact society as a whole. Understanding the role justices play may give us clearer predictions as to how they will decide cases in the future.”

What surprised me the most:
“I was shocked that our surface understanding of justices’ ideology often clouds our judgment of how they may actually vote. When understanding who justices are as people, you can find votes or decisions that the public may perceive as shocking as relatively in line with a given justice’s personality.”

Why this experience is valuable:
“As I’m planning on pursuing a career in academia, this opportunity has allowed me to conduct research with relative autonomy, enabling me to reach my own conclusions and findings.”