What if tiny microbes of bacterial life living in soil and sand could help keep roads, buildings, and bridges from being damaged in earthquakes, or help engineers when they want to support weak or loose soils to make an excavation?

The answers to these questions could be revealed thanks in part to a crowdsourcing project that students in professor of biology Laurie Caslake’s Microbiology class and  associate professor of civil and environmental engineering Michael McGuire’s Intro to Geotechnical Engineering class are taking part in.

Students across multiple time zones have been collecting samples near their homes—from the Adirondack Mountains to rural Oklahoma to the top of Mount Lafayette, New Hampshire—and are now testing the soils using prepared kits mailed from the College and an adapted version of testing that biologists or geotechnical engineers would use in a laboratory setting. 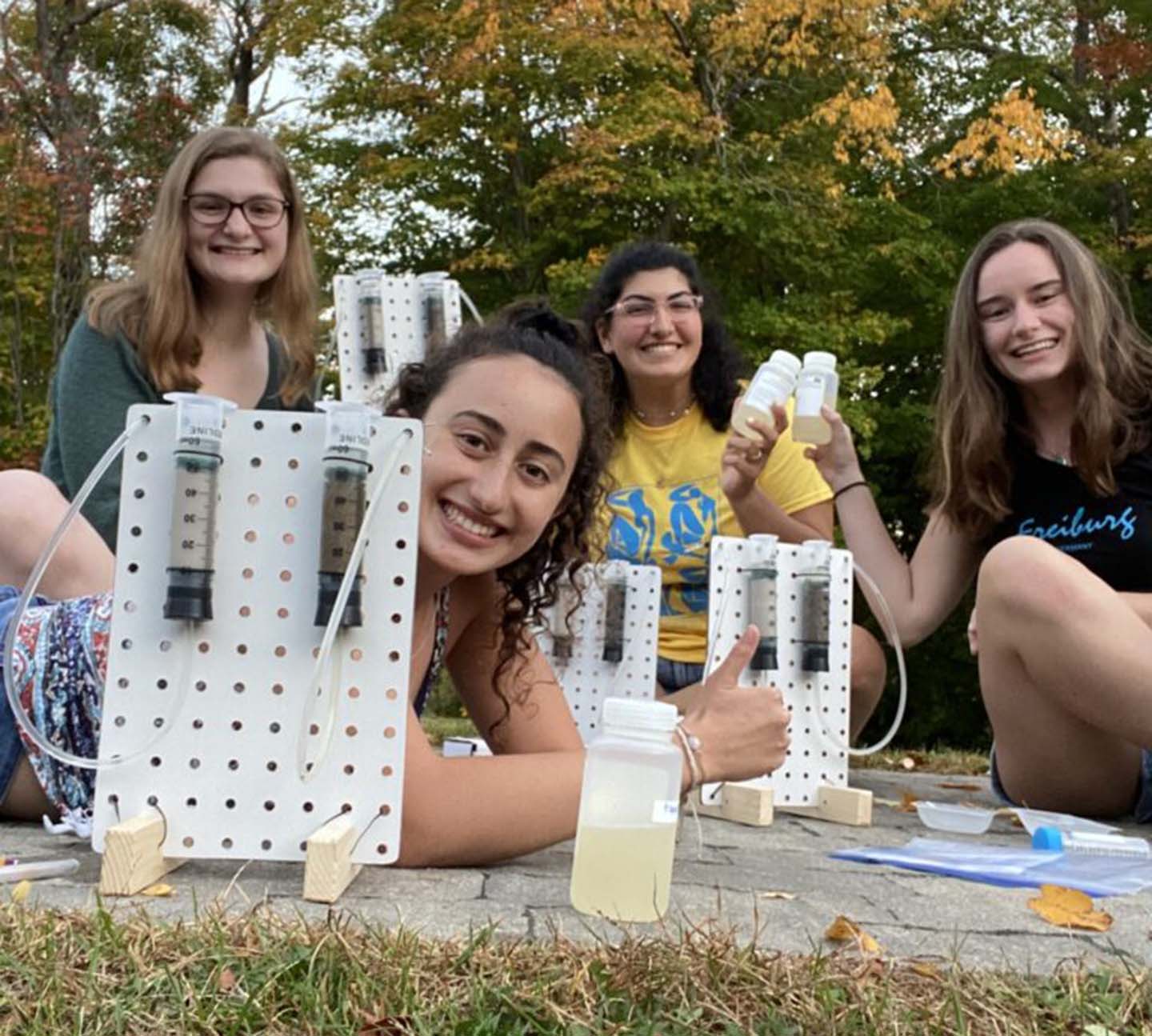 (L-R) Leigh Jacobsen ‘22, Zoey Hofmann ‘22, Alexandra Kasparian ‘22, and Kate Keane ‘22 decided to live in Vermont together for the semester. Here, the students show off the kits used for the joint biology and civil engineering lab.

The goal is to feed the naturally occurring bacteria in the soil samples, use the bacteria’s natural processes to cement the soils with calcium carbonate, and find out how much the strength of the soil is increased through this process.

“We’ve had students who are being really creative about this. Some students have added trips to the beach. In some cases, they’ve had to reach out to relatives to get the history of where they live so they know where to find sand. We’ve got a smattering of soils from all over,” says McGuire. “We’ve asked them to think about where they go fishing or swimming, or the parks they visit. Now that they’ve shared that and written it up, they’re working on classifying and I’m working right along with them.”

The Microbial Induced Calcite Precipitation (MICP) project is funded by a National Science Foundation grant obtained by Caslake and by Simon Cameron Long professor of civil and environmental engineering, Mary Roth, who are the principal investigators on the project.

“Mary and I wrote the grant a few years ago, and our initial goal was to see if bacteria could change the permeability of soil. I’m the microbiologist and Mary is the civil engineer, so it really was a great merging of two disciplines,” Caslake explains. “We had some money left and were approved to switch the project to study microbial induced calcite precipitation (MICP), and what we would like to do is to create sampling, treating, and testing protocols so that students, faculty, and researchers around the world can use the approach to collect data using their local soils. As the amount of data on different soils increase, it will be possible for an engineer to use the information to evaluate whether MICP might be an effective treatment for soils in their project.”

Two versions of the kits were sent out to McGuire and Caslake’s students. The engineering students were given supplies to classify the soils and both groups of students were given supplies to sample and treat the soils.  The kits include metal meshes (to separate soil particles by size), pegboard (to support the samples), syringes, tubing, a chemical mix (to hold the soils and feed the bacteria), and 500-gram scales obtained at a fraction of the price than those normally found in classrooms, which allowed the project to also be cost-effective.

While other higher education institutions are looking at MICP as a soil treatment option, Lafayette is the first to utilize crowdsourcing sampling soils from around the country to determine how different types of soils respond to this treatment.

“The idea is that we’re sort of the guinea pigs—the students in my class and in professor Caslake’s—and we’re working a lot of the kinks out,” says McGuire. “In the future, there will be a refined version of this which is deployed at a much larger scale.”

“For me, it’s been fun watching the students, because I think working from home, they’re more careful,” says Caslake. “They’re a little more hesitant about each step. But I think they’re going to figure it out and feel more like scientists by the time they’re finished, because they’ll have completed this project by themselves.”