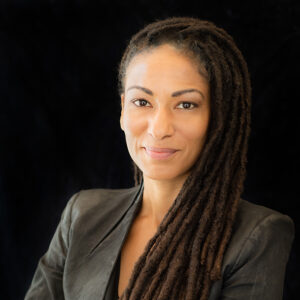 Technology is often seen as a tool to solve problems and improve lives. But if racism infects our technology, then whom is it benefiting?

The Lafayette College community had an opportunity to learn more about the intersection of race and technology from Ruha Benjamin, associate professor of African American Studies at Princeton University, who delivered a virtual lecture Oct. 7. Benjamin, a sociologist who specializes in the study of science, technology, and medicine; race and gender; knowledge and power, is the author of several books, including Race After Technology.

Benjamin discussed the history of racism and technology, shared specific examples of discriminatory design, and offered forward-looking inspiration about how technology—and the world—can be constructed differently.

“We need to think about what kind of world we want to create,” Benjamin said. “There is this idea that technology is either going to slay us or save us. They seem like opposing stories, but they share an underlying logic: in both cases, the techno-determinist vision that we are either being harmed or helped. Our own agency is lost from the story.

The lecture was co-sponsored by Lafayette’s Hanson Center for Inclusive STEM Education and Studies, the Forum on Technology and Liberal Arts, and the Resnik and Landis Lecture Series. President Alison Byerly and Jenn Rossmann, professor of mechanical engineering and co-director of the Hanson Center, provided opening remarks. Several faculty members served as panelists and facilitated a post-lecture Q&A: Mary Armstrong, Charles A. Dana Professor of Women’s, Gender, and Sexuality Studies and English, Benjamin Cohen, associate professor and chair of engineering studies, and Monica Mariella Salas Landa, assistant professor of anthropology.

“Of course, I’m not saying that racism is good. I’m speaking of the literal capacity of racism to produce things of value to some, even as it wreaks havoc on others. Many of us are still taught to think of racism as an aberration, a glitch, an accident, an isolated incident, a bad apple in the backwoods, and outdated. Rather than as innovative, systemic, diffuse, an attached incident, the entire orchard, in the ivory tower, in the tech industry, forward-looking, productive. In my field of sociology, we often say race is socially constructed. But we often fail to state the corollary—that racism constructs.”

“Race and technology shape each other. People are accustomed to thinking about the social and ethical impacts of technology, but that’s only half of the story. Social norms and values all exist prior to any given tech development. So it’s not simply the impacts but the inputs that we need to be concerned about.”

“Imagination is not an ephemeral afterthought that we have the luxury to dismiss or romanticize. It’s a battleground—an input and output of technology and social order. In fact, we should acknowledge that many people are forced to live within someone else’s imagination. And one of the things we have to come to grips with is how the nightmares that many people are forced to endure are the underside of the elite fantasies about efficiency, profit, and social control. Racism, among other axes of domination, helps to produce this fragmented imagination where we have misery for some, monopoly for others. This means that for those of us who want to construct a different social reality, one that is grounded in justice and joy, we can’t only critique the underside. We have to wrestle with the deep investment, the desire even, that many people have for social domination.”