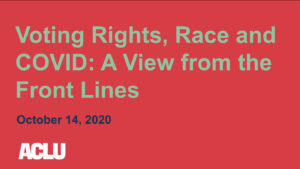 It’s been 100 years since the ratification of the 19th amendment, which granted women the right to vote. Despite that victory and progress made since, the fight for equal access to the ballot continues, particularly for people of color.

COVID-19 has only further intensified the battle. The pandemic has amplified racial inequalities, complicated voting logistics, and agitated an already contentious political environment.

On Oct. 14, members of the Lafayette community gathered virtually to hear American Civil Liberties Union (ACLU) attorneys discuss these matters. Their presentation, “Voting Rights, Race and COVID: A View from the Front Lines,” was sponsored by the College’s women’s, gender, and sexuality studies (WGSS) program.

Mary Armstrong, Charles A. Dana Professor of Women’s, Gender, and Sexuality Studies and English, provided opening remarks, expressing that the goal of the event was to both celebrate the centenary of women’s voting in the United States and illuminate how access to the vote remains deeply fraught in our democracy.

Armstrong shared that WGSS started planning the event a year ago—before COVID-19 was a household term. The pandemic made the conversation all the more relevant.

Sonia Gill, senior legislative counsel in the National Policy Advocacy Department of the ACLU, and Bobby Hoffman, deputy director of the ACLU Democracy Division, led the conversation, which was followed by an interactive Q&A.

During their talk, Gill and Hoffman shared the history of voting rights in the United States, the impact COVID is having on the current election cycle, attacks on election legitimacy, and instructions on how to vote and ensure your voice is heard.

Here are four takeaways from the talk:

Voting by mail is safe.

“There have been alarms raised about voter fraud by mail. You should know that voter fraud is extremely rare. Mail-based voting fraud is extremely rare,” Gill said. “In fact, it’s statistically more likely that you’ll get struck by lightning or there will be a Big Foot sighting than there is of someone committing voter fraud. It is safe and secure and a reliable process to cast a ballot. There are a lot of procedural safeguards in place to ensure your ballot is protected from interference.

“Voting by mail is a very popular option, especially during a pandemic because it mitigates risk by eliminating person to person contact. Voting by mail first became popularized during the Civil War when Union soldiers used mail to cast their ballots in the presidential election of 1860. It’s been historically used by our military for over 100 years. It has been used historically by elderly voters and those who are away from their voting jurisdictions during an election. Today, voting is a highly sophisticated system. There are states—Washington, Oregon, Colorado, and Hawaii— that conduct their elections entirely by mail.” 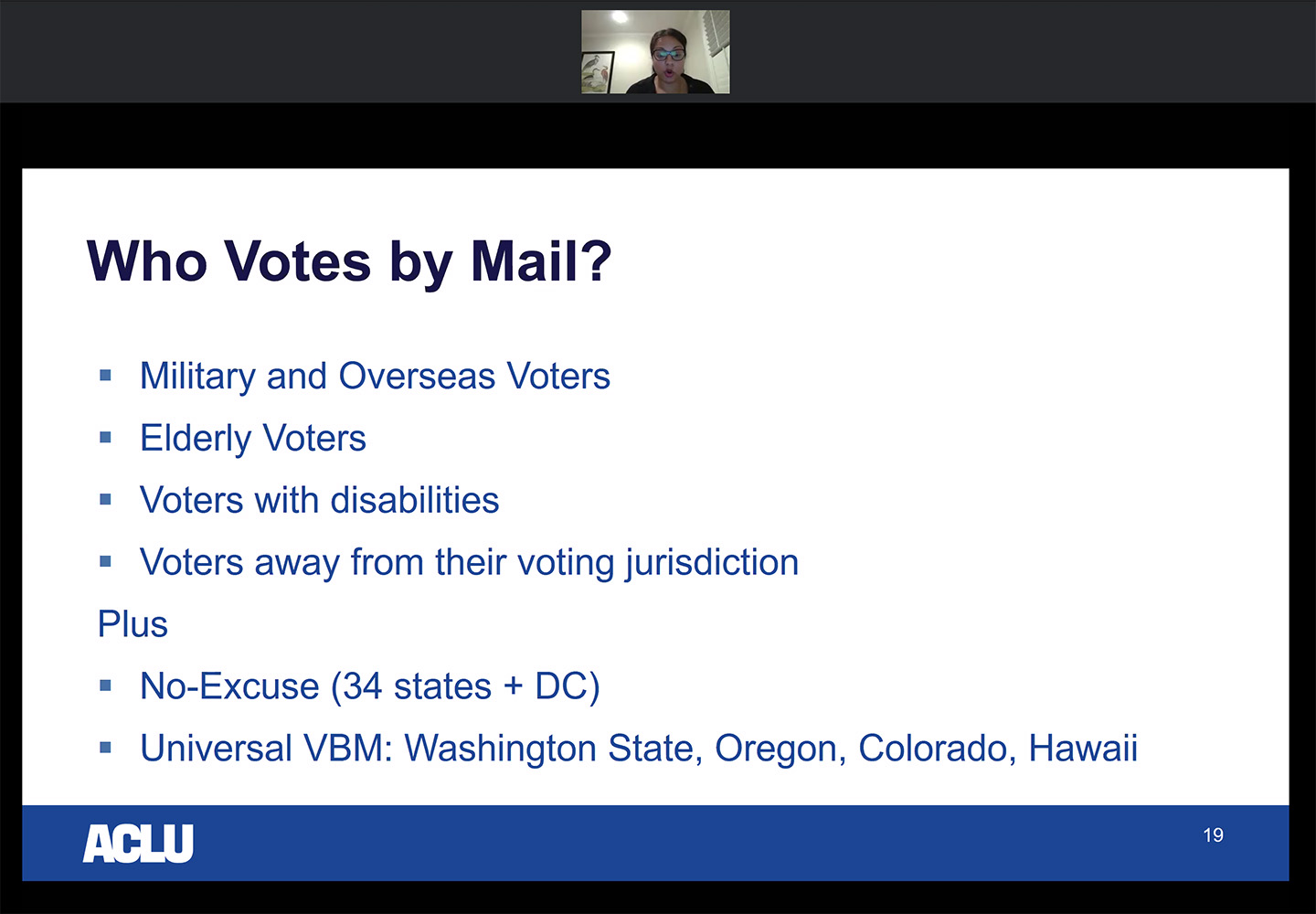 “Voter intimidation has been in the news, but hopefully it’s not something we will see much of on Election Day, but certainly it might be something people are thinking about as they go to cast a ballot,” Hoffman said. “I want to reassure folks that it is illegal to intimidate voters, and it is a federal crime. Some examples of voter intimidation include:

If you do spot or have any issues with voter intimidation, Hoffman provided these resources:

This November, be patient.

“The most important thing we can do after Election Day is be patient, especially in Pennsylvania and Wisconsin; those two states are going to be pivotal battlegrounds,” Hoffman said. “They don’t start processing absentee ballots until the day of the election. Given the large amount of mail- in and absentee ballots that are going to be occurring, I think we need to be really cognizant of that fact and be aware that it could be days or even weeks waiting for the official election results to be given.” 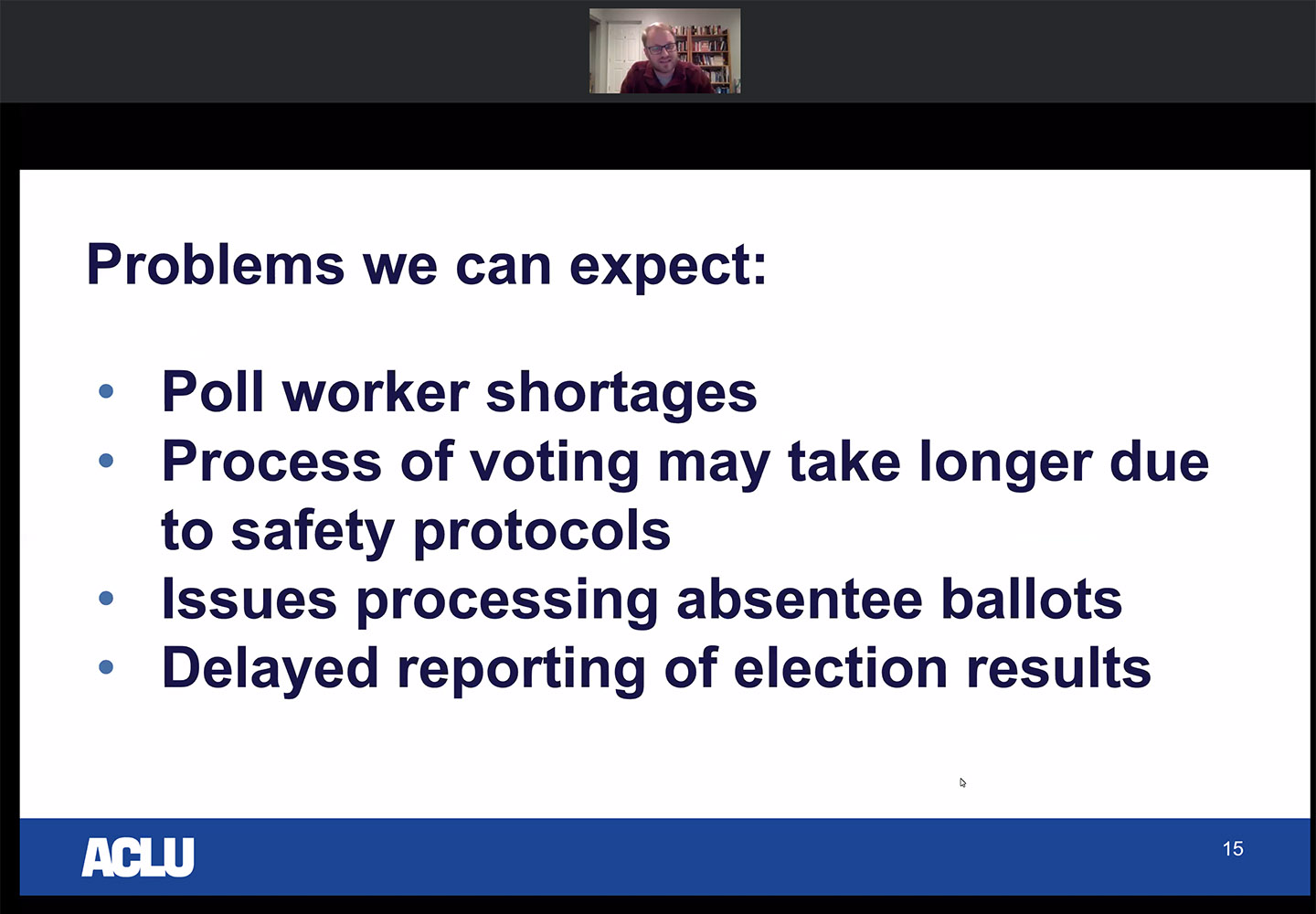 The College is commemorating 50 years of coeducation through a variety of activities, including virtual events, exhibitions, and lectures. Faculty, staff, students, alumni, and parents are invited to help honor the contributions of women to Lafayette’s past, present, and future.