Jeremy Zallen, assistant professor of history, was awarded the American Historical Association’s 2020 Albert J. Beveridge Award on the history of the United States, Latin America, or Canada, from 1492 to the present for his book American Lucifers: The Dark History of Artificial Light, 1750-1865. 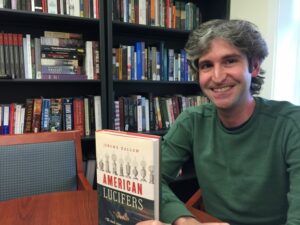 Zallen describes in his book how people struggled and risked their lives throughout the 18th and 19th centuries to provide light for an expanding economy, laying out facts that show how the production of whale oil, gas, and kerosene exploited children and women laborers, instituted industrial slavery, and caused long-lasting environmental damage.

The Albert J. Beveridge Award, honoring the U.S. Senator (Indiana, 1899—1911), was established on a biennial basis in 1939 and has been awarded annually since 1945. Recipients of the AHA’s annual prizes will be recognized during a ceremony at the January 2022 AHA annual meeting.

“Winning this award is probably the highest honor I could have dreamed of. The American Historical Association is the principal organization for historians in the United States, and the Albert J. Beveridge Award is their award ‘in American history for a distinguished book on the history of the United States, Latin America, or Canada, from 1492 to the present.’ What I hope this means is that more people, from the lay public to graduate students, will read American Lucifers. And I hope readers question how some of the seemingly smallest things in their own lives might connect them to vast, hidden webs of power, energy, and labor like illuminants did for early American producers and consumers,” said Zallen.

Zallen’s teaching interests and scholarly work examine United States history; Atlantic world; slavery, race, and capitalism; labor history; environmental history; and spatial history. His honors include the Presidential Scholar Fellowship, Harvard University, 2008-2014; Harvard University Certificate of Distinction in Teaching, Harvard University, 2011 and 2013, and Project on Justice, Welfare, and Economics Fellowship, Harvard University. His honors include being a finalist for George Perkins Marsh Prize for best book in environmental history (American Society for Environmental History), for American Lucifers; Barra Sabbatical Fellowship, McNeil Center for Early American Studies, University of Pennsylvania, 2017-2018; and the Vivian A. Paladin Award for the best article published in Montana: The Magazine of Western History in the previous year, for “‘Dead Work,’ Electric Futures, and the Hidden History of the Gilded Age,” 2016.

Catching up with Recent History Grads