Queer Black author and performer reads their award-winning poetry, opening a window into the more equitable society that could be Twitter

In the eyes of Danez Smith—an award-winning queer Black author and performer from St. Paul, Minn.—poetry is a window through which we can not only see a better, more equitable world, but also invite it into our reality.

“That’s the opportunity and the gift we have to offer to our audiences as poets and artists that want to make an effect on the world, and that want to make more room for our people,” said Smith as they delivered their Queer History Month keynote address to Lafayette students, faculty, and staff via Zoom Oct. 8. “It is important that you call into being the world in which your people are free. In lines and poems, you plant that idea in people’s minds, so that one day we can get there.” 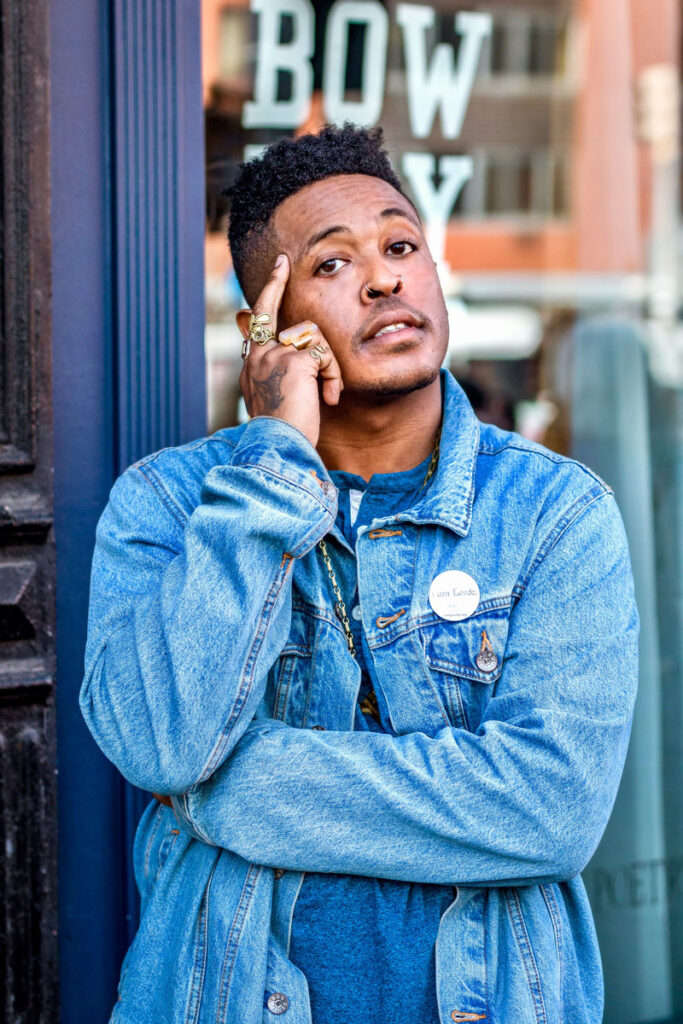 A founding member of the Dark Noise Collective—which features the powerful work of contemporary poets and has been featured in The New York Times, BuzzFeed, The Late Show with Stephen Colbert, and PBS NewsHour—Smith has authored three books that have garnered many accolades. Their first, [insert] Boy, won the Lambda Literary Award for Gay Poetry in 2014, while their book of poems Don’t Call Us Dead earned the Forward Prize for Best Collection and the Midwest Booksellers Choice award and was a finalist for the 2017 National Book Award for Poetry. Smith’s latest cutting-edge poetry book, Homie, was published in January 2020.

After opening the keynote event with a reading of “Brothers,” a poem about discrimination written by widely known queer Black poet Pat Parker, Smith went on to describe what they envisioned the future to be for the queer community.

Their poetry, Smith explained, is a blueprint for what this new world could look like, and they encouraged their listeners to vote in the upcoming election in order to bring about change in “this very boring, very violent partisan system of politics.” Smith then read their poem titled “my president,” which they say is “about everyone but Donald” and which names Smith’s personal heroes and Black icons—their mother, their grandmother, Beyoncé, Colin Kaepernick, and more—as their true leaders.

Smith went on to read several of their poems, including “jumped!,” “say it with your whole black mouth,” and “waiting on you to die so I can be myself,” touching on themes such as kinship, building community, having compassion, finding love, and learning about who you are—things that people of color, especially transgender people of color, have not had access to in a fair, equitable, and safe way in our country.

The evening ended with a conversation between Smith and Grayce Walker ’22, who majors in English and women’s, gender, and sexuality studies. Walker asked Smith questions about the importance of building and taking care of the queer Black community.

“I don’t think you can dream new structures for a community that you don’t love and know and hold in memory and in heart,” Smith said. “So that’s what it is: How can we use this love that we have fostered within ourselves and let that radiate out in the work that we do?”

Smith continued to say that doing things to intentionally take care of their bodies and mental health—like exercising, drinking water, wearing a mask, and unplugging from the media—are the best things that members of the queer Black community can do to take care of themselves.

“There’s nobody else that I would like to see be a little bit more selfish in these times—it’s Black folks and it’s queer folks. Carve out a little bit more space and grace for yourself. And after you have figured out ways to take care of balancing yourself, when you have the capacity, pass that on. Figure out how to use that image for somebody else, whether that be going out and doing work in your community, making a meal, or having a phone call with somebody that you know might be having a tough time. Small can still be the greatest possible good that you can put forward into the world.”

A Q&A session was not held at the closing of the keynote address. Grayson Thompson, assistant director of intercultural development and coordinator of gender and sexuality programs, who organized the event, explained this was intentionally done so that the evening could be “a space where queer people, especially Black people, can speak without being interrogated … a space with their stories not filled with the voices of other folks.”