The power of history comes in who tells the story: the victor or the vanquished. Each has a perspective, but details selected drive themes that lead to very different outcomes.

Some stories can be hard to hear because it means acknowledging certain facts that may run counter to the idyllic picture we like to imagine.

Consider Thanksgiving or, as descendants of Indigenous Americans call it, the National Day of Mourning.

The theater department waded into such storytelling with an original production based on an old show: You Are There. 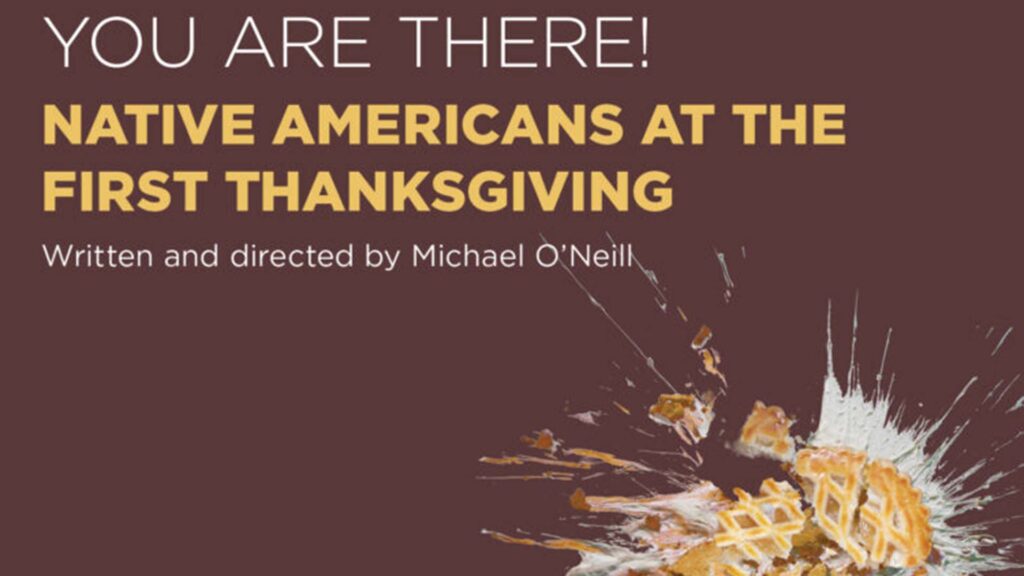 People may remember the radio show that transitioned to a Walter Cronkite broadcast. Each episode took listeners and viewers back in time to recreate a significant historical event.

But when blending the dominant culture’s belief about Thanksgiving with the Native American perspective, the department walked a fine satirical line that would expose myths of the victor and shine an empathetic light on the vanquished.

Michael O’Neill, associate professor, wrote the script and directed the radio show performance, transporting listeners back to the Plymouth Plantation in 1621.

Prior to the broadcast, voice actors, director, and crew had a discussion, facilitated by Alex Hendrickson, chaplin, about the process of creating the story, the difficulty of portraying native peoples, and how the production has impacted their thinking.

The script took listeners through the arrival of the Pilgrims in 1620 to the first feast in 1621 and all that happened in between as European settlers attempted to survive in a land that they didn’t understand and leveraged Indigenous knowledge while at the same time acting morally superior. Historical facts in the script countered many popularly held conceptions around clothing, names, foods eaten, dates, and relationships.

Scattered between scenes where classic radio ads for popular products from the original 1947 radio broadcasts.

Listen to the show (with the exception that it won’t be available on the National Day of Mourning).

Categorized in: Faculty and Staff, News and Features, The Arts, Theater
Tagged with: Lafayette Arts