Nov. 30 marks the 140th anniversary of Rutherford B. Hayes’ visit to Lafayette College for the rededication of Pardee Hall, an event that attracted a who’s who list of late 19th century politicians, academics, presidential cabinet members, and a renowned general.

Among those accompanying the 19th president of the United States and the only sitting president to ever to visit Lafayette: Gen. William Tecumseh Sherman, commanding general of the Army (read more about the why the famous general was part of the presidential entourage in Jeff Ruthizer’s ’62 essay below); U.S. Rep. Horatio Gates Fisher, Class of 1855 (later served as president of the alumni association); Daniel Coit Gilman, president of Johns Hopkins University; Secretary of War Alexander Ramsey, Pennsylvania Gov. Henry Hoyt; and Abraham Hazen, assistant postmaster general. Ramsey, Hoyt, and Hazen attended Lafayette.

Introduced by Hoyt, Hayes, a proponent of universal education, delivered a 400-word speech, part of which declared:

“The best government under a republic will be that with the best education. Ignorant voters are powder and ball for the demagogue. Therefore, it is that from the beginning Washington and Jefferson and the Fathers all urged upon the people on every suitable occasion the importance of popular education.” 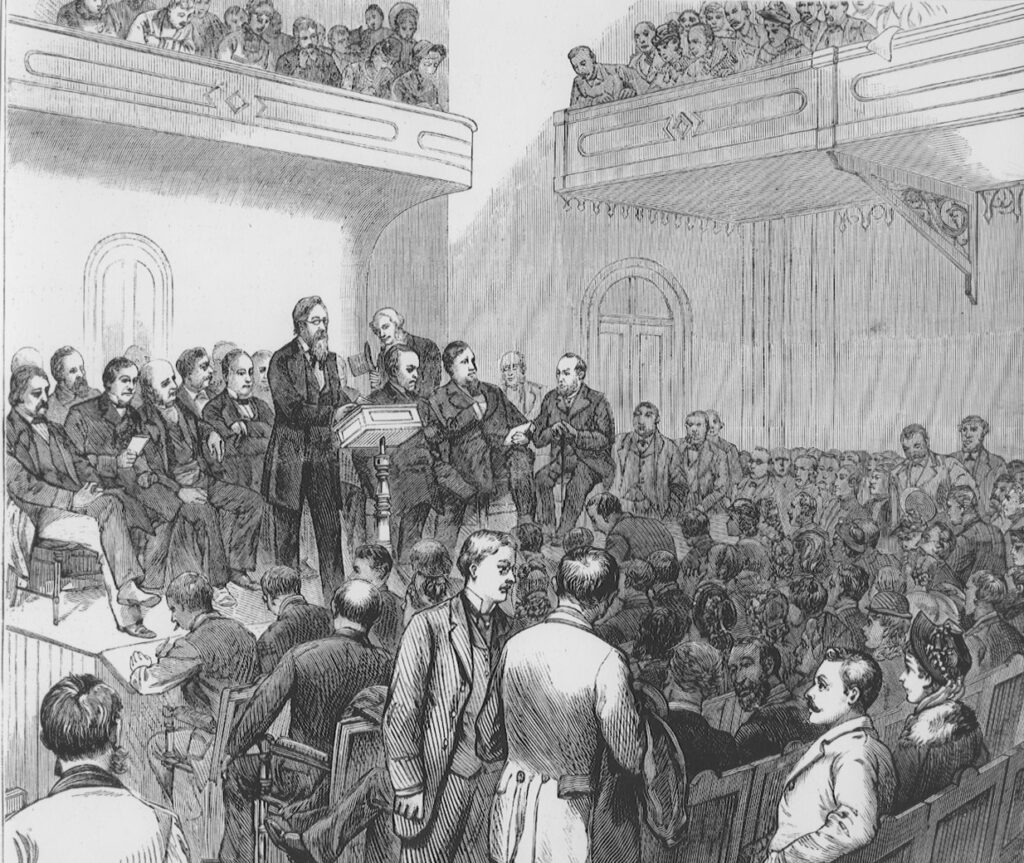 Pardee Hall’s rededication was featured in Frank Leslie’s Illustrated Weekly, a popular literary and news publication of the day.

At the end of his remarks, Hayes said, “I am glad to be here, glad to join with you in saying God bless Mr. Pardee,” which, according to an account by legendary Lafayette English professor Francis A. March, led to loud applause and calls for Ario Pardee to step forward. Lafayette College President William Cattell helped search for him in the crowd, and Pardee, trying to avoid the attention, offered a humble statement.

“I rejoice with you that we can again look upon this building completely restored and even improved for its work,” said Pardee, the industrialist and benefactor who donated $250,000 for its construction. “But Dr. Cattell is wrong in saying that it is my money that rebuilt it. It was through the wise forethought of the trustees in keeping up an ample insurance that we have today the hall restored to the College.”

A plaque commemorating the visit sits at Pardee Hall where the historic even took place. 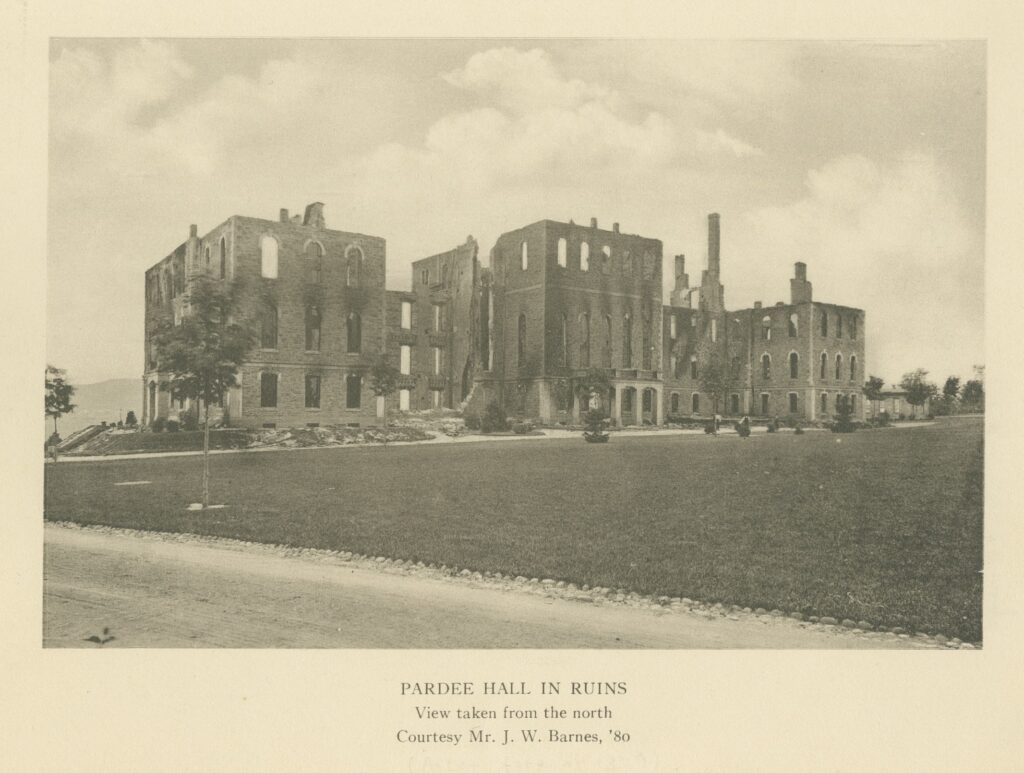 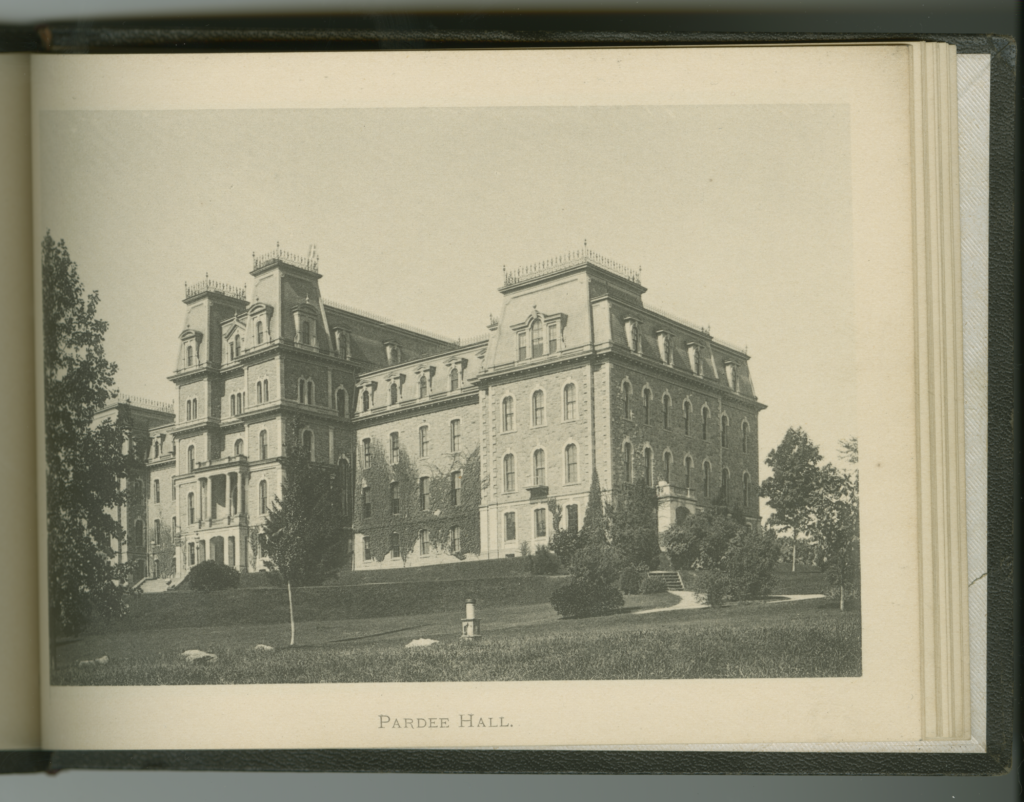 On the occasion of the 140th anniversary of Hayes’ visit and the rededication of Pardee Hall, Jeff Ruthizer ’62, who has maintained a keen interest in Lafayette history since his undergraduate days, has written an essay on the event.