Africana Studies hosts speaker Damareo Cooper: ‘When we involve all of us, we all win’ Twitter

How can building relationships with different types of people help us get the things that we want and need?

Damareo Cooper, a Black political organizer and director of place-based power at the Center for Popular Democracy, discussed the benefits of activism with Lafayette students, faculty, and staff in a Zoom lecture hosted by Africana Studies.

Cooper has served as the executive director of BlackPAC, an independent, Black-led organization that uses the power of year-round political engagement and elections to change our economic, justice, and political systems. He also was selected into the BMe Genius Fellowship, a national network of Black males who contribute to better communities nationwide. 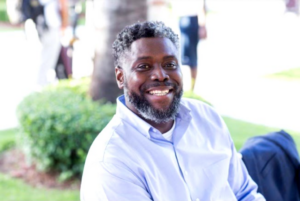 During the Feb. 19 event, which was moderated by chair of Africana Studies Wendy Wilson-Fall, Cooper discussed his own personal journey into community organizing and explained how organizing is about building power and building relationships.

“What is power?” Cooper asked the audience. “Power is the ability to act. It is not necessarily a good or a bad thing. We are often taught that power is bad or that wanting power is bad. Power is not bad. Power is neutral. Who has it and what they decide to do with it decides if power is bad. There are only two ways to have power in this country—organized people or organized money. Organized people means that you have enough relationships that you can balance the power of money.”

Cooper went on to explain that successful organizers work on building something called “relational power,” which is the opposite of a pyramid where someone is at the top and everyone at the bottom is executing the agenda of that person at the top. Rather, relational power allows everyone to act together, which is necessary for organizers to be aligned around what they collectively need in their community.

“When we involve all of us, we all win,” advised Cooper, who also shared guidance on organizing your own meetings when you find a cause you want to get behind. “Never have a meeting that you don’t know the outcome of. You’re the organizer. You’re the one inviting people to the meeting. You should have conversations with those who are coming to make sure they understand what the goals of the meeting are.”

Audience members were given the opportunity to ask Cooper questions.

“What does organizing look like in the parts that aren’t visible to the public?” asked Viet Trinh, visiting professor of Africana studies.

“Every day, you want to have at least five one-on-one conversations. These are with people who understand what their self-interest is. The initial work is just building relationships. Most of the in-between part is having a volume of conversations. It’s about listening and learning, and having a conversation about why they’re doing what they’re doing. Then the other work is about ordering those relationships and moving them to events,” Cooper responded.

“Do you have any tips on finding your role in community organizing?” asked Emily Ortiz ’23.

“Just get in,” replied Cooper. “You can go to websites such as Center for Popular Democracy and be connected to 55 grassroots organizations across the country, or groups like Center for Community Change. Or, create your own lane. If it’s not being addressed in the community you’re in, start organizing. I followed my own lane a bit by accident. I answered an ad in the paper and fell in love with the work.”