Six awardees and three alternates were named in 2020-21 Twitter

Lafayette is among the colleges and universities that produced the most 2020-21 U.S. Fulbright students, according to an announcement by the Department of State’s Bureau of Educational and Cultural Affairs.

Fulbright is the government’s flagship international educational exchange program. Top-producing institutions, a designation begun in 2009-10, are highlighted annually in The Chronicle of Higher Education. Lafayette previously received the honor for 2011-12, 2014-15, 2015-16, and 2017-18. 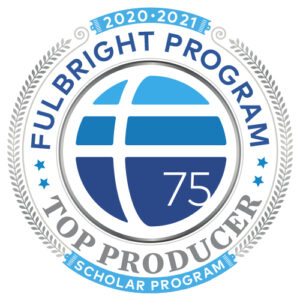 The U.S. Department of State and the Institute of International Education (IIE) have been working closely with Fulbright Commissions and U.S. Embassies around the world to determine, on a country-by-country basis, whether it is feasible for 2020-2021 exchange programs to take place in the spring 2021 semester.

“This was a special group. They weren’t competitive with each other, and some were even applying to the same programs. I remember them helping each other with their applications, and the camaraderie and engagement with this group was just really unique,” says Julia Goldberg, associate dean of advising and co-curricular programs.

Students should begin working on their applications during the spring semester and throughout the summer prior to the year they are applying for, since their campus applications are due for internal review at the beginning of the fall semester; applications are officially submitted to Fulbright early October. The hard part is then waiting until the following January or February to find out if they are still in the running for awards, after which their applications are sent to host countries for further review, which makes the competitive awards cycle even more time consuming.

“I was pleased to see that some awardees and alternates actually decided to reapply this year for either the same or different programs,” says Goldberg. “Those who applied for different programs this year may have done so as a result of the intense reflection and clarification process accrued simply by having gone through the application itself last year. As a result, students often expand their interests. Additionally, many of this year’s (2021-22) applicants heard about the Fulbright from their friends who applied in the past. As a result, this year’s applicant pool was as large as last year’s, which we love to see.”