Poetry, in some regards, seems to be the work of seeing the future by mining the past in order to better understand the present.

Guest poet and judge at the 2021 Jean E. Corrie Poetry Prize, Edgar Kunz, introducing one of his poems, “After the Hurricane,” explained it as this: Preparing himself for things he would soon go through, mainly his father’s death, unaware that he was doing such work.

That poem closely observes his father as he makes a van his home following a hurricane and dreams of repairing a broken relationship. 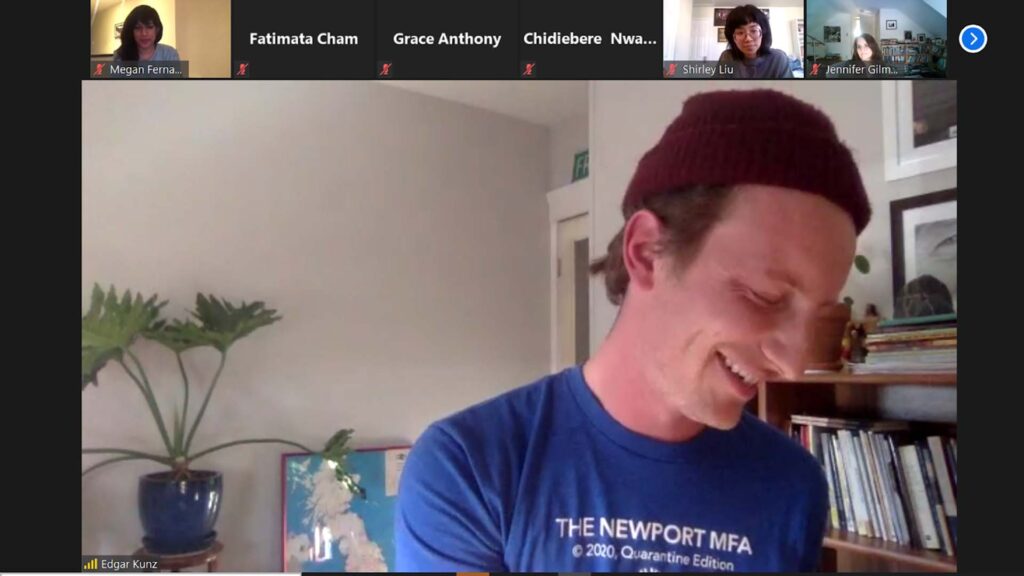 Kunz read from his prize-winning book Tap Out and also a few new pieces that ranged from his work as a food taster at McCormick Spices to his observations of ugly heron.

He also served as judge, selecting a winner and runner-up from over 50 submissions of first-, second-, and third-year student poets.

Shirley Liu ’23 took the top prize for their poem entitled 黄, the Chinese character pronounced huang, which translates to yellow in English. The poem explores the complex relationship between cultures, skin colors, and self-acceptance.

“I’ve never really written poetry before this piece, so hearing that people like my poetry and that a place for my voice exists has been hugely encouraging in my decision to continue pursuing writing,” says Liu. 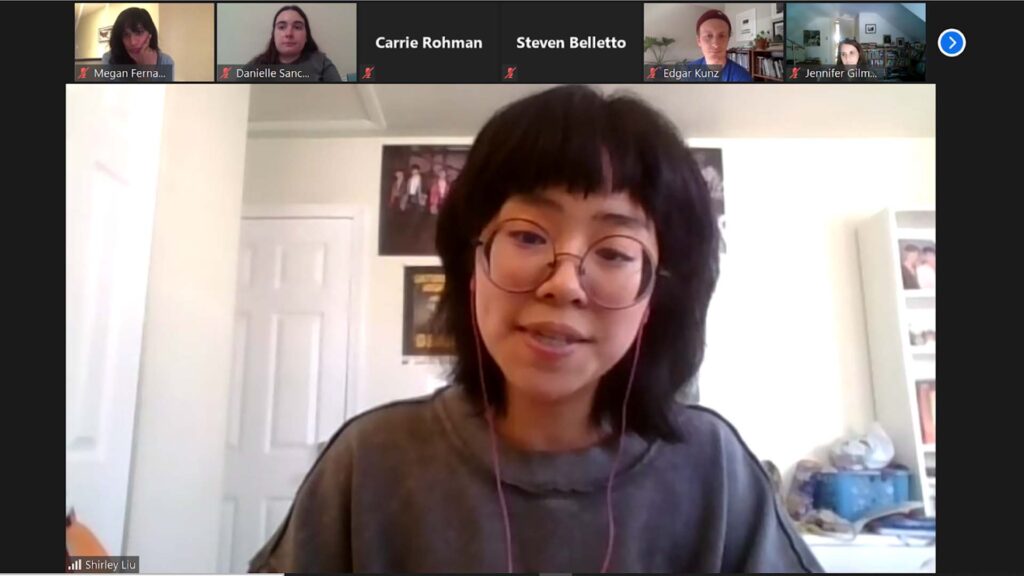 Fatimata Cham ’23 also was recognized for her poem “Mr. President.” Unlike Liu, Cham has not only written poetry but also read it in notable places, like the United Nations.

“I love writing poetry to express my feelings, comprehend the world around me, and also spread awareness about the issues I see happening around the world,” says Cham. “This poem in particular addresses the importance of community work regardless of who’s in office. The importance of uplifting those around me and my experience being a Black child in America.”

Here are the poems:

white, chantilly and ivory and eggshell.

I choose panna cotta because I have a sweet tooth

and because it is two shades lighter than my palms.

I don’t remember when the sun became

something to avoid, just that I would scrub

the dirt in my complexion with steel

wool until my skin turned raw and

bloody. There are 293 swatches in

I am seven when I tell my mom to stop

speaking Chinese to me. I was in love with a boy and his

eggshell skin. There are 267 swatches in

I am sixteen when I start learning Chinese

again. The syllables set my tongue on fire.

Mandarin is pronounced huang. I scour the

store for a swatch with the same name.

I am very pleased to

My father always taught me to

Speak truth even when

Your life’s on the line

So today I took pen to paper

And wrote my truth

I know all too well

The smell of air pollution and

And the harrowing noises of

The difference a dollar makes

The phrases go back to your country

And take that hideous scarf off of your head

How happiness is a distant memory

My happiness has never stemmed from this democracy

Because only right here

Can I die while sleeping, jogging, playing in a park, in my car, in a classroom, at a protest, in my home

We have broken the glass ceiling

But how far will that take me

We have gotten you to office

The Black women in Georgia

We Black women across the nation

Seems polarized too many

I a young Black child

That this has always been America

Has never been split into two

But rather a harrowing image of reality

We learned this past summer 17 more ways

You can die while being black in America

We learned how complacency, and lack of accountability can heighten this harrowing image

Will you plague us with your empty promises too

Will you fill your cabinet with diversity

To portray this image of change

Or will their be action

Because Flint still doesn’t have water

The Middle East is still being disrupted

The Congo is still being exploited

People are still in detention centers

Is the Black agenda at the top of your list

Are we dead dead last again

We speak of light and truth

My light was stolen long ago

As I child I found myself placing

My hand across my chest

Singing to a flag

What it all meant

It is not amiss to me

That the lawn you walk on

The halls you walk through

We’re crafted by the hands

I don’t need your words to reassure me

Because it’s the community I wear on my heart

That has always gotten my back

My liberation will not come your presidency

I am rendered speechless

Because although it’s not another 4 years

I don’t have much faith

The only faith and courage I rely on

So I will end by saying

As we part ways

I hope you find a cure to

The malignant tumor that is growing

And know that it lies not in the policies or politics

You have worked on before

It lies in the hearts of communities