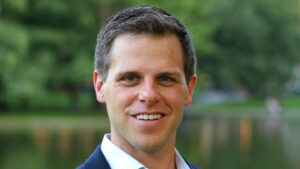 A proud product of rural America, Joe Goodwill ’04 has always been frustrated that large, wealthy communities have advanced resources at their disposal to deliver clean drinking water, whereas smaller towns, like the one he grew up in, do not.

“It’s emotional for me,” says Goodwill, assistant professor of civil and environmental engineering at University of Rhode Island, who grew up in Camden, N.Y., a small village north of Syracuse.

He turned his passion for potable water into a National Science Foundation grant application to support his research into an advanced oxidation process that purifies water using just iron and sulfur, readily available and inexpensive resources.

Just recently, Goodwill got word that he has received a CAREER grant, the NSF’s most prestigious award for early career faculty. The award recognizes faculty who have the potential to serve as academic role models in research and education, and to lead advances in the mission of their department or organization.

“Yeah, it was big news,” he says. “I’ve been kind of riding a little bit of a high on it the past few days.”

“It works well,” he says. “But the infrastructure that’s required to execute advanced oxidation typically is relatively complex and expensive in a way that is oftentimes out of reach for rural areas and, more broadly, in developing economies globally.”

In his NSF proposal, Goodwill describes a novel way to remove water pollutants using an advanced oxidation process that is fundamentally based on the combination of a form of iron and a form of sulfur.

“What’s nice about it is that it’s operationally quite simple,” he says, needing just two easily procured ingredients that are shelf stable and can be added together as required. “My hope is that this completed research will enable small systems in rural America and globally to have water systems as effective as those in bigger cities.”

Successful completion of this project will not only improve water quality in rural areas but also advance science education. Goodwill plans to demonstrate his process in middle school science programs through a partnership with the Rhode Island 4-H organization.

“I’m very proud of my upbringing. I had a fantastic childhood and wouldn’t change it for anything,” he says. “But it definitely gave me a different perspective.”

Lafayette provided me with fundamental science and engineering knowledge, but it also made me an effective and persuasive writer and speaker

His interest in water treatment began at Lafayette, where he learned and developed an appreciation for the fundamentals of civil and environmental engineering.

He was drawn to Lafayette because it provided a rare opportunity to play football and get involved in a solid engineering program.

“I wanted a good school with a decent football program and also engineering,” Goodwill says. “When you start to draw that Venn diagram, it gets kind of small and narrow when you search for a college like Lafayette. There are only a few schools like it.”

Lafayette’s tradition of bringing together engineering and the liberal arts has helped him in his professional life and specifically on the NSF proposal.

“I have come to learn in my own role as a professor that having a great idea is one thing,” Goodwill says. “But that’s inadequate to do things like pursue an NSF CAREER Award. You have to articulate that idea in a compelling way. Lafayette provided me with fundamental science and engineering knowledge, but it also made me an effective and persuasive writer and speaker.”

“They helped a pretty unfocused kid find himself,” Goodwill says. “There’s no way this type of achievement happens without people like this in your life.”

He thinks about Lafayette often at University of Rhode Island, where he teaches introduction to engineering, a course similar to what’s offered at Lafayette, and a graduate-level elective on water quality and treatment.

“I’m forever grateful to Lafayette and the professors who inspired me,” Goodwill says. “I’m attempting to pay it back to other students in my role at the University of Rhode Island.”

Alumni share how they are making a positive impact