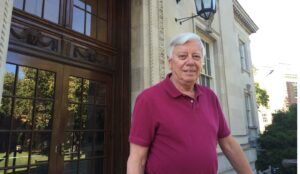 Robert B. and Helen S. Meyner Professor of Government and Public Service, John Kincaid, spoke with WFMZ-TV Channel 69 about how the outcome of the 2020 census will affect Pennsylvania moving forward.

The state will lose one House seat and, along with it, one electoral vote. The General Assembly and the governor are expected to come to an agreement on how it’s decided which seat will be eliminated, but Kincaid doesn’t think that will be so easy.

“We have nine Democrats and nine Republicans in the House. It’s evenly divided. So, which seat do you get rid of?” Kincaid asks, before adding he expects the redistricting process in the state will “be a bloodbath.”

WFMZ also reached out to Kincaid to ask for his opinion about President Biden’s American Families Plan, which Biden made a pitch for during his first address to Congress this week.

“I think what Biden will try to do is rebuild trust in the federal government, particularly by pressing a big government agenda,” Kincaid said.

Political scientist lays out historical context for impeachment
Categorized in: & Government Relations, Faculty and Staff, Government and Law, In the Media, News and Features