A college is not just a place for education. It is also a platform for local economic activity. The presence of Lafayette College in the city of Easton has created an environment that draws in locals from the area, brings in guests from out of town, channels government spending to the city, and drives the size of the local workforce as well as connections between the College and local businesses.

A 2019 report published by AICUP (the Association of Independent Colleges and Universities in Pennsylvania) found that the state’s 90-plus independent nonprofit schools create or sustain almost 200,000 jobs in Pennsylvania every year. In addition, they generate an annual economic impact of more than $24 billion for the state’s economy (with Lafayette College generating around $200 million in annual economic activity).

The College and the city of Easton enjoy a strong, symbiotic relationship supported by state policymakers. Recognizing that the College and the city share values and goals that support accessibility, safety, and multimodal transportation options has led to Lafayette College and the city to apply for and receive more than $15 million in state grant funding since 2004. This funding has been used on numerous projects that have included redevelopment, revitalization, and safety features on the streets surrounding campus—ensuring that Lafayette is serving the city of Easton and beyond and that each project is helping to physically connect campus with the surrounding community.

RACP projects are primarily economic development initiatives, authorized in the Redevelopment Assistance section of the Capital Budget Itemization Act, that have a regional or multi-jurisdictional impact, and generate substantial increases or maintain current levels of employment, tax revenues, or other measures of economic activity.

The $9 million RACP grant, awarded in 2004 with ground broken in 2007, included the acquisition of the Simon Silk Mill by the Easton Redevelopment Authority, planning for the Karl Stirner Arts Trail, and improvements to the area now known as the Williams Arts Campus. This project catalyzed millions of dollars in redevelopment along the Bushkill, from 13th Street to downtown Easton. (Since the work enabled by the grant was complete, renovations to the Silk Mill properties, the construction of Buck Hall, and the Ahart Family Arts Plaza, and renovations to 248 North Third Street and surrounding buildings has been completed).

Impact on Lafayette: The project allowed for expansion from College Hill into the Bushkill Corridor, connectivity between the College and the Bushkill Corridor, an expanded outdoor area for students, shared community space, and an overall area that serves its community more effectively and physically connects the Williams Arts campus to downtown Easton.

Impact on Easton: “These changes have really made the area welcoming and have increased the quality of life for our residents,” says Mayor Sal Panto, Jr. “People have been using the Bushkill corridor more and more. Our goal is to get the city back to pre-urban renewal days when the population was at 35,000, and the partnership with Lafayette is vital. Students want to come to both a nice college and a nice city, and parents want to send their kids to college in a nice city. The cooperative effort and the partnership created between the city and the College have created all good things for the entire neighborhood, not just for the college.”

The $1.1 million grant awarded in September 2016 allowed for Phase I to be completed in 2017 and Phase II to be completed in 2019. Funding through the MTF is made possible by motor fuel tax funds that are earmarked for annual grants to municipalities to address safety improvements and to expand opportunities to use alternate transportation modes such as bicycling. 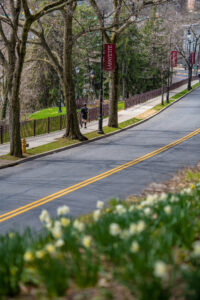 The Travelways Improvement Plan made pedestrian areas around campus much safer.

The plan provided safer and code-compliant pedestrian crossings, a new median at High Street, and sidewalk improvements and enhanced crosswalks for students crossing this busy roadway through campus. Similar upgrades were added at the intersection of McCartney and March Streets, and along North Third Street at the Williams Arts Campus. Traffic calming features included the narrowing of roadways and a widened median.

Impact on Lafayette: The project upgraded and improved safety and accessibility in key gateways, corridors, and intersections that connect the main campus, the Williams Arts Campus, and Easton’s business district.

Impact on Easton: The project offers greater access to Lafayette’s campus for area residents so they can enjoy the benefits of the campus. “When students are going from the main campus to Downtown Easton, these safety improvements have also helped create a bridge into the center of town. This is mutually beneficial for both Lafayette and for the city itself,” says State Rep. Robert Freeman, D-Northampton. “These changes respected the integrity of the surrounding neighborhoods, enhanced attractiveness for the city, and allowed for easier accessibility.”

This $1.5 million grant awarded in 2017 is focused on outdoor improvements that will allow pedestrians and bicyclists to travel quickly and safely between the main campus and both the Williams Arts Campus and downtown Easton. The project will fund improved safety for pedestrian and bicycle travel, increased accessibility, and promote walking and biking between campus and the downtown business district. Three areas will be targeted for transportation improvements. The historic stairs that connect campus to Downtown will transition to a winding ramp with benches and bike racks. A path from this ramp will connect to the William E. Simon Center. 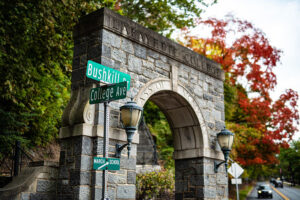 The historic steps from downtown Easton will be renovated, leading to improved safety and accessibility for pedestrian and bicycle travel.

Impact on Lafayette and Easton: “Back in 2015, I began to explore the escarpment above College Avenue and found trails that lead you off of campus and back onto campus. I remember pitching the idea to the architect on campus and saying there was some real potential here for a trail network that would provide access down to the arts trail, but also would be a great connection to the neighborhood, and to those who wanted to explore parts of the campus,” recalls State Rep. Robert Freeman, D-Northampton. “A number of engineering students were also involved in a study, and it became a great way of linking access to the Bushkill Creek corridor, where Lafayette really started expanding to. There’s a great trail network waiting to be explored.”

$1.4 million, originally awarded in 2016, with another $1 million added on for projects related to pedestrian safety.

Impact on Easton: “The whole area has been transformed by the pedestrian and bicycle improvements, and the street lights. These upgrades and this walkable area—which we’ve never had—make people feel safer about getting around the city. On a weekend morning, I can literally watch hundreds of students walk into the downtown for breakfast or the Farmers Market. And that, to me, is just fantastic,” says Mayor Sal Panto, Jr.

The study examined the Bushkill Drive entrance to campus from 13th Street, to the intersection with Pierce St., and then to Sullivan Lane and the Williams Arts Campus on North Third Street. The College and the City is studying the best ways to connect the Karl Stirner Arts trail. The project looked at all aspects of the Bushkill Street approach to the College as it relates to the Silk Mill, the Arts Trail, the Bushkill, the College’s development at Bushkill and Pierce Streets, and the City of Easton’s interest in properties along that route. 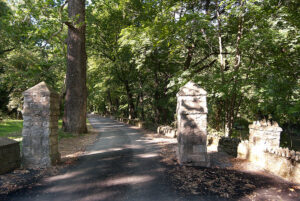 Impact on Lafayette: In addition to the study by the College, students from the Lafayette College Technology Clinic, a two-semester course in which teams of students work together to develop imaginative solutions to real-world problems, was charged with the task of examining the functionality of this specific area. The group presented their findings and recommendations in a final report submitted in 2017.

The $1 million awarded by the state in January 2021—which the College will match—received support from Gov. Tom Wolf, State Sen. Lisa Boscola, and State Rep. Robert Freeman.

The college is renovating the 19th-century Rinek Rope Factory. The historic factory complex, which is located past the Public Safety building on Bushkill Drive, will be transformed into a new College-operated hub that includes maker space, multi-use meeting spaces, a student-led EMS station, and a composting facility.

Impact on Lafayette: The College plans to support programs that engage and benefit the community, such as student collaborations with local businesses. The Rinek project and other improvements at neighboring Hummel Lumber and Easton Iron and Metal build on previous city and College investments in the Bushkill Corridor area. 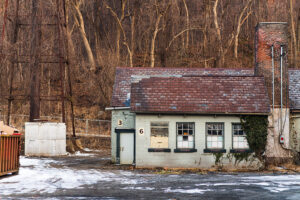 Impact on Easton: “Investing State dollars in Easton and Lafayette College is always a win/win/win. The City wins, the College wins and the State wins. The School’s partnership with the City is a wonderful model and is the envy of many communities that are home to colleges and universities,” says Sen. Lisa Boscola. “Lafayette finds projects that bolster what the City is trying to do, improve the community around them all the while responsibly growing the footprint of the College. I look forward to touring the facility when it is complete.”