Completing a thesis is a serious, ambitious endeavor that many Lafayette seniors complete each year. It’s an opportunity for students to investigate a topic and demonstrate ingenuity and dedication that helps to celebrate the culmination of their college career.

These yearlong projects occur across departments in various disciplines and require students to complete independent research supervised by a departmental faculty member and judged by a thesis committee composed of the faculty supervisor, at least one other member of the department, and one faculty member from outside the department.

Here, three seniors completing a government and law honors thesis share how their project gave them an opportunity to think outside the box, pursue topics that were personal or timely, and to work closely with mentors who have inspired them during their time at Lafayette.

How did you choose your topic?

“I am measuring civic engagement by matching campaign donations to residences in Easton. The project is really special to me because my family is originally from Easton, and I’ve spent a lot of time working with renters and owners in the West Ward of Easton. I came up with the idea while working on an economic development project for the West Ward of Easton through Lafayette’s Technology Clinic. During that project, I noticed it was really hard to engage renters and that both normative scholarship and community stakeholders and government tend to view renters as less active in their communities.” 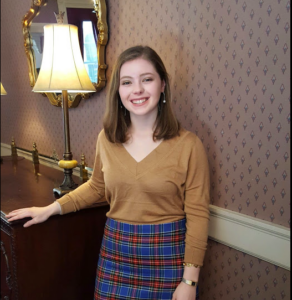 How have you gone about your research?

“I wanted to learn more by first asking what kinds of participation renters and homeowners engage in, and what the disparities were, before critically assessing why renters participate less compared to homeowners. Campaign donations are really good datasets because they haven’t been explored at all with this question and can be matched easily to existing addresses in Easton. I expect that homeowners will donate more but that there will be other third factors, such as income, that may be better indicators for participation. These questions are important since renters are a diverse and increasingly populous group in the United States; the implication would be that they are underrepresented in local and national government and aren’t having their voices heard.”

Who at Lafayette has influenced your work?

“There have definitely been a few important mentors who have inspired me to write my thesis. First is my main adviser, Professor Andrew Clarke. I remember pitching the idea to him my junior year and being so nervous that he wouldn’t be interested; I was so excited when he officially took my project on. Since then, he has helped me work through so many problems, from writer’s block to data mishaps. I’m the kind of person who likes to be super organized and have set deadlines to make sure I stay on track. Professor Clarke is like that too, and was so good about pushing me over the summer and throughout the fall semester to get as much done as possible so that I wouldn’t be overwhelmed in the spring. I would also add that working with data isn’t my biggest strength, so his expertise and advice have been absolutely essential.

I also want to mention Professor Gladstone Hutchinson and Lawrence Malinconico, who were my mentors on Technology Clinic. They were the ones who initially encouraged me to think critically about what it means for communities to have high renter populations, like Easton’s West Ward. I would have never discovered my passion for this topic if they hadn’t recognized my potential and selected me for the team. Working on that project under their mentorship was instrumental to my academic growth and taught me how to be confident in my voice.”

*Steffaro is an International Affairs and Russian & Eastern European Studies, and her honors work is a joint thesis between those two programs.

How did you choose your topic?
“I have always had a fascination with Russian culture as well as Russian Orthodox Christianity, as my family is very active in our local Russian church community. Throughout my studies at Lafayette, I began cultivating my academic interest in this region of the world. I studied abroad last spring in St. Petersburg, where I took intensive language classes. I have also taken part in many Russian history classes here at Lafayette, which led to my double major in IA and REES. 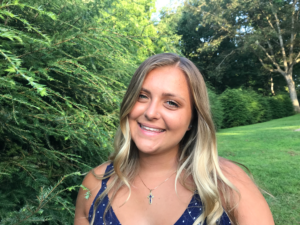 When I was beginning to explore my interests for an honors thesis, I knew I wanted to focus on the relationship between the Russian Orthodox Church and Putin’s administration, as scholars have speculated that this relationship is corrupt and infringes upon separation of church and state. Through more reading, I came across an interesting organization that was created by Vladimir Putin in 2007, called the Russian World Foundation. The ‘Russian World’ is a concept that imagines Russia reuniting with Ukraine and Belarus, and has been the basis of Putin’s soft power initiatives. The foundation claims to spread the Russian language and encourage repatriation of the diaspora with the aid of the Russian Orthodox Church.”

What have you found through your research?

“My research has concluded that the Russian World Foundation no longer functions, as its centers around the world have been closed down. Additionally, while the ROC claims that it helps to further the initiatives of the RWF, each local church community I spoke to in the United States was unaware of the existence of the RWF. Thus, my research concludes that the ROC, RWF, and Putin portray a deceptive narrative regarding their relationship and soft power initiatives. I suggest further research be conducted in order to support my sub-hypothesis that the elites of the church and Russian government are funneling the foundation’s resources into their own interests.”

Who at Lafayette has influenced your work?

“Professor Joshua Sanborn has been such a supportive adviser to me throughout this entire process. His background in Russian history has been an indispensable resource to this project, as well. Additionally, Professor Hannah Stewart Gambino and Professor Brett Hendrickson have provided me with unique points of view from their respective departments that have added invaluable suggestions for the continuation of my project. It has meant the world to me to have been so lucky to work with such amazing professors who have supported me throughout this entire journey. My research has shifted since the beginning of the process, but my advisers have always had the confidence in me that I can adapt and continue to succeed. Writing an honors thesis has been such a challenging and rewarding experience, and it would not have been possible without the support of my professors.”

Carly Jones ’21
Topic: The Rise in Anti-abortion Laws & Their Connection with the Death Penalty

How did you choose your topic?

“My thesis topic is about the rise in anti-abortion access laws and those that, more specifically, punish abortion with the death penalty. I was interested in looking at this issue because both abortion and death penalty laws are highly politicized. I was interested in studying ‘pro-life’ ideologies because they clearly infringe upon women’s rights. I am using prior Supreme Court decisions as well as psychological and philosophical literature that tries to solve the problem of how to protect the right to abortion while abolishing the death penalty in a logically and morally consistent way. The Supreme Court has not yet needed to come up with a manner that treats the two issues consistently, however if laws that punish abortion with death come to the Court, there will need to be a more consistent standard that properly protects individual liberties of women. 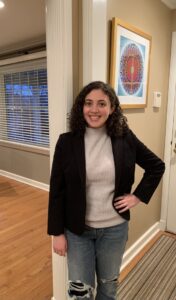 I decided on this topic after taking a Constitutional Law class in the Government & Law Department with Professor Bruce Murphy, who is also my thesis adviser. I am interested in the way that the makeup of the Supreme Court changes the way decisions are made that impact our entire country, so I thought taking this issue from a law, rather than a public policy perspective, would be interesting. I expect that by concentrating on Court precedent that focuses on ‘human dignity,’ I will be able to create a standard that both protects the right to abortion and abolishes the death penalty. My current title is ‘On Being Pro-Life and Pro-Death: A Study of Pro-Death Penalty and Anti-Abortion Jurisprudence.’”

Who at Lafayette has influenced your work?
“Professor Murphy in the Government and Law Department is my main thesis adviser. His class on Liberty in U.S. Law and Politics was what got me interested in my topic in the first place. He has been supportive throughout the entire process and has encouraged me to explore new topics and ideas as they have come up. His classes and his advising have taught me how to look at Supreme Court cases with a more critical lens, which has helped me throughout the process. I’m a double major in government & law and psychology, and Professor John Shaw in the Psychology Department is on my committee and has provided an interesting psychological perspective to my topic.”