Patricia Donahue, retired English professor with storied Lafayette career, reflects on her emotional connection with the College as campus plaza is dedicated in her name Twitter

Concrete, asphalt, and brick. These were the simple, unassuming materials that originally came together to create the walking path sitting just outside Lafayette’s South College first-year residence hall. But in summer 2019, the space received a much-needed facelift thanks to the generosity of  Patricia Donahue—a now-retired professor of English whose illustrious career left behind an indelible legacy at the College—and her husband,  Michael Garst—retired senior vice president of chemical sciences at Allergan and current partner at three pharmaceutical companies.

Now replete with charming pavers, a bluestone courtyard with seating, and lush landscaping, Donahue-Garst Plaza has transformed into a private, peaceful retreat where students can go to study, collaborate, or simply relish the outdoors. The project, Donahue says—which was officially dedicated in the couple’s name on June 4—was nothing short of a labor of love.

“Lafayette has been a major part of our lives, directly and indirectly,” she says. “There’s considerable pleasure in creating opportunities for students that will enhance and energize their academic and personal lives.” 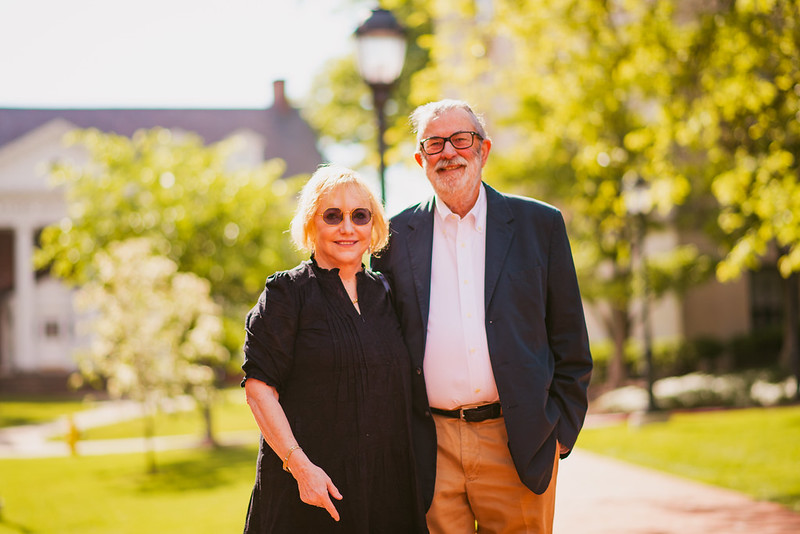 Patricia Donahue, professor of English emerita, and her husband, Michael Garst, established the Donahue-Garst Plaza at South College through a generous gift.

Nestled in the plaza is a plaque inscribed with these intimate words about Donahue’s emotional connection to the College—a connection that continues to move her even now in retirement: “I have loved Lafayette because I have loved my students.”

“Lafayette is special to me because of the many opportunities it afforded for professional development and growth, because of its community, which I enjoyed being a part of, but mainly because of the many students I taught over the years,” she says. “They are special: They’re smart, aware, committed, lively, challenging, and fun. I taught them, but they also taught me.”

Donahue’s long and storied tenure at the College made an equally sizable impact on not only the students she taught and the colleagues she collaborated with, but also the Lafayette institution as a whole and the future generations that would come to be a part of it.

After joining Lafayette’s Department of English as an assistant professor in 1985, Donahue—who received her Ph.D. from University of California, Irvine—rose to associate professor in 1992 and professor in 2004. In addition to teaching compelling courses such as Psychoanalysis and Literature, and Trapped in a Golden (C)age: Representations of Women in the English Renaissance, Donahue helped design and teach the first iteration of the First-Year Seminar, and create and implement a writing-across-the-curriculum program. In 1986, she also established the College Writing Program, which is nationally recognized for its excellence and for which she served as director until 2008.

A renowned and highly regarded scholar in the field of writing studies, Donahue has had her work published in various academic journals. She co-authored The Elements (and Pleasures) of Difficulty, and co-edited Reclaiming Pedagogy: The Rhetoric of the Classroom and Local Histories: Reading the Archives of Composition. Donahue was also an editor of Reader, the only scholarly journal published at Lafayette. She served as both head and associate head of the College’s Department of English, participated in a variety of Lafayette-wide committees, and helped spearhead the establishment of the Center for the Integration of Teaching, Learning, and Scholarship. Her professional contributions and achievements have been widely celebrated: She was chosen as a Carnegie Scholar, and she received the Marquis Distinguished Teaching Award in 1995, James P. Crawford Award in 2005, Carl R. and Ingeborg Beidleman Research Award in 2008, and Christian R. and Mary F. Lindback Award for Distinguished Teaching in 2016.

When all was said and done, Donahue says, what ultimately drove her forward was her unyielding commitment to the success of her students:

“Robert Chase [who served as head of Lafayette’s Department of Biology, dean of the College, provost, and dean of the faculty before retiring as the Charles A. Dana Professor of Biology] once told me that among the wonderful aspects of college teaching is working with young people during one of the best periods of their lives, when everything seems possible. And I always took that to heart.”

Patricia Donahue and Michael Garst were honored for their generosity on June 4 during the dedication of Donahue-Garst Plaza. View the full album of photos.