"You know, it’s awesome to see the million dollars, but that’s just icing on the cake. The learning experience that we get from investing this money is priceless" Twitter

What started with $3,000 in seed money 75 years ago has grown to more than $1 million under the stewardship of the Lafayette College Investment Club.

“We were definitely ecstatic” when the portfolio crossed the $1 million mark earlier this semester, says Noah Grossman ’21 (economics), who shares the club’s co-presidency with Alec Cwienkala ’21 (economics). 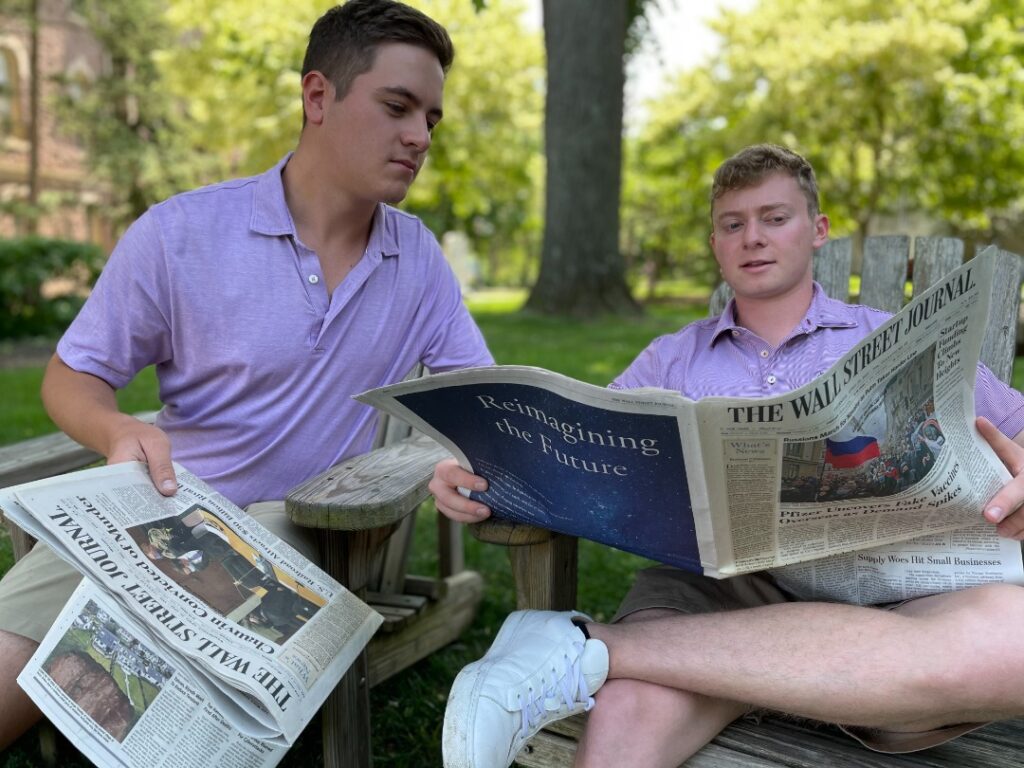 “It’s such a rich history, so reaching a million was a really big milestone,” Grossman adds. “We’ve been able to have such a large impact while we’ve been here in terms of pitching our own stocks and encouraging students to pitch stocks.”

The oldest student-run investment club in the United States dates back to World War II, when the Army assigned Maj. John Tarbell to give investment tips to GIs returning home.

A finance professor before the war, Tarbell helped many of the Depression-era soldiers get past their unease about making investments. Grateful for the advice, several veterans gave Tarbell $3,000 to help start an investment club at Lafayette, where he taught after his military service.

Now with 150 members and a portfolio of 60 stocks, including Amazon, Apple, Caterpillar, IBM, and Microsoft, the club meets every Friday to get market updates and pitch stocks. Members are required to make well-researched, professional presentations about which stocks to add to the portfolio and consider companies that value diversity and environmental sustainability. Investment decisions are made by majority vote. Michael Kelly, associate professor of economics, the club’s faculty adviser, executes the trades through Merrill Lynch.

“Prof. Kelly is also there to advise us when a stock isn’t performing so well,” Cwienkala says. “He wants to make sure the club’s doing well, and he’s going to make sure that we’re learning the fundamentals of how the markets work.”

One of the best investment decisions made this academic year was Domino’s Pizza, which has performed surprising well, says Grossman, who will start work for Moody’s Investors Service this summer.

The club’s portfolio is part of the College’s endowment, but the club uses some dividends to buy pizza and soft drinks, and support educational trips to Wall Street.

“We’re really focused on the long term,” says Cwienkala, who’s headed to Cambridge Associates to work as an investment analyst.

“We’re not so focused on how a stock is going to perform this week or next week, but what it’s going to look like in the long run,” he says. “That’s our big message when we’re talking to first-year students about pitching stocks. We want you to pick stocks that you believe will still be in the portfolio after you’re out of Lafayette.”

The diversity of the membership brings different perspectives as the club considers its investment decisions.

“There’s definitely a diversity in majors,” Grossman says. “There are a good amount of economics and finance majors, but also you have some psychology, engineering, and history majors. And this year, we’ve put more of an emphasis on diversity and inclusion in the club, and encouraged all students to get involved and take an active part in the club.”

Cwienkala says the diversity of interests and backgrounds is reflected in a portfolio that represents an array of companies ranging from those that deliver dependable returns to green tech firms and renewable energy startups.

“The club provides a unique opportunity where students are investing real money,” Grossman says. “Especially now, during a time when you have a lot of inexperienced investors placing risky trades, we’re providing a place that emphasizes long-term investments and the fundamentals of the stock market.”

Grossman and Cwienkala didn’t pause for even a second when asked what they’d say to Prof. Tarbell if they had the opportunity to pass along a fiduciary thank you.

“We’d thank him for providing such a rich educational experience for us,” Cwienkala says. “It’s a legacy that we hope continues and lives on. You know, it’s awesome to see the million dollars, but that’s just icing on the cake. The learning experience that we get from investing this money is priceless.”

“He really blessed Lafayette with that $3,000,” Grossman says.