After some 17 years underground, billions of Brood X cicadas have emerged across the northeastern U.S., announcing their arrival with red bulbous eyes and a deafening chorus of shrill chirps.

Their high-pitched buzzing and crunchy carcasses may be an irritant to modern human senses, but ancient writers found beauty and inspiration in the cicadas’ dramatic emergence from the earth, shedding their exoskeletons and creating their distinctive music.

“Weave to me a longed-for tune,” a “merry chirp,” Meleager of Gadara, a first-century B.C. Syrian-Greek poet, implores the cicada.

“Ancient Greek and Roman authors found much to admire about cicadas,” says Jason Simms, an instructor for foreign languages and literatures and manager of research and high-performance computing in Information Technology Services. 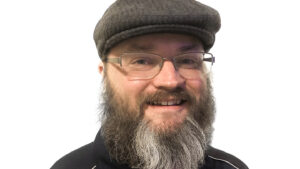 “First, and perhaps most obvious, is that cicadas represent death and rebirth, or even immortality,” he says. “This is for a number of reasons, most apparently because they emerge from the ground after several years, and to Greeks and Romans, that represented the underworld, the realm of Hades.”

Cicadas shed their skin as well, which likewise explicitly represents transformation and rebirth.

“It is perhaps no surprise, then, that the goddess Eos transforms her lover, Tithonus, for whom she wished eternal life, into a cicada,” Simms says. “In addition, their amorous activities once they emerge symbolically connected them to notions of love. Moreover, Greeks and Romans believed that cicadas did not require food, subsisting on little more than dew and air, which further gave false credence to notions of immortality.”

Plato writes that “they neither hunger, nor thirst, but from the hour of their birth are always singing, and never eating or drinking.” (trans. Benjamin Jowett).

Perhaps unlike many modern humans, ancient Greeks and Romans seemed to find the call of the cicada pleasant, even musical. Aristophanes writes that “in love with sun/ cicadas sing/ through noonday heat/ their sharp-toned song/ divinely sweet.” (trans. Ian Johnston).

Even Homer calls their song “lily-like” (trans. Samuel Butler). An unknown Greek poet writes that cicadas “filled all the wilderness with music.”

“They were also affiliated with the Muses and even Apollo, divinities closely associated with music,” he adds. “Virgil, however, refers to cicadas as querulae, which means ‘complaining’ or ‘making a mournful sound,’ indicating that perhaps not everyone appreciated their sound.”

Like some contemporary foodies who have created such delicacies as cicada tacos and cicada cookies, ancient diners also enjoyed eating both the nymph and adult stages of the bug.

“And we also know that they were even said to be kept as pets for their short lives,” Simms says.

What happened in the news? How is that made? How can I learn more about that, and more importantly, who do I ask?