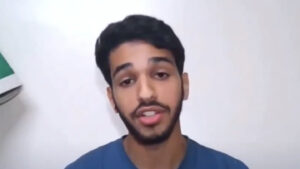 Khalid Al-Motaery ’23 was interviewed on Al Ekhbariya, a satellite TV news network based in Riyadh, Saudi Arabia, about his work on a West Baltimore economic and cultural revitalization project.

Al-Motaery and other students are assisting Gladstone “Fluney” Hutchinson, associate professor of economics and policy studies and founder of Lafayette’s Economic Empowerment and Global Learning Project (EEGLP), who is co-leading a multiyear collaborative co-learning effort aimed at bringing social and economic redress to West Baltimore communities.

This collaboration involves Lafayette faculty and students interacting with diversely experienced West Baltimore stakeholders in developing recommendations to transform communities into places of economic prosperity and community wealth and improve their well-being.

Particular focus will be given to awakening West Baltimore latent assets, including cultural and creative ones, and the community’s deeper and more meaningful engagement with the value and wealth-building dimensions of entrepreneurial capitalism.

Saudi Arabians living in Baltimore brought the project to the attention of Al Ekhbariya. The reporter contacted Al-Motaery because the network’s research concluded that he is the only Saudi worldwide who is involved in a project of this kind, Hutchinson noted.