Chris Baylor ’22 aided Japanese newspapers, TV stations, and general media with interviews with athletes from all over the world in Tokyo Twitter

The Tokyo Olympics ended back in August, but for Chris Baylor ’22, memories of the summer games will last a lifetime.

Baylor, who was born in Japan, spent several weeks serving as a Japanese-English translator at Enoshima Yacht Harbour in Fujisawa City, which hosted sailing competitions. Japanese was one of 11 languages spoken by volunteer interpreters at the games, whose job it was to convey the emotions of both Olympic joy and Olympic heartbreak.

Over 200,000 people originally applied to volunteer at the Tokyo Olympics, which was moved from 2020 to 2021 and then held without spectators—making Baylor’s already-rare experience that much more unique. 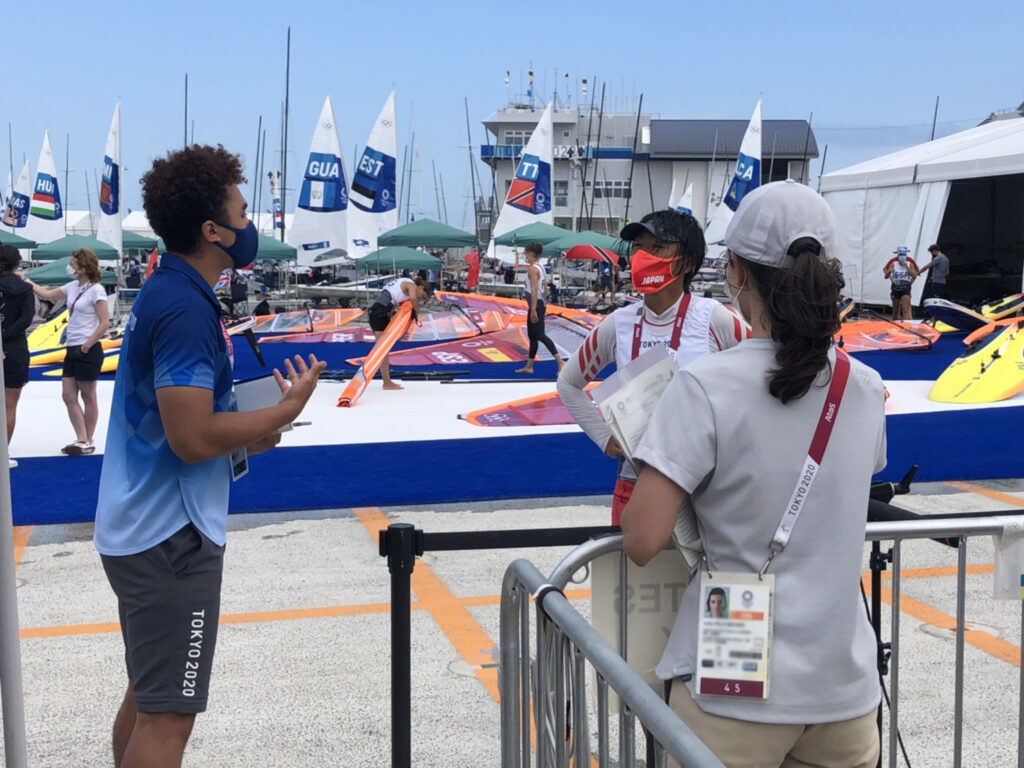 Chris Baylor ’22 (left) works with a crew at the Tokyo Olympics, which were held in Summer 2021 after being postponed for a year.

“As more [COVID-related] restrictions rolled out, it really helped that I was a Japanese national and dual citizen. I actually arrived two months before the Olympics and stayed with my grandparents the entire time, did the mandatory 14-day quarantine, and then I was told that I could pick between the sailing and surfing competition venues. The venue where I volunteered was actually originally built for the 1964 Olympics, so it was huge,” says Baylor, who majors in international affairs and asian studies.

The Tokyo sailing competition included six classes, including four in which both men and women competed. Baylor’s job was to aid the Japanese newspapers, TV stations (including the Olympic Broadcasting Service) and general media with interviews with athletes from all over the world, as well as helping to facilitate conversations between Japanese medical personnel and representatives from the World Sailing Federation (formerly ISAF).

Though it was oftentimes tricky for Baylor to grasp the quick fluency of the conversations, he enjoyed the overall experience of being able to help translate for athletes after they finished their races.

“Most days, there would be five to six races. The athletes would be really tired as they were coming out of the water, and then it was really pretty necessary that they would stop and talk to the media—especially the hosting nation, even though Japan wasn’t really known for sailing and would finish behind other countries like Great Britain, Norway, Spain, and France,” explains Baylor. “I was one of the youngest translators there. The reporters would ask me a question, then I would ask that question to the athletes (in Japanese), and then I would translate their answers back to the reporter (in English).” 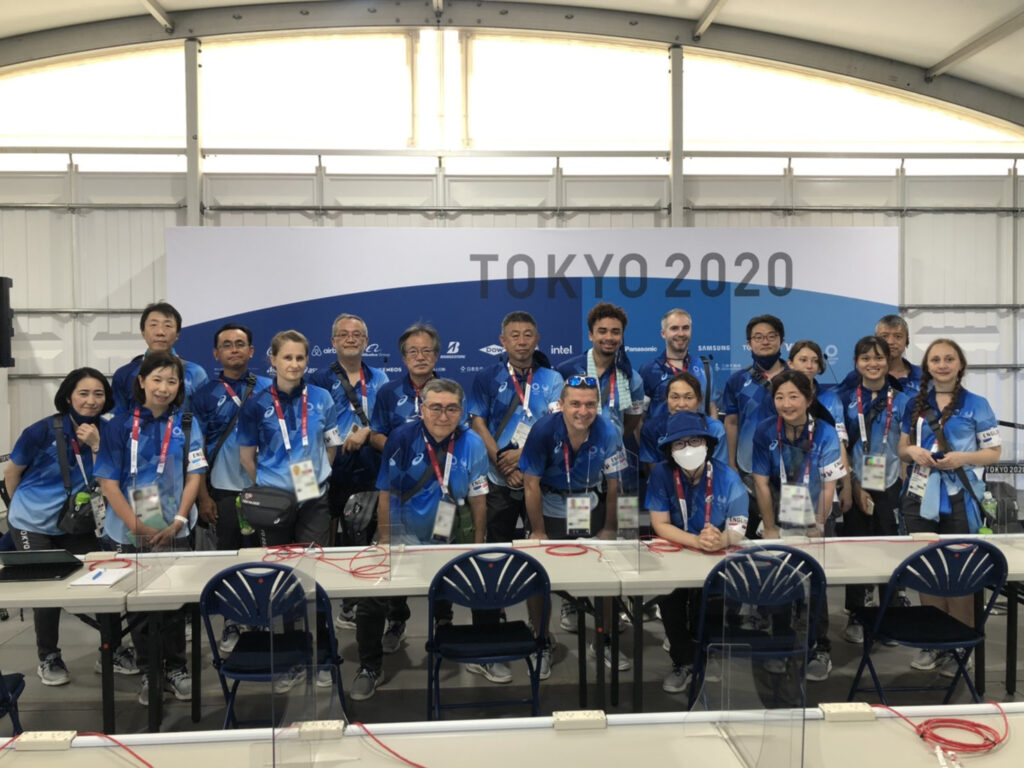 Chris Baylor ’22 (back row, 4th from right) poses with a group of translators at the Tokyo Summer Olympics

A longtime professional translator would be standing by at all times, to both record Baylor’s translations and to help with any fluency issues that would arise. Translations were not expected to be perfect word-for-word turnaround, but instead were meant to provide the quickest back-and-forth exchange of information possible.

“It wasn’t a literal translation,” says Baylor. “Instead, it was really meant to get the feeling across of what you wanted to say. The professional translators would then help fill in the gaps.”

Baylor speaks only Japanese when he’s with his mother, and spoke only Japanese while he lived with his grandparents during his several months in Japan—so much so that he feared his English would be rusty upon his return to the U.S.

“I’m finally getting back into the groove of things,” laughs Baylor.

Asked about his favorite moments at the Olympics, he has two responses. One, he says, was getting to interview Dutch sailor Kiran Badloe about his blue-dyed, arrow-shaped haircut inspired by the Japanese anime character ‘Avatar Aang.’ The other, unsurprisingly, was getting to hold a gold medal.

“I looked at the overall experience as a once-in-a-lifetime thing. It was a great experience. I ended up making good friends there. And even though it was different than originally planned [due to COVID-19], it was a life-changing experience,” says Baylor. “I would never take it for granted.”

Victoria Puglia ’21 is studying at Oxford