The program, called Tied Together, marked an eastern and western conversation with music spanning multiple continents in pieces composed by professionals from the Asia/America New Music Institute.

It served as a homecoming for two musicians. Michael Avitable, flutist, with Hub New Music, grew up in Phillipsburg, N.J. He fondly remembered seeing Williams Center for the Arts signs as a child and knew “that’s where the famous people play.” He told himself that someday he’d be among them.

Umezaki shared how powerful it was for him to receive a handwritten letter from Stockton, mailed to him in Tokyo while he was still in high school. Although Umezaki sought a degree in computer science, Stockton had heard Umezaki play shakuhachi and wrote to explain his passion for the instrument and that Lafayette would be a perfect fit to study both. 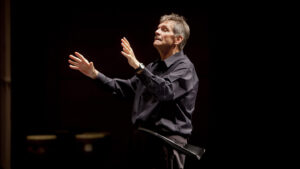 Umezaki’s homecoming was tied in part to the retirement of a mentor. J. Larry Stockton, professor of music, department head, and director of the percussion ensemble, ends a 45-year career this season with his final performances.

That letter worked. “It’s a rare and special gesture that captures who Larry is and how a college like Lafayette works,” said Umezaki, who has gone on to play with Yo-Yo Ma’s distinguished Silk Road Ensemble and earn multiple Grammy awards. 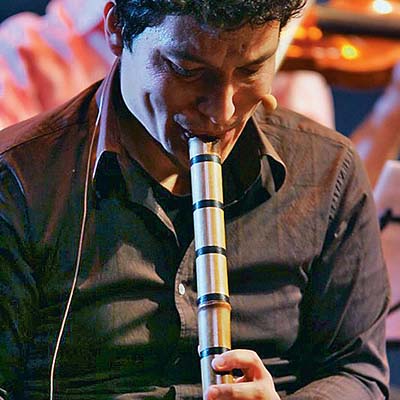 Umezaki then demonstrated his improvisational prowess while playing a traditional Japanese folk song.

Together, Umezaki and Hub New Music then collaborated on pieces where violin and shakuhachi locked in a sonic battle, where the ensemble melded into a gentle whisper, and where a single note became a linear halo for harmony and color.

Williams Center for the Arts

Whether you are a long-time subscriber or a newcomer, we enthusiastically invite you to enjoy our distinctive performance series, gallery events, and concerts by the Lafayette College Department of Music