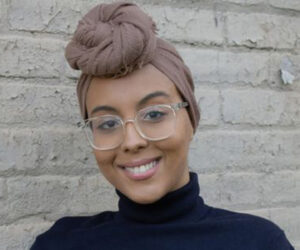 Imane Halal ’23 wrote an op-ed for the Morning Call about life as a Muslim American following the Sept. 11 attacks. Halal, a women’s, gender, and sexuality studies major with a minor in anthropology and sociology, shares how although she is not old enough to remember the events of Sept. 11, the aftermath has impacted her and others of her generation.

She writes: “What does it mean that the subset of the U.S. population most likely to still suffer daily trauma from the aftermath of Sept. 11th is also the group least likely to have been alive for the attacks themselves? Like my fellow Gen Z cohort born in September 2001, the first four years of my life serve as a veritable timeline of the worst precedents of this ‘war on terror,’ seemingly every new month of life bringing with it new imperial ventures that still constrain the political system I’ve been born into.

“We can work alongside our elders and youth to dismantle the policies and systems that have harmed far too many people for far too long, to put our communities’ safety, health and well-being at the center of our policies.”

Categorized in: Anthropology and Sociology, Class of 2023, In the Media, Students, Women’s and Gender Studies