Since July, when he joined Lafayette as the assistant director of intercultural development for gender and sexuality programs, Thomas Lee has been taking a more holistic approach to creating inclusion and equity across campus. While he recognized early on that the role was very student and programmatically focused, he set out to connect with faculty and staff across every area of campus by scheduling in-person meetings—taking an important collaborative step toward one day making Lafayette one of the country’s most well-known LGBTQIA+-friendly undergraduate institutions.

Lee also helped to revamp underutilized space in Farinon 124, which houses the Gender and Sexuality Resource Center (GSRC) and provides a welcoming space for individual students and student organizations. 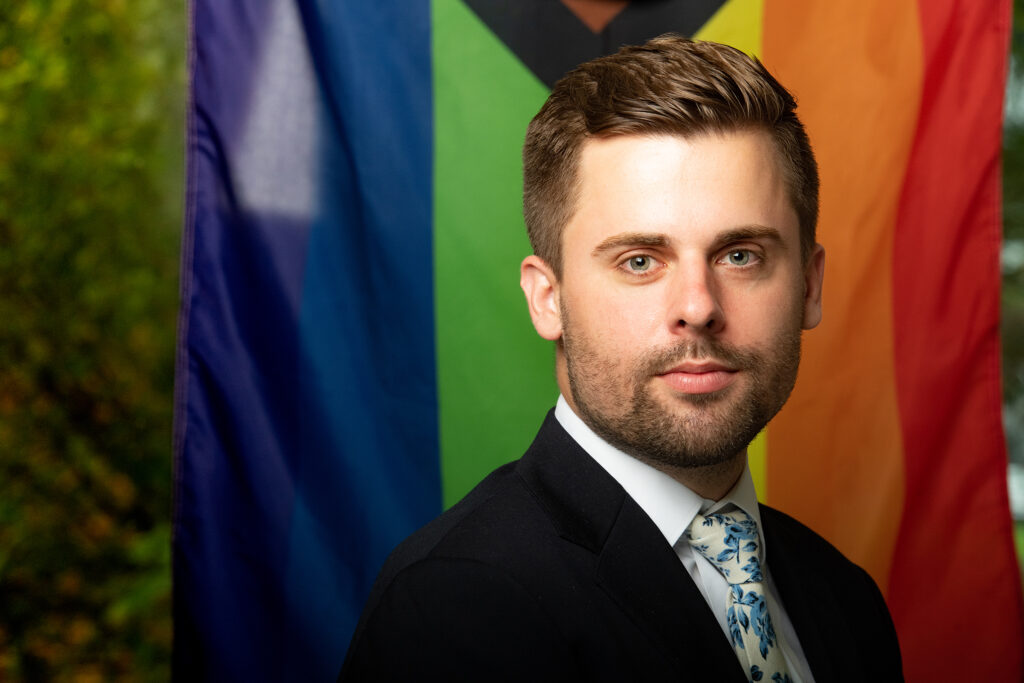 Prior to his arrival at Lafayette, Lee served as an academic program administrator at the Boston University School of Public Health, where he was also co-chair of the Department of Global Health Diversity, Equity, Inclusion, and Justice (DEIJ) Committee. His background helped him make the leap of faith to start fresh in a new role where LGBTQIA+ resources are the primary focus—and to set goals for the future.

Here’s a chance to get to know Lee a little better, and find out what Intercultural Development has in store for LGBTQIA+ History Month:

On the impact of sexual orientation and gender identity

“We all carry these intersectional identities. We might have students or even faculty and staff who are queer, but they’re also a math professor, or they’re also an employee. And it’s not something that you can just turn off right at the end of LGBTQIA+ History Month. It impacts everything you do. It’s important that we continue to integrate these topics elsewhere throughout the campus and our programming and everything we do. But it needs to be matched with policy and procedure at the institutional level that equally demonstrates our commitment.”

“I would love for people who are willing to do this work with me to step forward, introduce themselves, and then for people to take initiatives to create change in their own departments. I’m happy to facilitate that and advise it and share best practices, but it’s going to be a lot more meaningful when people take that self-direction to create change where they are.” 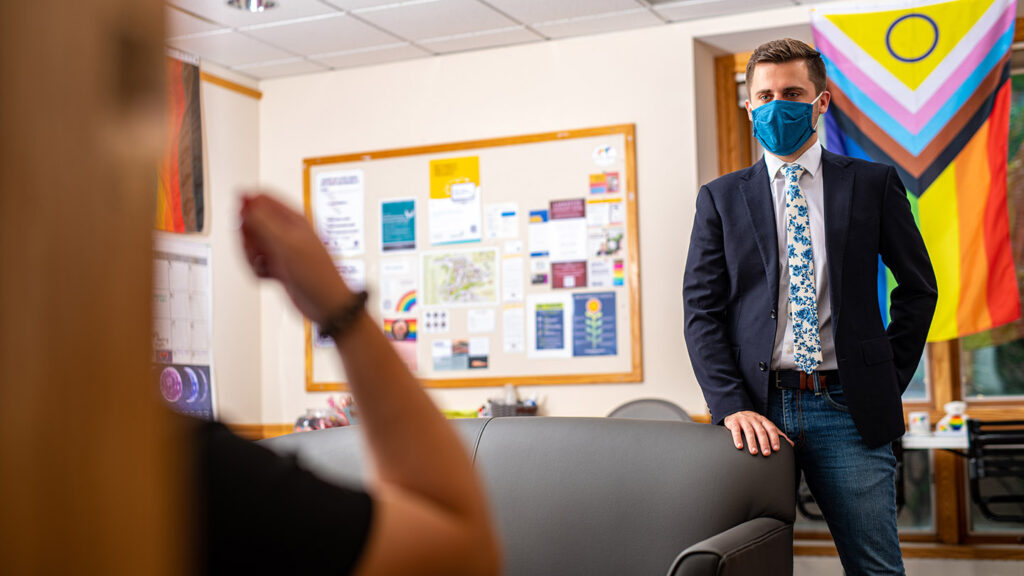 Lee in the Gender and Sexuality Resource Center in Farinon

On making the GSRC a fully utilized space

“Most people say they’ve never been in the Gender and Sexuality Resource Center. This space existed, but was not utilized or left to be accessible to the students. I want to make it very clear that to access myself or this room [the GSRC] or anything we do, that you don’t have to be ‘out’ just to come in.

“With this space or our services being underutilized, it might be an issue of not knowing what Lafayette does or offers. We might have some policies in place, but there’s just no knowledge about them. But I think there’s also this perception that the school could be doing more to meet where a lot of our competitors are, and get ahead of the curve on these topics.”

On the Campus Pride Index

“On the Campus Pride Index, which is an assessment done across the country, Lafayette currently has three out of five stars—but the last assessment was done here in 2012. I’ve already spoken with Campus Pride about getting our assessment redone. Some people tell me they think we deserve better than three stars, and others are saying they’re kind of surprised we even have three stars. We’re looking to our peer institutions that match us in size, and we’re evaluating what more needs to be done. This gives us a road map and a list of things that we can start checking off. And if we don’t offer those things to start with, we need to have conversations about how we get there. We have to improve that rating and keep it that way.”

On planning for LGBTQIA+ history month

“A lot of the films we’re showing will involve either people who are in the film, like activists, or the director of the film having virtual conversations with our community, about the significance of their film, and its content. We’re breaking down the month into four parts. The first week will show the roots of LGBTQIA+ history and highlight the astonishing impact of Pauli Murray, a far too unknown non-binary Black luminary—lawyer, activist, poet, and priest—who transformed our world. The second week is the anniversary of the murder of Matthew Shepard in 1998, so we’re going to be showing the documentary Matt Shepard Is a Friend of Mine and examine how inequality and hate crimes against LGBTQIA+ people are still very real today. We’re doing an international focus in week three to raise our global community, and in week four there’s more of a celebratory tone. We want to end it on a happy note that looks forward. It’s not only about the sad stuff and the trauma. It’s about the celebration and accomplishments of LGBTQIA+ people.

“We’re really excited about our keynote speaker, Malcolm Kenyatta, who was the first openly LGBTQ person of color elected to the Pennsylvania General Assembly and candidate for the 2022 U.S. Senate election in Pennsylvania. He was also a keynote speaker for the Democratic National Convention last year and an OUT 100 honoree. We’re really excited to have him talk about the historical significance of his campaign, but also what Pennsylvania could be doing to advance LGBTQIA+ equality.

“Throughout the month I want LGBTQIA+ students, faculty, and staff to be celebrated and to feel seen. This month is just the beginning of the work ahead. We can bring in speakers, and we can show a film. But if a student is unable to access gender-affirming care, or if they’re not having a faculty member address them with the right pronouns, that kind of devalues any programming that is put on.”

Programs, workshops, and events commemorate the history, culture, and trailblazers of our LGBTQIA+ community