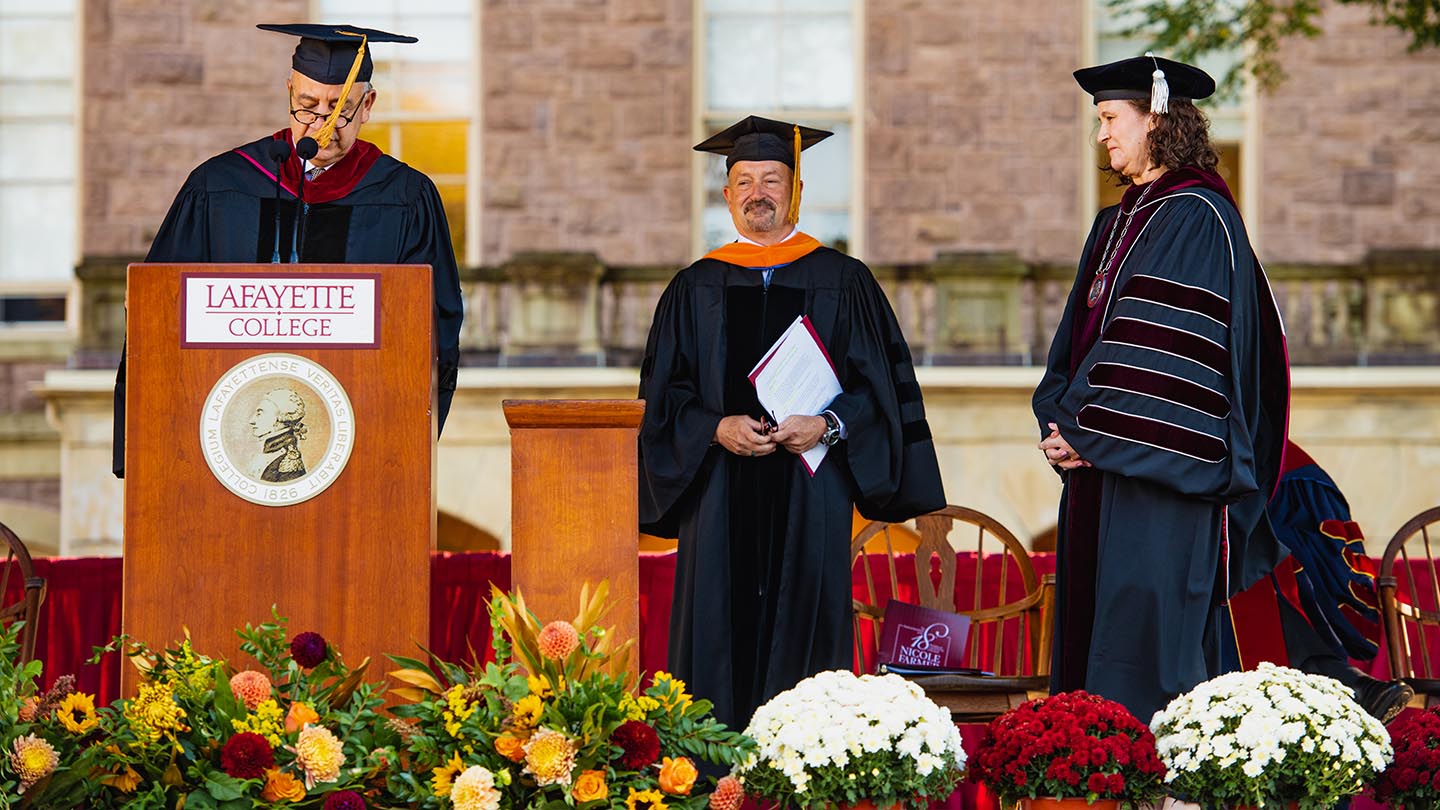 In a ceremony steeped in academic tradition, pageantry, and a visionary challenge for the future, Lafayette College inaugurated Nicole Farmer Hurd as its 18th president Oct. 1 before an enthusiastic audience gathered on a sun-washed Quad.

Hurd’s installation, capping off a weeklong series of events celebrating her inauguration, was attended by members of every graduating class since 1954, faculty, students, staff, trustees, guest speakers, former Lafayette presidents, and delegates from more than 30 colleges, universities, and associations.

A religious studies scholar and founding CEO of College Advising Corps, the nation’s largest college access program, Hurd was named president of Lafayette in May after a six-month international search. She succeeded Alison Byerly, now president of Carleton College, who served as Lafayette’s president from 2013 to 2021.

Presented with the charter and statutes of Lafayette College, Hurd took the oath of office, administered by Robert Sell ’84, chair of the Board of Trustees and presidential search committee, on a maroon-draped dais in the late afternoon shadow of Pardee Hall.

In her remarks, Hurd noted that she is in the listening and learning phase of her Lafayette journey, and shared what she described as “the DNA—the common threads in ‘becoming Lafayette.’ ”

“Lafayette is a place that makes the intersections visible and can lead by reconciling tensions. The power of alignment, not necessarily agreement, but alignment,” she said. “I want to challenge us a bit on this one. We are a place of and that too often thinks in terms of or.”

It is not liberal arts or engineering. It is not academic or athletics, Hurd said.

“It is liberal arts and engineering. It is academics and athletics,” Hurd explained. “We need to embrace the alignment, the synergy, the space where things can speak to each other, the integration of different types of knowledge.

“We should lift up the space where we take risks, we reward creativity, and we fuel innovation, where we explore different modes of inquiry, where we truly can be interdisciplinary. And we can find alignment,” she added.

Hurd observed that Lafayette is a place full of talent, goodness, and beauty, which shines from students, faculty, and staff.

“We are most powerful when our hearts and heads and hands are in alignment,” she said. “At Lafayette, we take sparks of inquiry and make them fireworks of learning.”

Lafayette is a place where talent is unleashed, potential unlocked, “where we believe we are on a lifelong journey of learning and growing and discovering,” Hurd noted. “Lafayette is a place of profound community, where we are committed to seeing and hearing and valuing each.”

Edward Ayers, Tucker-Boatwright Professor of the Humanities and president emeritus, University of Richmond, who supported and encouraged Hurd to establish CAC when they worked together at University of Virginia, delivered the inaugural address.

“One of her great gifts is seeing the world with limitless wonder and possibility,” Ayers said of Hurd, describing how she built CAC from the ground up, school by school, and won major grants to support the endeavor.

“It’s not an accident that Nicole was named Champion of Change in College Opportunity by President Obama,” he said. “The College Advising Corps has assisted over a half million first-generation, low-income and underrepresented students in enrolling in higher education.

“This is a remarkable success story,” Ayers added. “There’s not always success stories in American higher education, especially in tackling these legacies of generations of inequality and injustice.

“Now, Dr. Nicole Hurd is bringing that energy, imagination, commitment, and understanding to Lafayette,” he said. “She is bringing to you the same spirit, skill, and inspiring power that led her to act audaciously 20 years ago. But she comes to you with her modesty untarnished, her passion undiminished.”